Who are these Pittsburgh Penguins? That feels like a question that’s weighing on the minds of everyone who follows the Penguins on a nightly basis. Is this a poor defensive team that’s piling up victories due to their stellar goaltending? Are they a potent offense, capable of winning 6-5 hockey games? Can they win tight-checking, low-scoring affairs? The answer to all of those questions is yes, it just depends on what group decides to show up on any given night.

We’re just about seven weeks into the 2015-16 NHL season and with December approaching, it’s time to get out of the experimental mindset and truly assess what’s working. Despite a fair amount of poor play, coaching controversy and an inability to score goals, the Penguins have managed to make it this far with a 12-8 record, which is good for third place in the Metropolitan Division. They’ve defeated a few really good teams, lost to a few bad teams and still have plenty of questions about which category the Penguins themselves belong in.

There are however a few valuable lessons that we’ve learned so far. And, in reality, that’s what October and November are for in the NHL. It’s a long season that provides two months of trial and error before hitting a five-month regular season grind to determine those that will earn post-season contention. Unfortunately, some teams experience a start that’s nearly impossible to recover from but for most, things are just starting to get interesting. Interesting is one category the Penguins definitely fit into.

Jim Rutherford, Penguins’ GM, has been clear and concise in saying that despite Pittsburgh’s ability to stay afloat, there are still areas that need improvement. He hasn’t specifically called out the coaching staff but like Dejan Kovacevic wrote in a recent column, he hasn’t exactly praised them either. Throughout most of the hustle and bustle surrounding Mike Johnston, his assistants have remained mostly out of the spotlight but that doesn’t mean they aren’t on the hot seat as well.

The Penguins have high expectations, as do their fans. When you deploy a team that boasts Sidney Crosby, Evgeni Malkin, Phil Kessel, Kris Letang and Marc-Andre Fleury, you’re expected to be a contender and right now, you can’t say that about this group. They’ve played admirably since having a players only meeting last weekend in Newark but will that continue? If it doesn’t, I imagine Rutherford won’t hesitate to pull the trigger on change. A trade is inevitable at this point, as Rutherford is on the market for a top-four defenseman. If this team can’t keep it together, the next change will involve the guys standing behind the bench.

#2 Crosby’s Days of Dominating the NHL Are Likely Over

Ok, before you start yelling at your computer screen hear me out on this one. Hands down, Crosby is still the best player in the game. His slow start to 2015-16 isn’t enough to dethrone him just yet. But, with the continued rise in talent across the league and Crosby nearing his 30’s, we’ve likely seen the last of him separating himself from the herd in the scoring race. In fact, he may not even be the most dominant player on the Penguins anymore.

Consider the following chart, which includes those that were consistently at or near the top of the NHL scoring ranks. You’ll notice a trend, which occurs right around the 28-29 year-old mark. 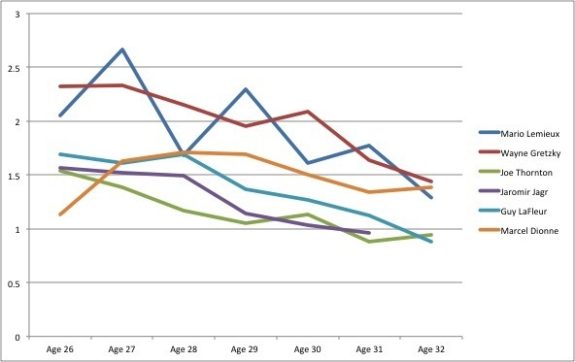 Crosby has the skill set that may allow him to defy the odds. But, history isn’t on his side. This season has been a wake-up call up to this point and while I’m very confident that Crosby will increase his production as the season progresses, I don’t believe he can reach the pinnacles that he once did.

First, let’s be clear that the Penguins simply couldn’t afford Martin this summer. They’re a team that’s crippled by too many veteran contracts as it is and they couldn’t take that risk. Plus, signing him meant less offensive depth, another area that needed a serious face lift in the offseason. So, while the Penguins certainly miss Martin, I’m not pinning this on Pittsburgh as a bad decision this summer.

However, that doesn’t take away from the fact that it’s painfully obvious they weren’t able to fill the void left behind by the veteran defenseman. His presence was felt when they faced the San Jose Sharks last night and watching him with Brent Burns was a reminder of what he offered Kris Letang while with the Penguins. He provides a steady hand and heads-up play while allowing dynamic players like Burns and Letang do what they do best with the puck. There’s simply no one in Pittsburgh right now that can accomplish that feat to the level of Martin. And, it’s not even close.

Brian Dumoulin could be the eventual answer for a top-pairing role alongside Letang. He looks to fit the mold and continues growing each and every night. He has been a steady force on defense with very few mistakes and his play in the defensive zone is exactly what Letang needs in a partner. While I’m still waiting for Johnston to eventually give him his shot, there’s no denying that while he may succeed, it won’t be to the level of Paul Martin. At least, not for the foreseeable future. It’s bittersweet seeing Martin play so well for his new team in San Jose.