The need for more secondary scoring has been a common refrain from Pittsburgh Penguins fans for a long time. The general idea is that despite an embarrassment of riches at the top, the team’s scoring ability drops off sharply the further down the roster you look. So if the top two lines are shut down, as we saw on Sunday against the Devils, the Penguins are pretty much hopeless since the third and fourth lines cannot be counted on to consistently (or even sporadically, for that matter) provide enough offense to smooth over a rough patch.

But just how realistic is this perception? Is there enough of a deficiency in the lower ranks to necessitate a trade?

At first glance, the numbers seem to say yes. The Penguins haven’t had trouble filling the net so far this year – they currently sit at ninth overall in 5-on-5 goals per 60 minutes – but by and large the production has been led by the top six forwards. The bottom half of the team only contributed 26% of those goals. And that  ratio is likely to skew even further in favor of the top six forwards once Evgeni Malkin gets it going offensively.

Well, not so fast. Let’s look a little deeper before we jump to any conclusions.

First off, generally speaking, shouldn’t a drop off like this be somewhat expected?

Aren’t the players on the top two lines there specifically because they are more talented than the rest of the team – meaning it’s unrealistic to expect much from the rest of the roster who are supposed to function in more of a defensive role?

Or is it a matter of perception because the Penguins top two lines – featuring two of the best players in the world in Sidney Crosby and Evgeni Malkin, and a budding superstar in James Neal – are so good that the rest of the roster only looks bad by comparison?

In search of an answer I decided to see exactly what other teams get from their third and fourth units.

First, I needed a suitable peer group. Due to the fluctuating nature of line combinations, it wouldn’t be accurate to go through each team’s depth chart and pick out the players by their current line designation. So instead, I decided to go by ice time. I started with a list of all players appearing in four or more games, then sorted by 5-on-5 Time on Ice per 60 minutes, and cropped off the top 180 (30 teams x 2 lines x 3 players = 180). And voila! We now have a pretty good approximation of the players seeing regular third and fourth line shifts.

(All numbers come via the indispensable Behind the Net and are current as of the beginning of Tuesday, February 12th.)

And looking at this group it would appear again that the Penguins really do have a problem. Of all the teams in the league, only five – the Penguins, Flames, Red Wings, Avalanche and Sabres – do not have a third or fourth liner that is averaging 0.9 G/60 or higher. (Remember that’s not goals per game, that’s goals per 60 minutes of ice time for each individual player). And another troubling fact is that the Penguins only have three total third and fourth forwards that have recorded a goal at all. Only seven teams (Buffalo, Carolina, Calgary, Detroit, Minnesota, Nashville and St. Louis) have fewer.

Looking back historically this isn’t the first time the Penguins have found themselves in this situation. Matt Cooke is the best of the bottom six with 0.85 G/60 and also led the team last year with 0.92 G/60. To find a bottom six Penguin with a G/60 average over 1, you have to go all the way back to 2010 when Pascal Dupuis led the group with 1.14.

But how does this compare overall? Remember earlier when I said that the Penguins bottom six forwards have contributed only 26%? It turns out that’s not terrible. Out of the top ten 5-on-5 goal scoring teams, Pittsburgh’s 26% from third and fourth liners puts it 6th in the group. They certainly aren’t getting low-level production like the Canucks and Leafs, but they’re a long way from Buffalo – which should probably just change it’s team name to the Fightin’ Vaneks at this point. I think it’s safe to say the Penguins secondary scoring is simply mediocre. 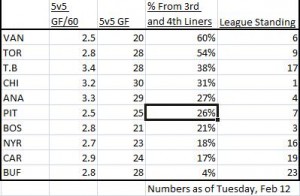 You can also see that secondary scoring is never a bad thing so it couldn’t hurt to build out that portion of the roster. With the exception of Tampa Bay, there’s a clear correlation between the teams’ places in the standings and the contributions they get from third and fourth line guys.

So is Pittsburgh’s mediocrity on the lower half now serious enough of a problem to warrant moving out some prospects? I think it could go other way, but I’m generally inclined to say no.

First of all there are more pressing issues.

I think the biggest problem right now is with Evgeni Malkin, and if the Penguins are going to address anything, it should be who plays the other wing opposite him and James Neal. Malkin is undeniably slumping right now, and I don’t know if it’s because he’s still adjusting to the smaller ice after playing in Russia, but changing his (and Neal’s) linemate certainly couldn’t hurt. Eric Tangradi and Zack Boychuk have added absolutely no value whatsoever, and if none of the other forwards can step up, that’s probably where Ray Shero should be focusing his efforts.

But after losing Brain Strait, Carl Sneep, Ben Lovejoy how many more assets do the Penguins have to trade away? I’m not sure either problem is dire enough to sacrifice any more depth.