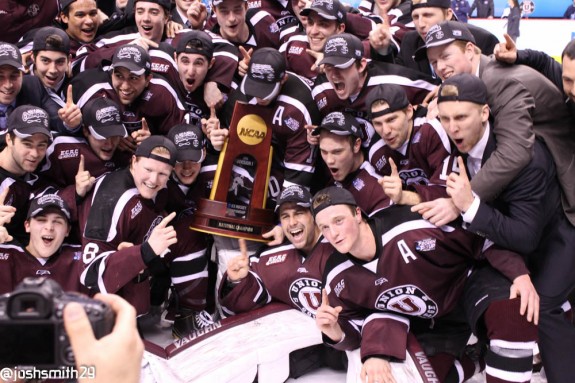 I was an addict of Glen Macnow‘s on 610WIP in Philadelphia during my teenage years.  Every night before bed, I’d listen to him on the radio.  In 2005, he mentioned his Boston Terriers won the Beanpot yet again.  I didn’t know anything about college hockey prior, but since that broadcast, I’ve been avid Terriers fan ever since and a devoted fan of college hockey.  I watched from my seats in the Verizon Center in the 2009 National Championship game as BU scored two goals in the last 54 seconds to tie the game and then win in dramatic fashion in overtime.

I was fortunate enough to cover the Frozen Four this past weekend at the Wells Fargo Center.  Boston College faced off against Union College in the semifinals.  If you know anything about Boston College and Boston University…they hate each other.  The Dutchmen were able to hold off Boston College to advance to the National Championship game – which they would eventually win. 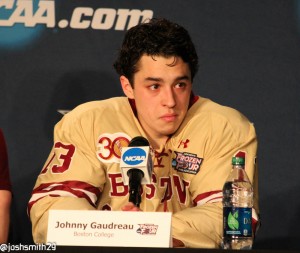 Immediately, I went down to the locker rooms to interview some of the players.  As a BU fan, I should have had pure elation that BC was knocked out, but after spending a few minutes with the players, I felt a deep sense of remorse seeing these kids on the verge of tears.  At BC’s press conference, John Gaudreau nearly broke down speaking about this season and what it was like playing with his brother.

To them, hockey is everything.  Players train around the clock for a chance to perform on college hockey’s biggest stage.  Countless hours are spent at the rink fine-tuning their games to play at an elite level each and every night.  The winning team always experiences the thrill of victory while the losers deal with the agony of defeat.  And with that, many lessons can be learned from both sides.

The winners show the grit and determination needed to sustain that pace throughout the season.  Playing the toughest teams in the country and persevering is a testament to the preparation by both players and coaches.  The persistence and sheer will power of a collective is the difference between success and failure.  It’s something each individual can take with them to the professional level.

What you learn through winning you learn in defeat twofold.

The pain of losing a game of such magnitude cuts deep into players hearts.  The shock so overwhelming that it changes a player’s perception of how to play the game.  The best skaters experience the heartache associated with losing and never want to experience the feeling again.  Developing the “hate to lose” mentality separates good players from great players; good coaches from bad coaches; good teams from bad teams.

Having that killer instinct means never throwing in the towel, fighting till the final whistle, going all in when all you have left is the clothes off your back.  The mentality is not something that can be developed through coaching.  Players must experience the lowest of lows after a championship game before they can build from it. 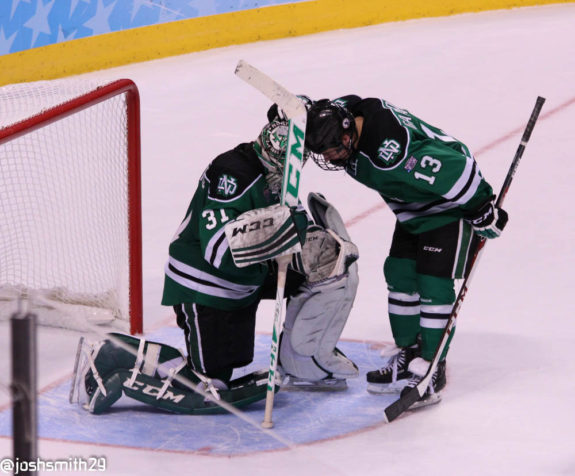 North Dakota loses to Minnesota in the semifinals of the Frozen Four. [photo: Josh Smith]

It’s why you see teams come back and win the National Championship shortly after getting sent home a few years prior.  Union College was in the Frozen Four in 2012 and were eliminated in the semifinals.  This year, they came back with a vengeance and attitude that they weren’t going to be beaten.  The lessons learned from victory and defeat will be engrained with these players for the rest of their lives.  Malcolm X said it best:

“There is no better than adversity. Every defeat, every heartbreak, every loss, contains its own seed, its own lesson on how to improve your performance the next time.”