Breakaway: The Inside Story of the Pittsburgh Penguins’ Rebirth

Once upon a time, the Pittsburgh Penguins’ former home, the Mellon Arena had been one of the most architecturally stunning buildings of its time. It was first named the Civic Arena when it opened in the 1960s and was built with a stainless steel dome roof that could open in warm weather. The building hosted orchestra performances, concerts and, of course, Pittsburgh Penguins hockey.

But over time, the building was no longer suitable for major events. Artists would skip Pittsburgh on concert tours, and hockey fans began to feel inconvenienced by crammed concourses, worn-out seating and lack of personal space. It was clear Pittsburgh needed a new arena.

Breakaway: The Inside Story of the Pittsburgh Penguins’ Rebirth covers the Penguins’ quest to get the new building. Author Andrew Conte, a reporter with the Pittsburgh Tribune-Review, presents the stories of the people involved in the arena quest and also details how the Penguins were performing on the ice to show how interest of the team went up and down, particularly in the early 2000s and after Sidney Crosby was drafted in 2005.

Two of the key figures mentioned throughout the book are Penguins legend Mario Lemieux, who ended up buying the team after retirement, and David Morehouse, the Penguins president who used to work on political campaigns but wanted to come back to Pittsburgh, where he grew up. In fact, Conte makes Morehouse relatable by telling stories of how he used to sneak into Penguins games with his friends when he was younger and could not afford a ticket. 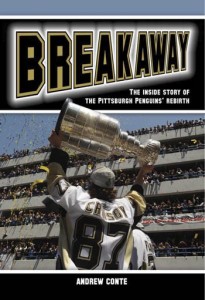 The book covers the town hall meetings held that eventually brought an agreement for the city to build what is now Rivers Casino and the Consol Energy Center. It tells of the fans who attended and waved Terrible Towels during the proceedings. These meetings became quite vocal at times and the saga changed as different ownership candidates pulled out and others stepped forward, such as another native Pittsburgher and Motown legend Smokey Robinson.

Conte also takes Penguins fans down memory lane to relive the team’s on-ice performances during the quest to get a new arena. Readers will get a look at how team executives reacted when the lottery ball was pulled in 2005 and the Pens found out they would be drafting junior hockey star Sidney Crosby. However, amid the celebrations, there is also controversy that recalls how Evgeni Malkin had to escape his Russian team and hide out while negotiating to join Pittsburgh for the 2006-07 season.

The team’s rebuild is covered from that point forward, showing how stars like Crosby and Malkin grew up under new Pittsburgh coach Michel Therrien. The book goes back through the heartbreak of the team falling to the Detroit Red Wings in the 2008 Stanley Cup Finals and being in 10th place in the Eastern Conference in 2009, which led to Therrien’s firing and the promotion of current coach Dan Bylsma. That also brought on the deals for players such as Chris Kunitz and Bill Guerin who helped the team earn its first Stanley Cup since 1992.

The book culminates with the opening of Consol Energy Center in August 2010 as Lemieux and Morehouse sit in Lemieux’s ice-level suite, Suite 66, and reflect on how far the Penguins and the city have come. It also talks about the team’s first game in its new home and the moment where Lemieux skated to center ice to pour out a vial of water containing ice from the old Mellon Arena.

Breakaway is a great read for Penguins fans, especially those interested in the business side of the team. Although it does not have all positive stories, Pens fans should be able to appreciate that the team has come a long way since the pre-Crosby days. No more do the Penguins play in an arena with power outages in the middle of the game and cramped locker rooms.

Anyone reading this will also learn about how general manager Ray Shero brought in a personable atmosphere and wanted to get players out in the community. This captures the heart of the city as well as that of the Penguins. Those who live in the area will see Conte’s writing in their everyday lives as Pens players deliver season tickets and hand out pizza to those in line for student rush.

Regardless of how long readers have been following the Penguins, this book is intriguing and is good for any hockey fan who can’t get enough of what goes on behind the scenes in the front office.