Thursday featured one of the best games of the NHL season. Oh, also the Nashville Predators and Toronto Maple Leafs played. The Tampa Bay Lightning and New York Islanders combined for 13 goals while the Predators were merely a speed bump for the Leafs. Besides an incredible pass from P.K. Subban to Viktor Arvidsson, the Predators never seemed to test Frederick Andersen. Even though they won the high danger chance battle, the Predators were never much of a threat.

Honestly, this game was a snoozefest. The Predators looked tired and the Leafs looked angry after a tough loss to the Lightning. Not even Pekka Rinne could save the Predators, and he probably shouldn’t have played! It was one of the weaker defensive showings by the Predators, although they faced some elite offensive talent. Let’s start with some positives before we get into what went wrong.

Kevin Fiala is one of the more underrated Predators this year, as his point totals don’t reflect his overall brilliance. He’s one of the few possession driving wingers in the league and his linemates have reaped the rewards. While he didn’t score any goals, Fiala made a positive impact on the ice. For reference, I’m using unblocked shot attempts (Fenwick), goals, high danger chances (HDC), and zone starts for (offensive) and against (defensive), all stats are at five on five. 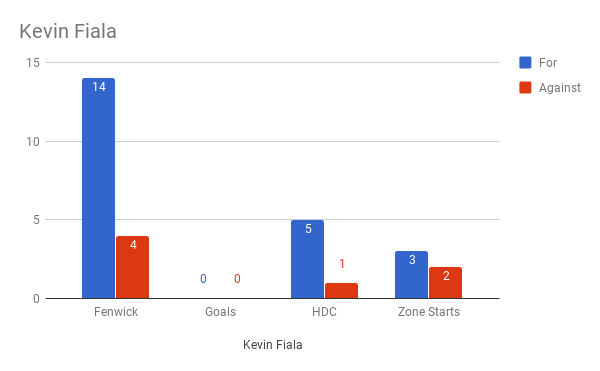 All in all, it was a good night for Fiala. While he didn’t produce any points, he didn’t surrender any. The Leafs never really found their way to the front of the net while Fiala was one on the ice and only managed one high danger chance. This wasn’t due to a lack of quality competition as Fiala spent the majority of his five-on-five time against Austen Matthews’ line.

Otherwise, Fiala was everywhere in the offensive zone and one of the only Predators who looked dangerous throughout the game. Of the five high danger chances that occurred with him on the ice, Fiala was responsible for three of them. Nikita Zaitsev and Roman Polak simply could not keep up with the young star.

Fiala also handily won the possession battle, even when adjusted for venue and score. Thursday’s game is like the story of Fiala’s season: an incredible game where the Predators dominate when he’s on the ice but he doesn’t score any points. Those points will come as Fiala is my pick for the next Predator to score 40 goals.

James Van Riemsdyk, or JVR, is one of the best power forwards in the NHL today. His hands around the net along with his big frame leave many defensemen frustrated and confused whenever he makes his way to the net front. Thursday was no different as the quick, yet small Predators’ defense had no solution for the lumbering big man. I’m using the same stats as earlier,still at five on five. 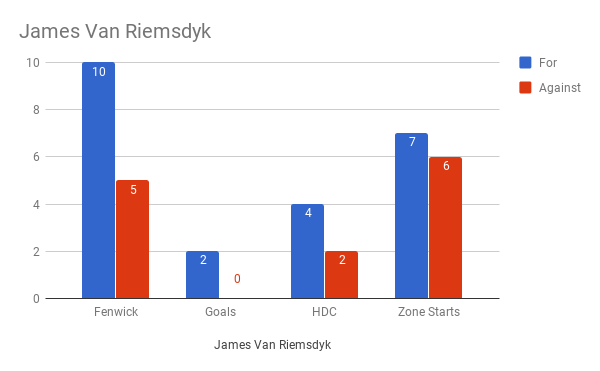 I miss the 90s where guys like Owen Nolan and Brendan Shanahan terrorized the NHL with 82 points and over 100 penalty minutes. Guys like JVR and Wayne Simmonds are fun reminders of the old days and good examples that power forwards can thrive in today’s league, as long as they’re as skilled as they are tough.

JVR was skilled enough as he dominated the Predators. He ended the night with two points, including the opening goal on the power play. Otherwise, he contributed with two hits and two of the four high danger chances while he was on the ice.

He wasn’t great in his own zone but that’s not necessarily his job. Head coach Mike Babcock does a great job of using his speciality players and putting people in positions to succeed. JVR’s success, in my opinion, is telling of the two coaches in this game. Peter Laviolette couldn’t match his best defensive unit against JVR despite having the last change and his Predators paid the price for it.

I can’t believe I’ve gone this far without mentioning Auston Matthews, Mitch Marner, or William Nylander. It doesn’t matter who you like most (Marner for me, go Knights), all three are bonafide stars and will dominate the league for at least a decade. They put their skills on display in Nashville and the stats reflect it.

The young guns combined for three goals and four points, all of which were primary. They’re deadly from anywhere on the ice, even in the high danger areas despite none of them being big immovable guys. The Leafs’ offense is almost otherworldly, as it contains a fun mix of big players and small guys who are absolute wizards with the puck.

I’ve said it before and I’ll say it again, Marner on the power play is must-watch hockey. Maybe even more than when the Lightning have the man advantage. This leads to one of my favorite expressions, as coined by Steve Dangle, “Mitch did the Mitch thing.” Well, Mitch did the Mitch thing and it ended with JVR scoring the first goal of the game.

All three were incredible and are only getting better.

On to the Next One

The Predators travel to the state of hockey to take on the Minnesota Wild on Saturday. The Wild are fighting for the third spot in the division as they sit with 90 points, two points ahead of the Colorado Avalanche. We’re at the time of the year when it’s “playoffs lite”. Teams are fighting and laying it all on the line to increase their playoff stock but that’s what separates the Predators from the herd.

Their spot is assured and they should take this time to rest their stars. There’s no reason why guys like Ryan Johansen, Filip Forsberg, P.K. Subban, and Pekka Rinne should be sniffing ice time at this moment. But who knows what will happen, as the Predators’ coaching staff hasn’t seemed willing to adapt.