The Nashville Predators announced a new signing of an old face. Mike Fisher in making his return to the Music City, and it’s not exactly a good move.

The Central Division is once again the Thunderdome and teams are loading up. The St. Louis Blues are looking at Mike Hoffman, the Stars are looking at Rick Nash, and the Nashville Predators made the first move by signing… Mike Fisher. In his last season, the 37-year-old amassed 18 goals and 42 points in 72 games as the Predators’ second line center. A fine season, but things got worse as the season went on. By the second round of the playoffs, Fisher was huffing and puffing after every shift, and the concussion he received courtesy of the Anaheim Ducks didn’t exactly make things easier. After the Penguins lifted the Stanley Cup, Fisher decided to hang ’em up and seemingly rode off into the sunset, never to be heard from again.

Well about six months later, Fisher and the Nashville Predators made the announcement that the old captain was making his return. So with all of the excitement buzzing, let’s take a somber moment to realize that this signing isn’t much more than fan service.

Here’s where things start to get a little bit messy. At first, I thought it was a planned move where Fisher would take his time to recover and make his return when he felt ready. Eventually, news broke that general manager David Poile had to coax Fisher out of retirement. As more details surfaced, Fisher admitted he wasn’t exactly working out all that often and had only skated once since retiring, at the Senators’ alumni game.

I’m not saying that a 37-year-old cannot play in today’s NHL after taking almost eight months off, but it’s a bit of a stretch. Especially considering that the Predators will be thrusting Fisher into a defensive bottom-six role, where he’ll likely be charged with shutting down a second line. This will not be an easy task as younger, equally skilled players like Calle Jarnkrok and Nick Bonino have attempted to do so night in and night out. This leads me to the biggest question of Mike Fisher’s return – who does he replace?

Who Are the Candidates?

Let’s get one thing straight, the top nine will not be touched as long as the injury bug doesn’t rear its ugly head. That leaves the fourth line, which consists of Miikka Salomaki, Austin Watson, and Colton Sissons. Fisher is a right-handed center but may be forced to play wing in the early parts of his arrival. Head coach Peter Laviolette loves to have symmetry among his lines where a left-handed shot is on the left wing and a right-handed shot is on the right wing.

This bodes well for Salomaki who’s a lefty. Other than that, Salomaki is one of the grittiest players on the team. He forechecks with a unique ferocity and never gives up on the pick. He’s one of the big reasons why the fourth line is so good at maintaining offensive zone possession. Salomaki’s offensive totals aren’t great, but seven points in 38 games are acceptable when you consider that all have come at even strength and he starts in the defensive zone 34.3% of the time.

Despite this lack of shelter, he still maintains a 51.21% Fenwick and helps the Predators produce more than 55% of the high danger chances while he’s on the ice. He’s an excellent shot suppressor and a decent offensive player. His best strength is his ability to get the puck out of his defensive zone.

Austin Watson is very similar to Salomaki in that he’s a gritty winger who excels in the defensive zone. These two are the best shutdown wingers on the team, and probably in the Central Division, too. Watson is a bit better in the offensive zone, although he also has seven points in 51 games. His possession stats aren’t exactly stellar, but he suffers similar zone starts to Salomaki.

The biggest issue for Watson, in my opinion, is that the Predators only manage 46% of the high danger chances while he’s on the ice. What the advanced stats don’t tell you is that Watson is the best penalty killer on the team and is used exclusively in defensive situations. He also fights, and while I think fighting isn’t necessary in today’s NHL, having an “enforcer” who can play excellent hockey is a bonus.

Then there’s Colton Sissons. The center of the trio is having a better offensive season, but sees extensive power play time. So far, Sissons has 18 points in 52 games with 10 at 5-on-5. Sissons is a pretty average player, with a 50.9% Fenwick despite starting in the defensive zone 34% of the time. He suffers the same issues as Watson as the Predators get beaten at high danger chances when he’s in the game. In my opinion, Sissons is a lukewarm player who may not bring too much to the table, but is far from a hindrance.

Knowing everything we know about Laviolette and the stats, Salomaki should be safe. While Sissons has more of an offensive impact than Watson, it has more to do with his power play time. Watson contributes more with less and is a better defensive player, plus his penalty killing is the best on the Predators. That leaves Sissons.

Now that we’ve singled out Sissons as the most likely player to be replaced by Fisher, let’s compare the numbers.

Comparing people year by year is tough because there are some qualifiers. So far, Sissons has played 20 fewer games than Fisher did and played about five minutes less per game. So, in order to combat this, let’s use percentages. Check out the nifty chart below. For reference, I’m using unblocked shot attempts (Fenwick), high danger chance percentage (HDC%), goal percentage, and offensive zone start percentage. 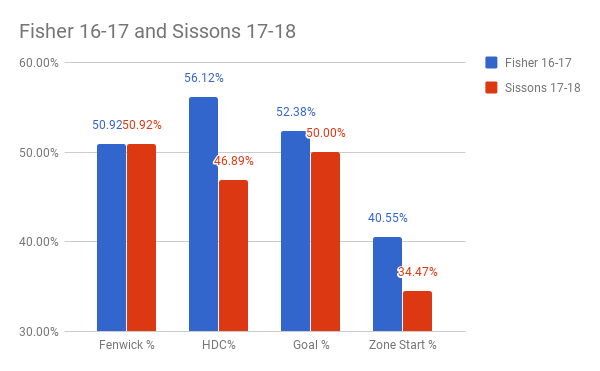 Just from a quick look above, it looks like Fisher has Sissons beat, but let’s add some context. Fisher had better players on his wings, most notably James Neal, while Sissons is used in a less offensive role with more defensive players. Even though Fisher wasn’t sheltered by any meaning of the word, Sissons has worked with less. My favorite find of all of this was that both played the majority of their time against second and third line talent, despite being on the “second” and “fourth” lines.

The one thing I keep coming back to though is the high danger percentage. Fisher beats him by just under 10%. Here’s where speculation makes an entrance. I don’t think Fisher could do any better playing in the same situations as Sissons. Fisher is a better offensive player, but that won’t be his role.

Is This a Good Signing?

Quite simply, this move is just fan service to bring back a Nashville legend for one last ride. He’s not an improvement over any player and I honestly don’t think he’s an improvement over guys like Frederick Gaudreau or Emil Pettersson, who are toiling away in the minors.

The only way to tell how this will work out is to see how Fisher plays. I’m not excited about it and I don’t really buy into the intangibility argument. I don’t think this brings the Predators any closer to the Cup, and if anything, it might actually hinder them if Fisher plays too much.