The slump is over! The Nashville Predators triumphed over the Minnesota Wild not once, but twice last night. Unfortunately, a very close, but correct offside review called the game back and overtime resumed. Kyle Turris then capped off a good night by scoring in the shootout and pushing the Predators out of their slump.

Tuesday night saw a return to form, as well as one of the better defensive games this season. It wasn’t perfect by any stretch of the imagination, but it was way better than when they hung Juuse Saros out to dry in Winnipeg the other night. One defenseman in particular deserves to be highlighted as he had his first great game in what feels like a while.

Guess Who’s Back. His Initials Are P.K.

P.K. Subban is back! The mid-season Norris contender has experienced a rough second half of the season, and while there are many reasons, I have a theory. I think Subban is playing through injury, plain and simple. It feels like once a week that I see him take a shot off the foot or a late hit and he limps off the ice before returning and playing the remaining 10 minutes of a game.

He’s had a return to form on Tuesday, as he showed flashes of the shutdown defenseman we all knew last postseason. For reference, I’m using unblocked shot attempts (Fenwick), scoring chances (SC), high danger scoring chances (HDC), and zone starts for (offensive) and against (defensive). All stats are at even strength. 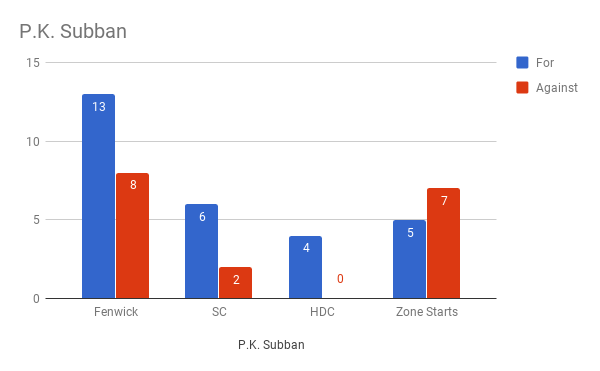 There are a few elite defensive defensemen in the league, but Marc-Edouard Vlasic, Hampus Lindholm, and Subban easily fill out the top three. If I wanted to shut down someone, I might throw out the first two I mentioned, but if I wanted to frustrate and take a player off his game, I’d choose Subban. Subban badgered and harassed Eric Staal for just over 10 minutes on Tuesday, and kept him from even creating a single scoring chance, let alone a high danger chance. There was absolutely no shelter on Tuesday, as Subban faced top-line talent and started in the defensive zone 58.33% of the time.

This might be Subban’s best game of the season, even though he didn’t produce any capitalized offense. The fact that he could keep the Wild’s biggest guns off the scoreboard is a tremendous feat on its own, and that is worth celebrating. If the Predators can continue to rely on Subban to practically erase the impact of other teams’ first lines, the post-season might not be as scary as some think.

Possession is the name of the game in today’s NHL. Whether we measure that through shot attempts or literal time with puck possession depends on who you’re talking to, but we’ve all come to the same conclusion. If you control the puck, you control the pace, and you control the game. For reference, we’re using the same stats as with Subban, but I switched zone starts with goals, just because. 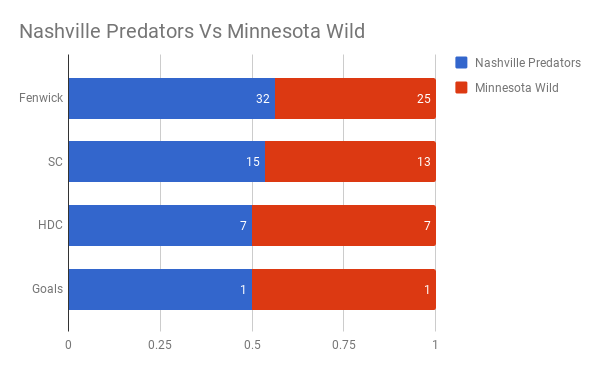 If we just count for five on five stats, which eliminates overtime, the Predators actually win the stats by an even bigger margin. The biggest difference is the high danger chances, which keeps the Predators are seven but knocks two off for the Wild. Keeping an opposing team to five high danger chances per 60 minutes is quite the feat and about two or three less than their seasonal average. This keeps Pekka Rinne from making those miraculous sprawling saves, and keeps him ready for the playoffs.

While the Predators did score their lone goal at even strength, they obviously gave up one as well, but that’s ok. It was a great give-and-go play that wouldn’t work if it wasn’t Mikael Granlund making the pass and Eric Staal tucking the puck home. Great plays happen and are inevitable, although Ryan Ellis did blow his coverage in an uncharacteristic way.

Besides that blemish, the Predators were darn near perfect. They controlled the pace and locked down the slot for the majority of the game. The Wild’s normal offensive zone presence looked about as dangerous as the Predators do on the power play, which everyone can agree is as scary as a puppy.

There’s still quite a bit of room for improvement, as the defense got locked into the corners at times, and centers didn’t always pick up their man, but overall, things were fine. This kind of defense wins championships, but the offense needs some work.

Attack of the Teal

One of the hottest teams in the NHL comes to Nashville on Thursday as the San Jose Sharks look to continue their point streak. While a lot of people have the Jets or Predators coming out of the West, the Sharks are playing some truly inspired hockey while missing their future Hall of Fame center, Joe Thornton. This could easily be a Western Conference Final preview, so a victory might inspire some confidence around the beginning of May.