For the third time this season, the Chicago Blackhawks will take on the Dallas Stars. After taking a 1-0 overtime loss to the New York Rangers on Friday, the Blackhawks look to bounce back against a division rival in the Dallas Stars. As it stands, the season series sits at 2-0 in favor of Chicago with the Blackhawks winning a back-to-back set against the Stars in November. While Chicago had a day off in between their games against the Rangers and the Stars, the circumstances for Dallas aren’t quite as good. The Stars beat the Nashville Predators at home on Thursday, lost to the Philadelphia Flyers on Saturday, and will be taking on the Blackhawks on Sunday. 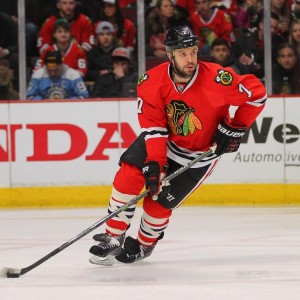 The Blackhawks won’t be getting an additional boost in their lineup against Dallas, however, as  Brent Seabrook and Jonathan Toews don’t currently look ready to return to the lineup after suffering injuries. Though they will still be without captain Toews, the center did take part in the team’s optional morning skate. Still, he is expected to miss his ninth consecutive game. The good news for ‘Hawks fans, however, is that Toews said, had this game been a playoff game, he’d find a way to play.

Playing it safe with Toews is the smart move for the Blackhawks as they look to preserve their captain for the long-run without panicking in the interim.

1)Toews is set to miss his ninth consecutive game for the Blackhawks with an injury. He did take part in the team’s optional morning skate, however, which bodes well for his recovery status.

2)The Blackhawks have outscored the Stars 7-5 in their two games this season. Both games resulted in Blackhawks wins and the Stars are looking to play catchup within the division.

3)Devin Shore scored both of the Stars goals Saturday against the Philadelphia Flyers. He’s not typically known for scoring, however, as those two markers were just his third and fourth of the season.

4)Crawford remains out of the lineup as Scott Darling looks to once against man the crease for the Blackhawks. Darling made 37 saves in Chicago’s 1-0 overtime loss to the Rangers on Friday.

5)Brent Seabrook was questionable to return to the lineup after suffering an injury against the Arizona Coyotes. It currently looks like he will miss the game against Dallas and could make his return Tuesday against the New York Rangers

6)The Dallas Stars penalty kill has been a big problem for them this year, and the Blackhawks will have to capitalize on that if they want to make up some ground now that Toews is back in the lineup.

7)For the second time in two games, Chicago will be playing against a team with a former Blackhawks goaltender. Antti Niemi, of course, was with Chicago for their 2010 Stanley Cup victory prior to signing with the San Jose Sharks. Niemi now finds himself with the Dallas Stars in a timeshare in net with Kari Lehtonen. Though Lehtonen started against the Flyers on Saturday, he’s also expected to start against Chicago.

The Blackhawks have been waiting patiently for their captain to return, but unfortunately, Sunday night won’t see that happens. Chicago is still hoping that Toews and Seabrook can return to the lineup against the Rangers on Tuesday, however, and will look to find some sort of normalcy after a weird stretch of play over the last few weeks. Though Crawford still remains out of the lineup, there’s, no reason to panic in net for the Blackhawks right now as Darling is not only holding the fort, he’s been keeping the Blackhawks in just about every game that he’s played in so far this season – including the Blackhawks last game against the New York Rangers.