The Buffalo Sabres will host longtime former head coach Lindy Ruff and the Dallas Stars in a rare Monday matinee today. The Sabres will look to get back on the winning side of things today in front of what will certainly be a younger crowd at Key Bank Center.

After a promising start to 2017, Buffalo fell flat again at the end of last week when they had the opportunity to get themselves back into the playoff race. They lost two key Eastern Conference matchups — to the Tampa Bay Lightning on Thursday and then the following evening against the Carolina Hurricanes. Instead of being within a few points of a playoff spot, they find themselves seven points back of third place in the Atlantic Division and nine points out of the final wild-card spot. The Sabres are bordering on playing themselves out of the playoff conversation if they can’t turn it around by the end of the month. 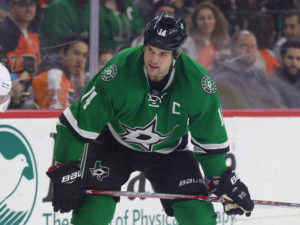 The Stars are one of the most disappointing teams so far this season. Dallas was a pre-season Stanley Cup favorite for some people. They’ve struggled to find consistency throughout the season and have fought through their fair share of injuries. Ales Hemsky was hurt in the World Cup of Hockey and has not played a game this season, while other key players like Jamie Benn, Patrick Sharp and Jiri Hudler missed some time throughout the season.

The goaltending has also continued to be a struggle for the Stars. Neither Kari Lehtonen nor Antti Niemi has taken control of the number one goaltender job. Last season, the Stars were the highest scoring team in the league which allowed them to overcome the shortfalls in net. This season they currently sit 18th in the league in scoring entering play on Monday and have not been able to overcome the goals against which they currently have allowed the fourth-most in the league.

1) The most important key for the Sabres tonight will be to start quickly. The Stars have allowed the fourth most goals in the NHL heading into play Monday with 134 goals against. Dallas has the potential to put the game out of reach if the Sabres start slowly with their firepower. Especially with Jamie Benn back in the lineup.

2) Robin Lehner is expected back in goal tonight after missing three games last week with the flu. Lehner voiced his frustration again after practice yesterday with how the team played to end last week. He knows that the questions about the team’s inconsistency will not go away until they start to put together some winning streaks.

Sabres are getting paid to do a job. They aren't doing it, Robin Lehner says: "It's time to accept that." https://t.co/JzBJ6fRcIq

3) Jamie Benn returned to the lineup for the Stars on Thursday after missing a few weeks with a foot injury. Dallas really missed their captain and star player going 1-2-1 in the games he missed. Since his return, they’ve gone 1-1, but have scored nine goals combined in the last two games.

4) Tyler Ennis will return to the Sabres lineup today after missing the last two months with double hernia surgery. The speedy winger will bring another threat to the lineup that is desperately needed. He practiced on the wing with Ryan O’Reilly and Kyle Okposo yesterday. That’s where he’ll likely slot in today and see time on the second power-play unit as well.

5) Jack Eichel only has one goal and one assist in his last five games. He’s still creating opportunities offensively but has been unable to put points on the score sheet. Head coach Dan Bylsma has put Eichel back with Sam Reinhart to see if the duo can find the chemistry that was so dangerous at the end of last season. Eichel is a huge part of the Sabres offense and if he’s struggling that usually means the club’s total production is going to take a dip.