The Buffalo Sabres host the Tampa Bay Lightning this evening in a critical playoff matchup for both teams. The Sabres and Lightning are on the outside looking in right now in the Eastern Conference playoff race. The two clubs are only separated by one point in the standings. A loss tonight by either team could be the final nail in their playoff hopes. 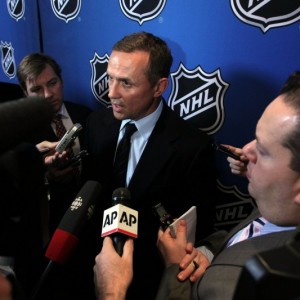 The Lightning are in an unexpected position this late into the season. After two straight appearances in the Eastern Conference Finals, they were again predicted to be a favorite in the East. However, an early injury to captain Steven Stamkos set Tampa Bay back and they haven’t been able to consistently play at the level that made them a powerhouse the last two seasons.

Lightning general manager Steve Yzerman made the decision to sell off some pieces this season to give his club some more cap space entering the offseason with Tyler Johnson, Ondrej Palat and Jonathan Drouin all due for new contracts. Ben Bishop, Brian Boyle and Valtteri Filppula were moved at the trade deadline. The future of the Lightning is now in the hands of the young core Yzerman has put in place.

The Sabres have been in this position throughout the season. They’ve been unable to get over the hump in the playoff race, but have kept themselves within shouting distance of the final spot. They’ll need to really go on a run in the final 18 games to have a chance at getting in, but it starts tonight with the Lightning. They’ve lost both matchups against Tampa Bay this season by a combined score of 8-3. Buffalo has struggled against the Eastern Conference. If they can’t beat the teams they’re chasing in the final month and a half of the season, they’ll be out of the race fairly quickly.

1) Nikita Kucherov comes into tonight on fire for the Lightning. The 23-year old has 13 points in his last five games and has been an important part of the Lightning getting themselves back into the playoff race. Kucherov is on pace to beat his career high of 30 goals and 66 points from last season. With 19 games remaining he has 28 goals and 62 points coming into tonight.

2) Jack Eichel has quietly put together a fantastic season in his second year. He’s currently on an eight-game point streak and has 40 points in 43 games this season. Eichel is on 76 points per 82 game pace right now and really shows how much the Sabres missed him in the first 21 games of the season.

3) Robin Lehner will be in goal for the Sabres tonight as he looks to get back to the way he was playing a few weeks ago. Lehner has allowed three or more goals in his past four starts, only one of those games did he pick up the win. The Lightning will start Andrei Vasilevskiy as he takes over as the number one goaltender moving forward. The 22-year old has only won twice in his last seven starts.

4) The Sabres come into tonight six points out of the final wild-card spot and seven points behind third place in the Atlantic Division. The Lightning sits one point ahead of the Sabres in the standings and is only five points out of the final wild-card spot. Buffalo can pass Tampa Bay tonight with a regulation win and get within four points of a playoff position. These next three games for the Sabres against the Lightning, Pittsburgh Penguins and Philadelphia Flyers are critical to salvaging the season.

5) Kyle Okposo will miss at least the next two games with a rib injury. He leads the team in points in his first season after signing as a free agent in July. The Sabres will miss him in the top six playing important minutes as well as his presence on the top power play unit.