After the morning skate Tuesday, Johnny Cash’s “Folsom Prison Blues” rolled through the Dallas Stars’ dressing room speakers. While the original Man in Black is never a bad musical choice, the Stars’ current theme song should probably be Merle Haggard’s “If We Make It Through December.” 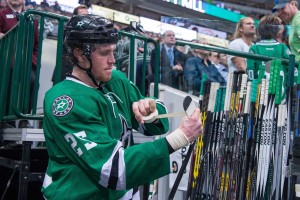 30 games into the 2016-17 season, the Stars are in trouble. Though they currently sit just two points out of the second Wild Card playoff seed, the current occupant of that spot, the Los Angeles Kings, has three games in hand on Dallas. So, too, do the Nashville Predators, who are tied (for the moment) with the Stars.

The Boys in Victory Green finish out the month with seven of eight games at home. Realistically, they need at least five wins just to keep their playoff hopes alive. As Jamie Benn said Tuesday morning, the Stars have to focus on one game at a time.

The pressure is most definitely on the Stars, and their uphill battle begins tonight against the Anaheim Ducks. If they make the most of this homestand, well…to paraphrase the late, great Merle Haggard, if they make it through December, they’ll be fine.

1) Fun with Numbers: The opening twenty minutes will be key for the Stars: The Ducks are 9-1-0 when leading at the end of the first period, but 0-5-4 when trailing. Dallas needs to score early and often.

2) Fun with Numbers, Part Two: If Dallas doesn’t have a multi-goal lead going into the final frame, things could go south in a hurry. The Stars have allowed a league-high 35 third-period goals, while the Ducks have surrendered a league-low 15.

3) The Stars didn’t have any line rushes Tuesday morning, so the projected lines are a semi-educated guess. Curtis McKenzie and Patrik Nemeth skated late with the suspended Jamie Oleksiak, so those are your probable scratches.

4) Plano, Texas, native Stefan Noesen returns to the Metroplex Tuesday night as an NHL player. Noesen, who scored 78 goals in 52 games with the Dallas Ice Jets as a 13-year-old back in 2006-07, tallied his first NHL goal December 7 against Carolina. Give Anaheim’s number 64 a warm welcome tonight. He’s just the seventh son of the Lone Star State to skate in the NHL.

5) Brett Ritchie went out to dinner with his brother, Nick, Monday night. Tonight, they’ll see each other from opposite sides of the ice, as Nick is a left wing with the Ducks. Said Brett of his younger brother, “Whenever you get to see him, it’s good. Once we get on the ice, though, it’s a different story.” The two have never fought (not on the ice, anyway), but there’s a first time for everything.

6) Stars coach Lindy Ruff made a good point while answering a question about his goalies this morning. “I think the biggest thing that’s hurting us is, it’s one mistake and we’re not scoring enough goals…it’s hard to just point at the mistake that the goal went in, because there’s five other mistakes that the goalie made the save on.” Last year, the Stars largely outscored their mistakes; this year, not so much.