Since Alain Vigneault became head coach of the New York Rangers before the 2013-14 season, the team’s annual three-game trek to California has been a mixed bag, with successes and failures varying wildly depending on the year.

And that doesn’t even include the emotional tumult of losing three overtime games –including a pair in double OT — to the Los Angeles Kings at the Staples Center in the 2014 Stanley Cup Final. 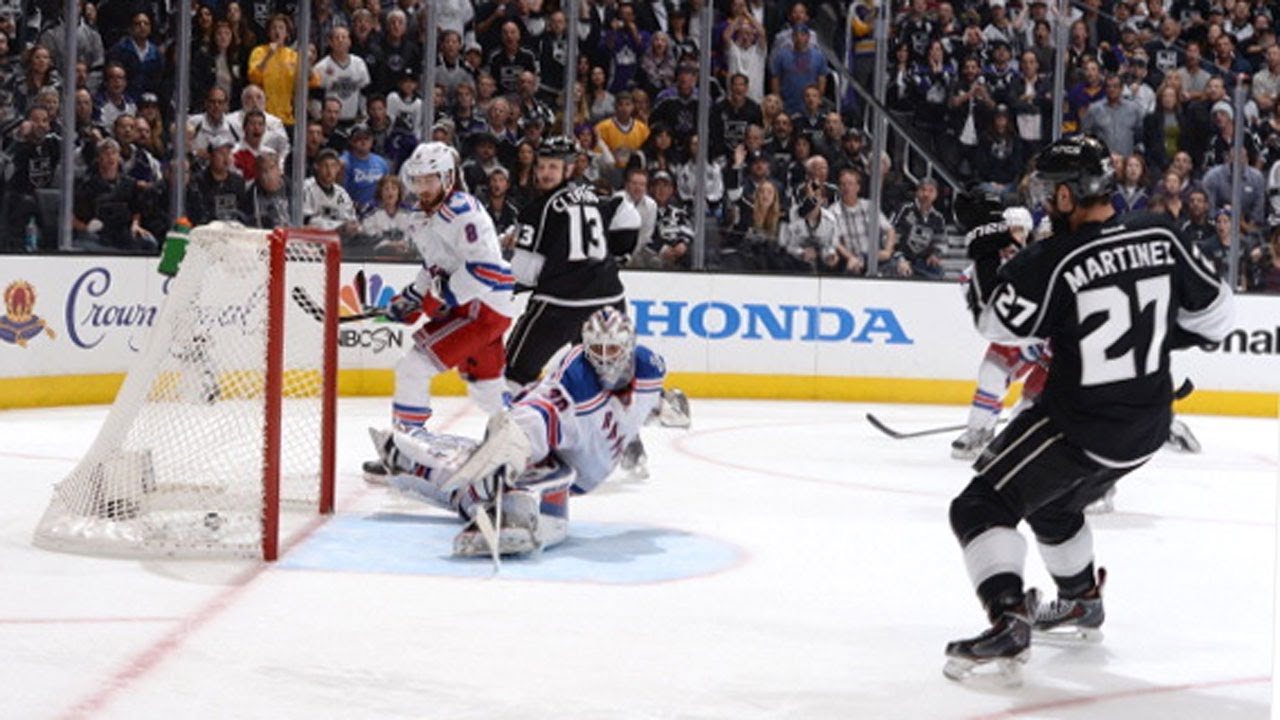 The Rangers traveled to California Thursday, practice today in Los Angeles, and kick off three-games-in-four nights in California Saturday against the Kings.

Henrik Lundqvist is healthy again, expected to start two of three games against the Kings, Ducks and Sharks after missing seven straight with a hip issue; while defensemen Dan Girardi and Kevin Klein are also both expected to return during the trip from extended absences.

But before this year’s trip officially gets underway, let’s take a look back at the first three California road trips under Vigneault’s watch.

In 2014-15, when the Rangers won the President’s Trophy, the club established a franchise record by winning 28 games on the road.

Three of those victories came in California when the Rangers swept their west-coast trip, outscoring the Ducks, Kings and Sharks 11-5 in early January.

Derick Brassard, Rick Nash, Mats Zuccarello, and Dominic Moore scored the goals, Lundqvist stopped 24 of 25 shots, and the Rangers never trailed en-route to a 4-1 victory over the Ducks.

In their first visit to the Staples Center since Alec Martinez’s double overtime goal ended their season in the Stanley Cup Final six months earlier, the Rangers rallied from an early 2-0 deficit to defeat the Kings, 4-3. Dan Boyle and Martin St. Louis scored power play goals for New York, and Kevin Klein and Lee Stempniak scored 19 seconds apart early in the second period. Cam Talbot brushed off a tough start to the game –allowing two goals in the opening 5:49 of play — to finish with 28 saves.

For the first time in franchise history, the Rangers beat all three California teams on the road in the same season, finishing off the road trip with a 3-1 win over the Sharks. Chris Kreider scored a goal and picked up an assist, while St. Louis and Nash also scored for the Rangers. Lundqvist sparkled in stopping 30 of 31 shots.

Well, it wasn’t really so bad, but the Rangers went 1-1-1 last season on their California road trip March 16-19.

Perhaps what made this particular trip feel so bad, is that it started out well with a victory, segued into a difficult overtime loss, and ended with a poor performance and a resounding defeat.

As he surprisingly did several times last season, Klein played the role of hero in the Rangers 2-1 victory over the Ducks. Klein scored early in the second period to tie this contest, and then netted the game-winner with 6:41 remaining in regulation, for the first two-goal game of his career. Antti Raanta made 22 saves to get the trip started on the right foot.

What is it about the Rangers playing in overtime at the Staples Center?!

The Rangers let a two-goal lead in the third period slip away before dropping a 4-3 decision to the Kings. Anze Kopitar netted the tying goal late in regulation, and then scored the game-winning goal against Lundqvist at 1:34 of overtime. Lundqvist made 33 saves in defeat; and J.T. Miller, Boyle and Klein all scored for New York.

Pretty much one player showed up for this Saturday afternoon matinée at the Shark Tank, and that was Henrik Lundqvist, who was left hung out to dry all day by his teammates, as the Rangers ended the trip with a 4-1 loss to the Sharks.

Vigneault’s first trek to California with the Rangers came early in his tenure as coach, Oct. 7-10, 2013, part of an extended nine-game road trip to start the season with renovations completing back home at Madison Square Garden.

After opening the season with a 4-1 loss in Phoenix to the Coyotes, the Rangers ventured further out west to face the Kings, Sharks and Ducks.

What started out well, ended with two of the worst losses in Vigneault’s stellar run as Rangers head coach.

Vigneault earned his first win with his new club, a 3-1 victory over the Kings. Brad Richards scored twice, Nash contributed a pair of assists, and Ryan McDonagh netted a shorthanded goal early in the third period to give New York breathing room after L.A. had cut the Rangers lead to 2-1.

It was a feel-good night at Lundqvist made 28 saves, and team captain Ryan Callahan made his season debut, coming back from off-season shoulder surgery.

Not sure what the schedule maker thought here, but instead of busing 45 minutes to Anaheim to play the next night, the Rangers instead flew up north to San Jose, and the result could not have been worse.

Of course, the illogical travel had little to do with the Rangers being absolutely embarrassed by the Sharks, 9-2. Lundqvist lasted less than half the game, allowing four goals, and Martin Biron surrendered five, including Tomas Hertl’s memorable between-the-legs goal, his fourth tally of the night.

The Rangers actually scored first in this game, an early goal by Richards, but the Sharks reeled off six straight before Derek Dorsett netted New York’s second goal midway through the third period.

After the contest, the doors to the team’s dressing room closed to reporters. The voice of Rangers President/General Manager Glen Sather was heard clearly as he tore into the players. All this just three games into Vigneault’s debut season behind the Rangers bench.

Seeking redemption just two nights later in Anaheim, the Rangers instead laid an egg with a second consecutive embarrassing loss, this one a 6-0 shutout at the hands of the Ducks.

The game was over in the first period as the Ducks steamrolled New York, en-route to a quick 3-0 lead. Three more goals in the second period provided the knockout punch before Anaheim called off the dogs in the last 20 minutes.

Who would have thought after getting bombed by an aggregate 15-2 score in back to back games out west that the Rangers would play in the Stanley Cup Final in California just eight months later?