Coaching in the regular season is all about discipline. Instilling the right habits and motivating players through the 82-game grind.

Coaching in the playoffs is all about tactics. Motivation isn’t a factor — if a team needs nudged to skate hard, then that group won’t be long for the playoffs anyway.

Playoff hockey serves as a chess match for NHL head coaches. Each team enters a series with a specific gameplan in mind, but changes need to be made effectively from game to game.  And even between periods.

Last week, we looked at a few of the issues Penguins defensemen were having on the breakout late in the season.

See Related: Breaking Down the Breakout

At the root of those problems was a predictable strategy and poor execution. Both themes continued through most of Game 1 of the first round as the Rangers repeatedly pinned the Penguins in their own zone.

Game 2 was a different story.  Pittsburgh exited the zone with ease more often than not.

The Rangers try to create outnumbered situations. If the puck is on one side of the ice, they’ll position four (and sometimes five) players on that same side, hoping to create pressure and turnovers.

Heading into Game 2, the only hope I saw for Johnston and the Penguins was to stretch the ice — a strategy that flies directly in the face of Johnston’s puck support mantra. But relying on quick, 8-foot passes between players on the breakout, as Johnston’s strategy dictates, was playing right into the Rangers’ hands.

The easiest way to stretch the ice is to keep wingers as wide as possible on the breakout. New York can’t afford to place five players on one half of the ice if a winger is lurking on the other side. All it would take is a well-placed flip of the puck to spring that Penguins player for a breakaway.

Let’s also take a closer took at the Penguins’ current group of defensemen.  Five out of six shoot left-handed.  What does this mean?

Most of the Pittsburgh breakouts have been going up the left-hand side of the ice, as the pass to a left winger is much easier for a left-handed defenseman to make on his strong side.  (This is something the Rangers should be keying on in Game 3, by the way…)

Because these examples involve breakouts up the left side, our focus should be on the right wingers.  They rarely receive the puck, but their presence has a huge impact on the Penguins’ ability to break out efficiently.

Here’s one example where Steve Downie (#23) sprinting up the right side pushes the Rangers defenders back into the neutral zone. Center Brandon Sutter (#16) ultimately receives the breakout pass and dumps the puck at the end of the shift, but he had plenty of room to exit his own zone uncontested:

Another tactic the Penguins used to create more space for their own defensemen in Game 2 involved positioning the left winger further up the boards when waiting for a breakout pass.

In the following screenshot, left winger Patric Hornqvist (yellow box) is up near the blueline, forcing the Rangers into a tough coverage decision.

If the Rangers defenseman holds the blue line and covers Hornqvist (as he’s doing on this play), Hornqvist can tap a quick pass back to center Sidney Crosby flying through the middle with speed:

Crosby and Malkin receiving the puck at full speed against flat-footed defensemen is exactly what Johnston wants from his ideal breakout.

You might’ve also noticed there are only four Rangers are in this picture. One defenseman is actually far off the screen to the right.

Why would he be there?

You guessed it…in anticipation of Chris Kunitz flying full speed up the right wing at the bottom of the picture.

The Rangers have stretched the ice on their breakout the entire season. Coach Alain Vigneault knows he has a speed advantage against most teams and that cross-ice stretch passes — as we outlined above — will put opponents back on their heels.

In Vigneault’s ideal breakout, defensemen would have plenty of time to skate up the ice, survey the coverage, and then hit speedy forwards like Chris Kreider, Martin St. Louis, or Carl Hagelin with a clean stretch pass through a seam.

Remember this play at the start of Game 1?

The Rangers had clean breakouts and dictated play for the first half of Game 1. Pittsburgh responded with a very aggressive forecheck — oftentimes too aggressive — in an attempt to limit the time and space New York had to execute a clean breakout.

The results have been inconsistent.

Derek Stepan’s first period goal gave the Rangers a 1-0 lead in Game 2 and was prepared according to the Vigneault recipe.

Plenty of space, quick passes, use speed as an advantage, and hit the wide-open forward across the ice with a pass before Pittsburgh knows what hit them:

NBC had a great overhead view of the goal later in the game that allows us to really breakdown the play.  Before you read any further, watch the play a few times and try to figure out where things went wrong:

The Penguins are in the midst of a forward line change, which allows the Rangers to regroup in the neutral zone and move the puck back up ice uncontested.

Defenseman Ryan McDonaugh (yellow circle below) has an easy pass outlet to his winger on the right side of the screen but decides to skate up to the red line instead. After gaining the red line, McDonaugh is then free to dump the puck without the risk of an icing call.

Ian Cole’s job (red circle #28) is to pressure the winger, JT Miller, along the boards. He doesn’t need to cut off the pass, but he needs to be able to collapse on Miller quickly if that’s where the play goes. Cole is in perfect position and has forwards coming across the ice for support.

No one on the ice notices Derek Stepan though (green circle). Stepan kickstarted the regroup with a pass to McDonaugh and then times the play so he has a full head of steam going into the zone. If McDonaugh dumps, he’ll be the first one to the puck.

But McDonaugh doesn’t dump it.

He makes the pass to Miller, who suddenly has room to gain the blueline and survey the scene.  What happened to Ian Cole? 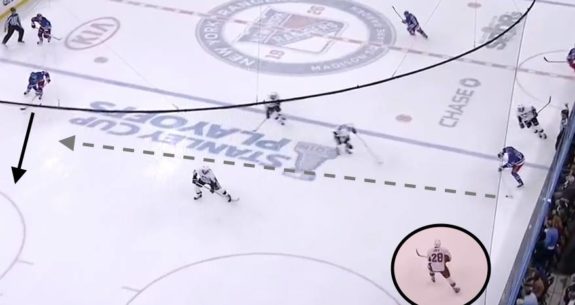 Cole inexplicably backed off to the top of the circle.  Perhaps he was cheating on the dump or afraid of the Rangers’ speed, but in the screenshot above he’s a total non-factor in the play.

Ian Cole was a bright spot for the Penguins after coming over from St. Louis at the trade deadline. He thrived in a bigger role during the final weeks of the regular season following the injuries to Kris Letang and Christian Ehrhoff.  Games 1 and 2 weren’t his best performances though.

Giveaways, doubting his skills, getting turned inside out by Rangers forwards, and coverage issues like the example above.

Maybe he needs a better defensive partner than Rob Scuderi to ease the pressure, as Twitter user @LafayetteRicks pointed out. Or maybe he’s also struggling to contain the speed of the Rangers’ forwards.

We tend to talk about intimidating teams from the perspective of heavy hitting, but speed can be just as intimidating at the NHL level.  The good thing for Cole is he has the skills to bounce back quickly.