The Chicago Blackhawks and Minnesota Wild took to the ice Sunday night to compete for first place in the Central Division. Both teams entered the night tied with 59 points apiece, but only one was able to leave atop the division. For the Blackhawks, this win was important because of Minnesota’s four games-in-hand. Meanwhile, the Wild were looking to capitalize on the fact that they had so many games left to play over the Blackhawks by coming out ahead in their first matchup of the season. 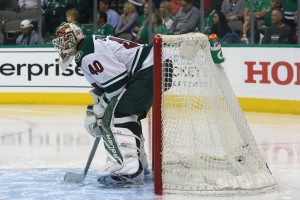 After winning four consecutive games at home, the Blackhawks finally dropped one in arguably their most important home game of the season. The Wild took over sole possession of first place in the division with 61 points and maintained their four games-in-hand over the Blackhawks. For Minnesota, this game was huge in showing both the Blackhawks and the rest of the league that they are legitimate contenders this season.

The story going into the game was how solid both goaltenders were. Dubnyk stifled the Blackhawks to the tune of just two goals on 35 shots. Crawford was solid in his own right, but at the end of the night, he was beaten three times on 32 shots to give the Wild the win.

The Blackhawks came out strong in the first period against the Wild on Sunday. After being dominated by the Washington Capitals on Friday to the tune of a 6-0 loss, the Blackhawks outshot the Wild 14-8 in the opening frame of this game. Patrick Kane started the scoring for the game by firing his 13th goal of the season past Wild goaltender Devan Dubnyk.

.@88PKane opens the scoring with his 13th goal of the season! It's 1-0 Chicago! #CHIvsMIN pic.twitter.com/czxE4OqSpT

After scoring the first goal of the game at the 4:33 mark of the first period, Kane scored again at the 4:16 mark of the second period to give the Blackhawks the 2-0 lead. Artem Anisimov recorded his second assist of the game.

One of the more unusual goals @88Pkane has scored against the Wild pic.twitter.com/h6vTk7vpJe

With Anisimov in the penalty box for a trip, the Wild were able to convert for their first goal of the evening. Nino Niederreiter scored his 12th goal of the season with both Mikael Granlund and Jonas Brodin earning assists on the play as well.

The Wild convert on the power play to cut the #Blackhawks' lead to 2-1. #CHIvsMIN

Just over five minutes later at the 11:00 mark of the period, Chris Stewart scored his ninth goal of the season to tie the game for the Wild. Jordan Schroeder and Ryan Suter were credited with assists on the goal. Just past the halfway point of the game, the game was essentially restarted with the Wild tying the game.

With 14:52 remaining in the game, the Wild took their first lead of the night courtesy of Jason Pominville scoring his sixth goal of the season from Marco Scandella. Dubnyk stood tall for the remainder of the game, keeping the Blackhawks at bay, even with the Blackhawks pulling Crawford for the extra firepower late in the game. He backstopped his team to their 28th victory of the season and sole possession of first place in the Central Division.