Coming into the 2016-17 season, the Detroit Red Wings were hoping defenseman Brendan Smith would take a step forward and emerge as a well-rounded, top-four defenseman. Now at the quarter point of the season, Detroit has eight healthy blueliners on the roster and Smith is one of the two watching from the press box.

With Smith, the Red Wings are in a bit of a conundrum. They spent their 2007 first-round pick on the St. Michael’s (OPJHL) defenseman, passing over the likes of P.K. Subban, Wayne Simmonds, and Alex Killorn. Nine years later, Smith still has not reached the potential that the Red Wings saw in him and is scheduled to become an unrestricted free agent at season’s end.

What should the Red Wings do with Brendan Smith?

Considering the Red Wings’ lack of offensive firepower, there is opportunity for Detroit to build Smith’s value over the course of the season. The team has scored a paltry 2.3 goals per game—ranking 24th in the NHL—so far this year, and have barely managed any offensive productive from their defensemen, save Mike Green and Ryan Sproul.

Detroit could give Smith more offensive zone starts alongside Green or Sproul – he has the tools to thrive in the offensive zone as long as the Red Wings maintain possession. Additionally, Smith has the skill set necessary to contribute to a quick-strike offensive attack if the Red Wings decide to speed up their deliberate game. He’s also comfortable moving in down low on the power play:

By building Smith’s value, the Red Wings could position themselves to deal Smith around the trade deadline. If they know the Mimico-born defenseman won’t be around next season (because of expected salary or position on the depth chart), why not trade him for a draft pick or a rental player to remedy another team deficiency down the stretch?

And, of course, if Smith succeeds, then he may be worth signing to a new contract. His potential is enticing, but unfortunately, is still only potential unless he consistently proves otherwise. Furthermore, if Las Vegas selects a defenseman from the Red Wings during the expansion draft, Detroit may be glad they re-signed Smith to fill the void. 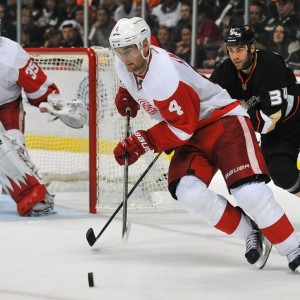 Alternatively, the Red Wings could continue to sit Smith knowing that he’s not in the cards for next season and beyond. It’s tough to give up on a former first-round pick, but, like Jakub Kindl, something needs to be done if the pick simply does not pan out.

Given Smith’s abilities and best-case production potential, the defenseman could earn a $4 million-per-season contract on the open market. He could easily score 30-plus points playing with the right partner and in the right system. Smith is already making $2.75 million now and will likely be asking for a raise when he hits unrestricted free agency for the first time – something that the Red Wings cannot afford with their current payroll structure.

If the Red Wings minimize Smith’s playing time, they’ll have the opportunity to dress Sproul and Xavier Ouellet more often – two players with smaller cap hits and who are under team control for years to come. Detroit should continually work to develop its prospects if the team isn’t winning anyway.

With three-quarters of the season still to go, the Red Wings should do everything they can to improve as a team. Part of that is getting Smith on the right track – an offensive defenseman with speed and willingness to jump up in the play is a hot commodity. With Smith in the lineup and playing to his potential, the Red Wings are a better team.

But when deciding on Smith’s long-term future with the organization, there’s one question to consider: is the defenseman worth $4 million to the Red Wings over four-plus years, given their current financial commitments? No. Not unless other moves are made to shed salary. And with Brent Burns, Kevin Shattenkirk, and Karl Alzner slated to hit the market, there are better ways for the Red Wings to address their needs on defense.

Should the Red Wings sign Brendan Smith to a long-term contract or look to trade him? Comment below with your thoughts.