In January, I sat down with former President and owner of the Montreal Canadiens, David Molson and his wife Claire Molson, to discuss the Habs’ Golden Years and what they feel is the biggest difference between the Canadiens then, when it was unacceptable if Les Glorieux didn’t win the Cup, and now, when just making the playoffs has become a struggle.

Mr. Molson became President of the Canadian Arena Company and by extension the Club de Hockey Canadiens in 1964 at the young age of 35.  He stayed at the head of the organization for seven seasons, winning the Cup five times.

He is over 80 now, but still speaks with the poise of a distinguished businessman and the pride of, albeit former, ownership of hockey’s most winningest team.  Admittedly, his interest waned in the sport when he sold the Canadiens in 1971, after a glorious game 7 Cup win against the Chicago Blackhawks, but it’s hard to believe given his strong opinions about the state of the NHL and the joy with which he remembers his days as a member of the Montreal Canadiens.

For generations the name Molson has been synonymous with the Montreal Canadiens, even in their absence.  Senator Hartland

Molson was the first Molson to take over the organization in 1957.  During his time as President, a young David was working his way up the family business.  However, David Molson’s love of the sport led him to spend considerable time, amidst his other duties, learning the business of hockey and accompanying the team on the road when he had time.

When Senator Molson decided to step down, it was only natural that he would pass the torch to David and his brothers William and Peter.  David became President because he was a savvy businessman, an avid hockey fan and because the Canadiens were looking to insert some youth into the organization that had not won the Cup in four years.

Still, Mr. Molson had enough respect for the sport, and the organization, to surround himself with the right people.  “We’ve got a very workable situation here.  Our General Manager, Sam Pollock, and of course, Toe Blake are experts in the hockey field.  They have autonomy in their areas,” he told Gerald Taaffe of The Montrealer back in March of 1965.

Sam Pollock spent 14 years as the Canadiens General Manager and won 9 Stanley Cups; Hector “Toe” Blake coached the Habs for 13 seasons and his 8 Cup victories rank second on the all-time coaching list.  Rounding out the management team was the legendary Maurice Richard  as Assistant to the President.

It was a dream management team dedicated as much to winning as to honouring the CH, and to developing the NHL into a dominant sports league.

Habs: Then vs. Now

We sat in the Molson’s living room on a snowy Saturday afternoon, the sunshine beaming through the large windows. The Australian Open was on the tv and a scrapbook lay open in front of me with pages of memories captured on film; The Molsons at the opening Gala of the new Forum, his first achievement as President. It was a black tie, invitation-only affair that included a who’s-who of Canadian politics and celebrities; Mr. Molson handing out NHL awards to Gordie Howe and Stan Mikita; countless Cup victory photos and news clippings. Beside us, the wall-length library shelved a number of physical volumes of hockey history from which Mrs. Molson would reference names and dates.

Here were the Habs’ Golden Years.  Since the 80s the Habs have won the Cup only two times.  When I asked Mr. Molson why he thought it had been so long since the Montreal Canadiens had won hockey’s most coveted prize, he didn’t defer to mistakes.  He focused on the natural progression of the game.

“Like any sport today golf or tennis, 20 years ago you would always see the same champions,” he explained, his palms open and his fingers spread out like a teacher or a coach.  “Today, more players achieve a world-class standard and therefore there are more champions.  The Habs haven’t won a Cup in 20 years because competition has grown and training has improved.  It’s not just a winter sport anymore.  My grandchildren play hockey in the summer now! It’s become the natural course for sports over time.”

At the time of his ownership, Mr. Molson believed that the NHL had reached a point where, in order to survive, it needed to expand from six teams.  It was Mr. Molson and Sam Pollock who brought the viability of the idea to the other five NHL owners and spear-headed the first NHL expansion to twelve teams in 1967.  It was the owners who discussed an ultimately awarded the cities of St. Louis, Philadelphia, Minnesota, Pittsburgh, Los Angeles and Oakland NHL franchises.

This, however, is where Mr. Molson feels expansion should have ended.  “I personally feel that the NHL is over-expanded today, to put it that way,” he said.  “30 teams is too many considering there are probably 20 teams that are genuine competitors.  When you think of the places like Nashville or Florida, there is nothing natural about having our national sport there.

“Today there are 7,000-8,000 people in the stands in some arenas,” he continued. “Whereas the original teams are still at a level where they started.”  Of course, he acknowledged that some teams are doing well, but had he stayed in the league he would have pushed for a Champions League type of tournament where the NHL Cup winner would play the top European teams in a World Championship, rather than adding more NHL clubs.  Instead, since his absence, the NHL has continued to grow into a league of 30 teams and tournaments like the World Cup have fallen by the wayside, to the detriment of the character and spirit of the sport. 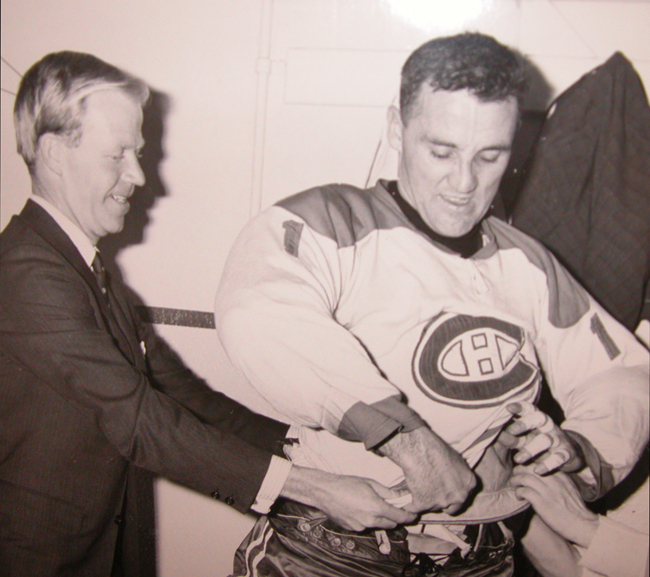 With 30 teams it’s almost impossible to hold onto a winning lineup.  Today, teams like the Chicago Blackhawks and Detroit Red Wings have managed it with some success but in the 60s and 70s teams stayed together for years.  “Team chemistry was so important then,” said Mr. Molson.  After some reflection he added, “Now the chemistry is diluted.”

It’s diluted, not simply because talent is spread thin among the many teams, unlike the concentrated talent of yore, but also because modernity has brought about more efficient travel where teams spend less and less time together. For instance, a two hour flight is considerably different from a two day train ride where players and coaches had that much more time to bond.  Sure, today fans have access to HBO’s 24/7 where they can see a group of players enjoying dinner together on the road, but it’s nothing like being stuck in the same moving quarters for 24 hours.

The Molsons remember spending two days on the train as they chugged toward Chicago for a playoff game.  The owner’s car was set apart from the players but Mr. Molson remembers the strong whiff of cigar smoke as he entered the passage to the players’ car.  He remembers approaching Toe Blake’s car only to find him playing cards with some of his players, players like Jean Beliveau.  “There was a family like feeling that teams don’t have anymore,” he admits.

That family feeling was a tradition upheld by the Molsons, who considered hockey a sporting venture first and foremost. According to Jacques Beauchamp, of the now defunct Montreal-Matin, in his day Mr. Molson was admired by the team: “The players respect his judgement,” said Beauchamp in 1965 of the Canadiens’ new owner and President. “And he knows how the players feel when things get rough…He never loses his head.”

Mr. Molson’s ability to relate to his players was likely due to his young age as well as his understanding of the game from a players’ perspective.  He was a talented player in his own right, who played on some of the leading amateur teams in Quebec, with and against players like Dickie Moore and Gump Worsley.  At one point in his playing days, he was on no less than five starting line-ups on five hockey teams.  After a year of studying abroad at the University of Brussels, he was the star players on the Belgian National team.

Though Mr. Molson might have been a unique owner of hockey’s most storied team,  Toe Blake carried forward that family tradition through his relationship to his players.  One of Mr. Molson’s favourite memories of Blake highlighted his caring nature toward his team:

“It was before the playoffs when the players would go up north for a couple of days to focus and be reminded to think as a team and the job ahead.  There was some dissension between the French and English players on the team that year.”  Though he doesn’t remember what the division was about, he remembers Blake easing the tension by sending cards to each of his players.  “He sent French cards to the English players that read ‘Ne lacher pas’ and English cards to the French players that read ‘Don’t quit’,” Mr. Molson recounted, then added with a smile, “We won the Cup that year.”

The dipping sun reflected off the fresh snow and warmed the living room as the Molsons continued to welcome me into their memories.  They spoke in depth about Toe Blake; about their respect for him, his coaching and, of course, his notorious temper.  We also spoke about the introduction of the Players Union in 1967 , that ultimately changed the nature of the relationship between the players and management.

To read more about the Canadiens of the 70s please see  Molsons Carrying on the Montreal Canadiens Tradition.