Fans at Raleigh’s PNC Arena watched with excitement as the Sabres were speared by the Hurricanes, 5-1. It was a night of firsts for the team: the first preseason game wherein the roster looked very much like it will in the home opener; the first night back for former Hurricane, Chad LaRose; and the first preseason game with the goaltender having a full complement of NHL players in front of him.  The game went the Carolina’s way pretty much from the opening puck-drop, and everyone – players, coaches and fans went home feeling pretty good.

The home crowd buzzed with excitement when #59 was introduced.

Chad LaRose, after taking a year off to get himself mentally where he needs to be to play in the NHL, was back in a Hurricanes uniform.  When he hit the ice, the adrenalin rush was obvious.  3 1/2 minutes in LaRose, blasting toward the wall behind Buffalo goalie, Michal Neuvirth, forechecked Josh Gorges like a cruise missile. and made his presence felt in a massive way.  He was rewarded with a five-minute penalty for boarding and a 10 minute game misconduct, but the fans in attendance loved it – some even standing to applaud his return and his intensity. 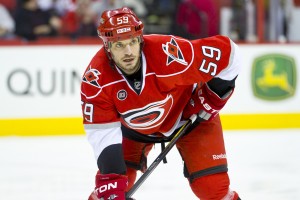 What is ironic about LaRose’s hit is that Gorges is the Sabre who got tangled up with Jordan Staal in the mishap that left Staal with a broken fibula.  I don’t think anyone attributed LaRose’s hit to any type of “payback,” as the Gorges/Staal incident was just an unfortunate accident.  No one thinks that Gorges did anything malicious.  And no one thinks LaRose plowed into him intentionally.  But, the point was made – perhaps unintentionally – that LaRose is the guy on Carolina’s team that will play hard and hit hard, a combination that was missing last year for the ‘Canes. We will likely see Chad on the ice in Washington Sunday afternoon, as the ‘Canes take on the Capitals in their final preseason game.  After all, he was slated to play around 14 minutes and only got a little over a minute of ice-time as a result of the misconduct penalty.

Sabres first speared by the Hurricanes at 18:28

Nathan Gerbe scored a fabulous goal at 18:28 in the first period.  He received a perfect pass from Alexander Semin and drilled it home. It was Gerbe’s second goal of the preseason and his 5th point.  I cannot find enough superlative adjectives for the 27-year old for Sabre.  I noticed last year that – even when others seemed to be lacking enthusiasm – Gerbe was everywhere.  He consistently displays the textbook definition of “hustle,” skating hard, checking, and working both ends of the ice with passion.
Last night was no exception, as Gerbe exhibited his normal aggressiveness and proximity to the puck and was rewarded with a very nice goal.

He scored a power play goal off an assist from Andrej Sekera and Victor Rask at 3:46 in the 2nd period.   Once again, the Hurricanes demonstrated some very crisp passing and good work on the power play.  Even though it is the preseason, the ‘Canes have definitely improved their power play, changing from last year’s confused, aimless, seldom shooting lack of cohesion, to a purposeful, aggressive routine that looks to be a force to be dealt with this season.  If they can keep it going and continue to improve, it could be the difference in this team making the playoffs or staying home.

Jeff Skinner scored his second goal of the preseason on an assist from Nathan Gerbe.  At 4:45 in the second “Skins” found the net and the Sabres were beginning to realize they were definitely being speared by the Hurricanes in this contest.

Elias Lindholm looked magical receiving a pass from Ron Hainsey, sliding with ease to Neurvirth’s left and lifting it on a rope to its home in the net. It was a fabulous goal, illustrating the grace and skill that seems to just flow naturally from the 19-year old Swede.  This guy is a keeper, and will continue to impress for years to come in the NHL.

He looked outstanding. He made several excellent saves and seemed to be extremely confident.  After the game, “Wardo” said he “felt real good in St. Louis and wanted to carry it over into tonight.”  He credited his teammates for “playing real well in front of me.”  This was the outing Ward needed to show himself as a serious contender for the job that for years was his.  He played well with an NHL-level roster around him, looking healthy and mentally ready.

The lone goal Cam gave up was to Buffalo’s Jake McCabe.  He scored on a power play goal at 15:48 off an assist from Mikhail Grigorenko.  Ward had come out several feet in front of the net and – through a maze of players – McCabe lofted one by him stick side.  On the night Ward saw 20 shots and stopped 19 – most of them coming in the 1st period.  Cam said afterwards that the lack of action “quickly changed to a mental game, where you try to stay involved and stay sharp mentally.”

A hat trick for Lindholm!

At 16:04 in the third period, Elias  Lindholm got his first NHL hat trick on an empty net goal. It was a great moment, but sadly not as celebrated as one would have hoped for such a milestone.  Testifying to the fact that it was a sparse preseason crowd and late in the game, 1 or 2 hats flew ceremoniously onto the ice. The ability to score that Lindholm has demonstrated so far in his young career portends that this will definitely not be his last.

As mentioned, Sunday the Hurricanes will play their final preseason game in Washington.   Anton Khudobin will be in the net.  Chad LaRose will try to get a longer look from on the ice.  Victor Rask, who got another assist last night, will try to cement his spot on this team.  The season is almost here, and at 2-4 in the preseason so far, the ‘Canes seem to be putting the pieces together at the right time.  They seem to be buying into Coach Bill Peters’ system, and responding to Rod Brind’Amour’s power play coaching.

After being speared by the Hurricanes, Buffalo will now look to October 9th and their regular season opener at home versus Columbus.  They’ll be back in the PNC Arena for real this time on Tuesday, October 14th.  Here’s hoping for a similar result.