It’s common knowledge that great goaltending can win a series. Sometimes all it takes is a goalie to stand on his head, a la Jaroslav Halak in the 2010 playoffs, and sometimes it’s a team effort where the defense forms an airtight seal around the net. Martin Jones hasn’t been exceptionally sharp all season long and the playoffs haven’t been much different, although he isn’t getting much help.

The San Jose Sharks dispatched the Anaheim Ducks in the first round due to a mismatch in speed, but there is no such advantage against the Vegas Golden Knights. Both teams are equally matched in many regards, although the Knights got off to a much better start in Game 1. One of the things that struck me was how the Sharks were powerless to stop Reilly Smith and William Karlsson from creating scoring chances from the slot and below, otherwise known as the high danger area.

Even though the series is heading to California in a 1-1 tie, this inability to protect the high danger areas could prove fatal if the Sharks do nothing to address it.

The first two games of the series saw two versions of each team. One dominant and one that looked a bit shell-shocked. I think it’s pretty clear which version of each team was on display in Game 1, but Game 2 was a different story. The Sharks’ defensive presence was less than average despite winning the game. All in all, the Sharks have given up 22 high danger chances at even strength so far this series. Below is a breakdown by game. 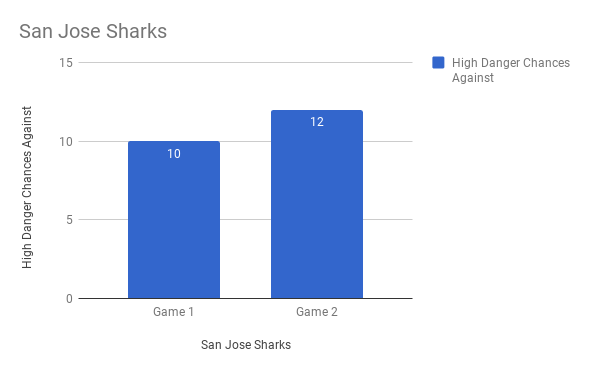 Vegas is still winning the overall high danger battle, but the Sharks fought back valiantly in Game 2. Still though, the Sharks have a stellar defense that is regularly getting beat by a team whose star is arguably James Neal or Jonathan Marchessault. No offense to those two, but they’re not exactly household names. Usually, stars are needed to go deep in the playoffs, but the Knights are doing it through an attack by committee and spectacular coaching.

The Sharks should be better, so let’s see who are the worst offenders, or in this instance, the worst defenders.

In Defense of Jones

The defense is a split in terms of high danger chances. Three have positive differentials while three have negative differentials, although it’s not that simple. The guys who are supposed to be producing on the offensive side aren’t really doing so, meanwhile the “defensively orientated” ones are consistently leaving Jones out to dry. Below are the three worst, mostly because I want to save the positives for last. 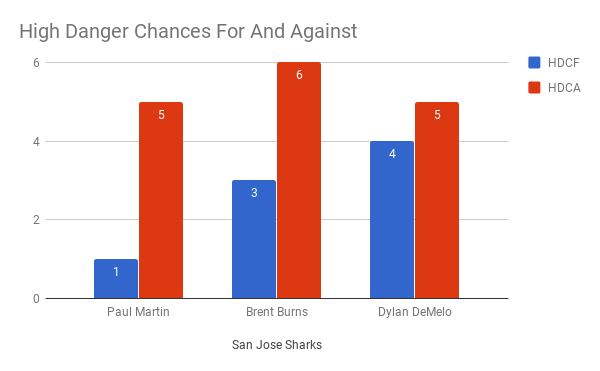 Dylan DeMelo being as close as he is might not actually be a bad thing. I’m of the mind that he’s not good and barely passes as average, so it’s nice to see him and Brendan Dillion not be taken advantage of by the Golden Knights’ depth. Otherwise, the Sharks top pairing is an eyesore despite Brent Burns scoring two goals in Game 2.

The pair has been atrocious in their own zone and done little to combat offensive off the rush. This is mostly due to the fact that Paul Martin is too slow to play in the NHL. His instincts and positioning are sound but his inability to play at a fast pace leaves him susceptible to faster opposition. The Knights have already breezed by him to the outside three times by my count, and they’re continuing to do so in the offensive zone. It doesn’t help that Burns is more of a rover than defenseman and can get caught too low in the offensive zone.

I don’t expect Burns to change his style, so he’ll need a new partner to help make up for his defensive shortcomings. While Martin was the perfect partner over the past two seasons, a new partner is needed. I swear it’s not all doom and gloom though, as the rest of the defense is a net positive. 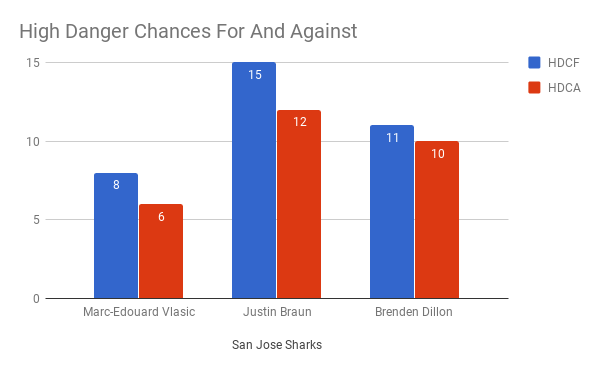 Going into this series, I fully expected Marc-Edouard Vlasic and Justin Braun to be positive high danger chance players, but Brenden Dillon is a nice surprise. What’s worrying is Braun and Dillon’s chances against are so high, as the two are typically the second and third best defensive defenders on the team. My excuse would be that Vlasic was double shifted and lines were shifted which caused some communication issues. But it’s still borderline unacceptable that the duo has given up so much while Vlasic has only given up on average three a game.

The Sharks need more from all of their defensemen if they expect to make it to the Stanley Cup Final, or even past the second round.

Give Jones a Break

There are a few changes that need to be made, of course, although I’m not sure how much the defense needs to adjust. Having the wings collapse a bit deeper into the zone while the Knights have possession might leave the points exposed, but will cut down the chances and passes to the slot. It’s a sacrifice that the Sharks should be willing to make as Jones has proven himself able to stop the easy shots from outside the dangerous areas.

I fully expect the Sharks to make a few adjustments over the coming days but the biggest difference might come from the change of scenery. Home ice advantage means that the Sharks will control last change and get to deploy the matchups they prefer. I would expect to see Vlasic and Braun to tackle the Marchessault line while Burns and his partner get to eat easier minutes against less-skilled competition. I think the re-addition of Evander Kane will be a big boost on offense as well, although I wonder how his defense will factor into the all-around situation.

One thing is for certain, the Sharks need to be better in their own zone. The Knights are too fast in transition and too good at offensive zone puck possession to be allowed the slot. It’s been open season on Jones for the past two games, but luckily for the Sharks, he’s risen to the challenge.