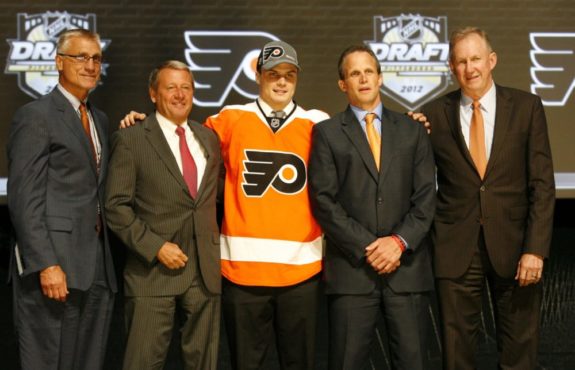 At the 2012 NHL Entry Draft in Pittsburgh, the Philadelphia Flyers were the twentieth team to take the stage at the Consol Energy Center. The Flyers, a team which historically has drafted well under Paul Holmgren, selected Scott Laughton from the Oshawa Generals of the Ontario Hockey League.

Like Sean Couturier, the Flyers’ first-round selection in 2011, Laughton is not a flashy player. He is a two-way forward whose primary skills are on the defensive side of the game. A scouting report projects that Laughton “should be an effective third-line player with some potential for second-line duty.”

At the conclusion of the third lockout under Gary Bettman, Scott Laughton signed a three-year, entry-level contract with the Flyers. With his goal being to remain in Philadelphia, the rookie reported to training camp. There, he impressed the organization with his leadership and efficacious style of play. Having opened some eyes, Laughton earned a spot on the Flyers’ roster. 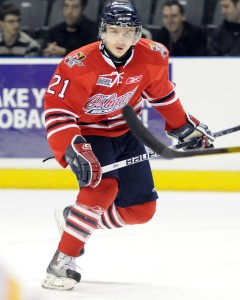 Scott Laughton made his National Hockey League debut in front of a hometown crowd, one that had been deprived of hockey for over seven months. Following that loss to the Pittsburgh Penguins, Laughton would play just four more games with the Flyers. The club made the decision to return the 19-year old center to his junior team before his entry-level contract would kick in.

Head coach Peter Laviolette said that Laughton “didn’t look out of place” in his short stint with the Flyers. He was correct.

Despite the fact that he was held scoreless, Laughton held his own in his five-game trial. The two-way, power forward registered ten shots on net and ten hits. He averaged over eleven and a half minutes of ice time and about fifteen shifts each game. Laughton won 43-percent of his face-offs and had an even rating over the course of those five games.

Following his return to the Oshawa Generals, Scott Laughton scored 23 goals and added 33 assists in 49 games. He led his team to the playoffs, in which his performance was very impressive. Laughton totaled thirteen points in his team’s seven-game playoff run.

At the conclusion of the season, Flyers general manager Paul Holmgren seemed quite optimistic about Scott Laughton’s future. He believes that Laughton will be ready to compete for a full-time roster spot. “That wouldn’t surprise me,” Holmgren said. “He dominated at his level at times. And that’s encouraging.”

Is Scott Laughton ready to become a regular on the Flyers’ line-up for the 2013-14 season? Based on his strong play during his time in Philadelphia and his dominant performance in the Ontario Hockey League, the answer is yes.

Should the former first-round pick in 2012 make the team, as is expected, he will likely center the fourth line. Max Talbot, the usual center of that line, can be moved to the wing, and Adam Hall can be utilized as a depth player.

The Philadelphia Flyers have great organizational depth at the center position. Some believe that will hinder Laughton’s chances of staying with the team. However, based on his impressive performances both with the Flyers and the Generals, Laughton has proved that he is ready to stay in Philadelphia. A fourth-line role with the Flyers would be beneficial for his continued development.