The men in stripes for tonight’s Game 3 in Los Angeles will be Stephen Walkom and Eric Furlatt.  This dynamic duo has officiated six games together in the playoffs, averaging 6.8 penalties per game in those matches. Manning the bluelines will be Brad Kovachik and Shane Heyer.

Walkom is a veteran offical who also served as the league’s Head of Officiating from 2005-2009 before returning to the ice the following season.

The Kings are undefeated this season in game’s officiated by Walkom, posting a record of 4-0 in the regular season and 3-0 in the playoffs.  He was on ice for Games 3 and 6 against the Blues as well as for their Game 1 victory over the Sharks – all three of those wins taking place at the Staples Center, where the Kings are undefeated this postseason.

Amazingly, the Hawks have nearly matched that record, also going undefeated when Walkom’s on the ice. He oversaw their Game 4 victory over the Wild along with winning efforts over Detroit in Games 5 and 7 of the second round. They went 3-0 in the regular season in Walkom-run games.

Walkom was last seen in Game 7 of the Conference Semi-Finals series between the Blackhawks and Red Wings. It was in that game, tied late in the third, that his matching-minors call cost Chicago a goal and nearly cost them the series. 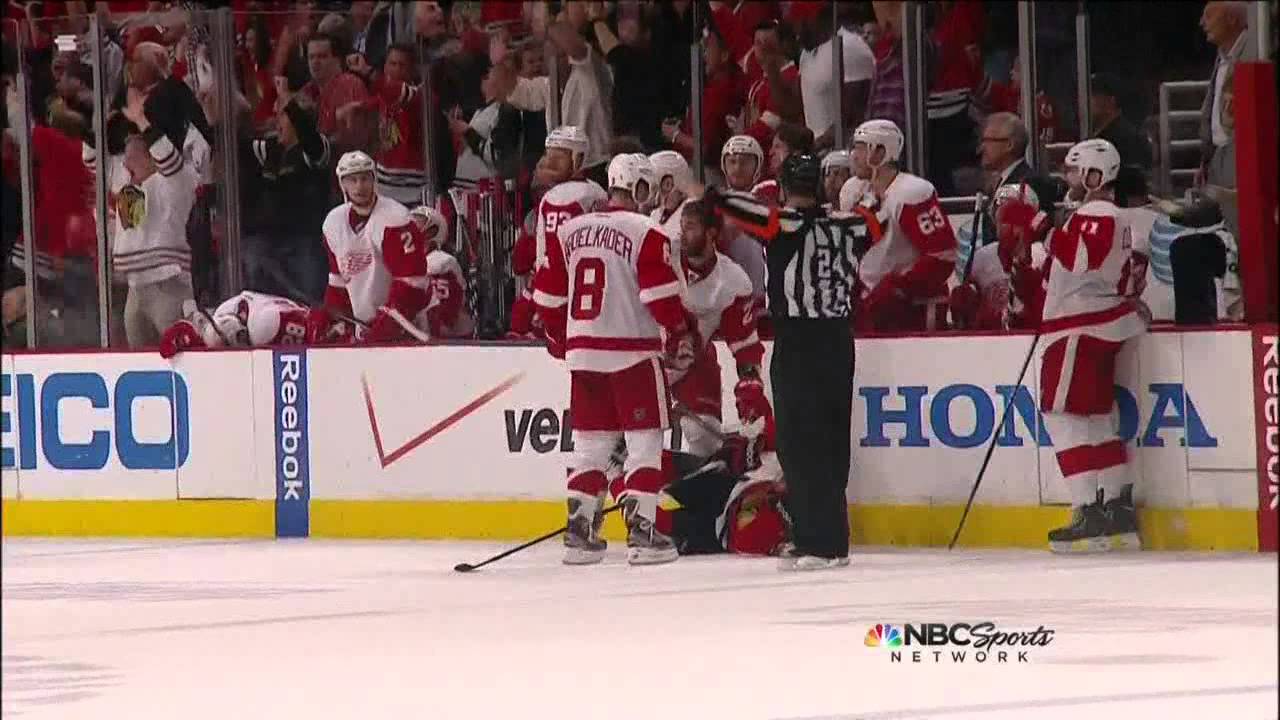 It was a bad call. Not so much the call itself, but the context of it.  Walkom likes the matching minors, as do many of the veteran officials.  They use them to try to keep order without affecting manpower on the ice and, arguably, impacting the outcome of the game.  In this case, Walkom’s call was unnecessary.  It was even a bit unbalanced, as Detroit’s Kyle Quincey seemed more deserving of a trip to the sin bin than Chicago’s Brandon Saad, with whom he was battling in front of the bench. The real unsettling part of this call, though, is that Walkom apparently had absolutely no idea what was going on at the far end of the ice.  At this level, that’s simply not acceptable.

The league released a statement supporting the call, saying that Walkom’s responsibility was with the action behind the play and that the lead referee, Dan O’Rourke, was responsible for the play in the Red Wings’ zone.  That’s fine, but Walkom wasn’t even aware of what was going on down there.  Had he even taken a moment to glance up ice, he’d have seen the potential scoring opportunity as the Hawks entered the zone. Seeing that, he certainly could have held off on blowing the play dead until the shot was stopped or the scoring play broken up.

Had Hjalmarsson missed the net, Walkom could’ve whistled for a stoppage and sent both players off without incident.  He didn’t.  He got too busy watching the battle and missed the war. His ‘intent to blow’ blew too soon. Thankfully, Brent Seabrook’s overtime winner got him off the hook, out of the guillotine, down from the gallows, pardoned from the firing squad, and back on dry land.

In hindsight it was kind of odd when I made that tweet about hoping for OT and during the next commercial break Stephen Walkom favorited it.

It's fun scouring Twitter to find who in hockey likes being Skip Bayless on the bad Walkom call, contradictory for the sake of contradictory

Obviously, the league was okay with the call. Brad Meier, an otherwise-solid official who had a decent postseason, has been relegated to a standby role for the Conference Finals. Tom Kowal, Chris Lee, and Kevin Pollock also saw their officiating postseasons come to an end after the second round of the playoffs.

Former Director of Officiating Stephen Walkom, though, moved on, bad calls and all.

Furlatt’s had some time off.  His last game was ten days ago, in Game 5 of the series between the Blackhawks and Red Wings.  Chicago rediscovered their power play to win that game 4-1 and start climbing out of the hole dug by their 3-1 series deficit.  (Furlatt’s partner tonight, Stephen Walkom, worked Game 7 of that series, paired with veteran Dan O’Rourke.  Don’t look at that move as an indictment of Furlatt; the NHL normally looks to pair its most tenured officials for the seventh game of a series.)

The Kings have only played in three games officiated by Furlatt – two in the playoffs and one in the regular season.  In those matches, Los Angeles posted a 2-1 record, their only loss coming in a regular season game against the Minnesota Wild.  The Blackhawks have seen much more of Furlatt, taking the ice six times with the Quebec native, going an even 3-3. Their lone Furlatt-officiated postseason game was the aforementioned Game 5 victory over Detroit.

Chicago’s power play should be a non-factor, as they’ve been powerless away from the United Center.  Their overall 16.3% conversion rate is misleading. The Hawks are much better at home (22.2%) than on the road (6.3%). They’ll be facing the second-best penalty killing squad at home, as the Kings have allowed only one goal in 19 attempts (94.7%).

On the other side of the special teams equation, the Kings have been clicking along around 20% with the man advantage both at home and on the road.  They’ve already broken through on Chicago’s stellar penalty kill (95.7%), scoring late in Game 2 when Kings forward  Tyler Toffoli found the net in the waning moments of what ended up as a 4-2 loss in Chicago.

The Kings will need to shut down the Hawks’ power play and ensure they fail to improve upon their terrible 6.3% road conversion rate.  Chicago managed to score just once with the man advantage outside of the Windy City, when Marian Hossa opened the scoring of Game 5 against the Red Wings with a power play marker. Los Angeles can’t let that happen. Thanks in part to their scoring struggles, the Kings have posted a 1-5 record in the postseason when allowing a power play goal.  Much like last year, there’s a very fine line between winning and losing for this club. One power play goal could tip the scales against them.

Playing 5-on-5, the Hawks are the superior team.  In the postseason, they’re second only to the Bruins in even-strength effectiveness, with a 1.40 ratio of goals scored vs. goals against.  In comparison, the Kings are nearly even at 1.09. Los Angeles will need to get something going on the power play if they hope to win.

While both teams are great shorthanded, you have to give a slight edge to the Kings’ based on their power play.  Will they get enough opportunities to make it count?  Furlatt and Walkom call fewer penalties than any other officials left in the playoffs.  There won’t be many calls to go around.  The Kings will need to take advantage of whatever comes their way. It won’t be much.

Expect there to be more frustration around the calls that are missed.  Walkom’s famous for missing calls… like this one: 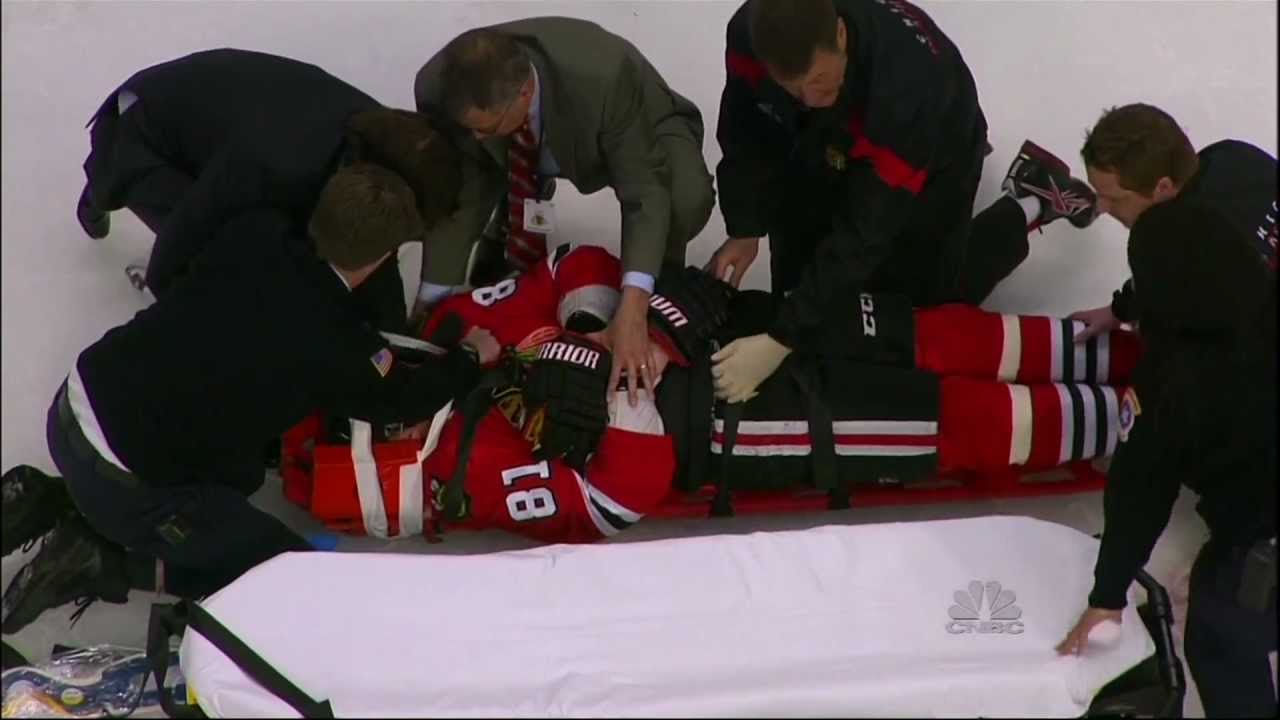