If the Panthers are molding a new identity with their future, not the past, then should the Florida Panthers make Erik Gudbranson captain for the 2014-15 season? Panthers GM Dale Tallon said it was likely to happen somewhere down the road. So what’s keeping Gudbranson from becoming the captain sooner rather than later?

Dale Tallon on Erik Gudbranson being an RFA: "He's not going anywhere. He is likely going to be the captain of our team some day."

A 3rd overall pick in 2010, Gudbranson was the first player Dale Tallon selected as a General Manager for the Florida Panthers. The selection made Erik the symbol of a new Panthers era, the first step in their new rebuild, and the face of things to come for hockey in South Florida. And to understand why Gudbranson was the perfect choice for the Panthers, we have to revisit an ugly incident earlier in the 2009/2010 season that changed everything.

The state of the Panthers was summed up the night ex-Philadelphia Flyers captain Mike Richards, landed a historically cheap head-shot on Panthers’ emerging star, David Booth. After Booth’s head was met by a flying elbow, he was wheeled off the ice on a stretcher with a severe concussion that has haunted him for years. On the other hand, Mike Richards walked off the ice after the game without having to face a single repercussion from any of Booth’s teammates for taking a run at him.

That night marked the Panthers as one of the softest teams in the league.

Dale Tallon must have figured the Panthers needed to begin their rebuild with a whole lot of power when he drafted Erik Gudbranson 3rd overall in the 2010 NHL draft.  “We want to make it tougher to play in Florida than it has been in the past,” Tallon said (NHL.com). Erik Gudbranson gave the Panthers a potential game changing defenseman who had the grit, leadership, and character their lineup was severely lacking. Besides bolstering their blue-line for years to come, Gudbranson also gave the Panthers that archetypal, punishing NHL defenseman that would have made Mike Richards and the Philadelphia Flyers think twice about landing a vicious head shot for fear of retaliation.

And sure enough, since Gudbranson’s arrival into the Panthers lineup, the big and bruising 6″5′ defenseman has proven time and time again that he’s going to be a great defenseman in the NHL one day, and that he’ll drop his gloves in a heartbeat if someone takes a run at one of his teammates. In the fight below, you can see how hard Gudbranson throws a punch, but the real story is behind the scenes, in the conversation between Panthers sportscaster’s Steve Goldstein and Billy Lindsay, as they discuss what Gudbranson’s presence on the ice brings to the Panthers while he protects teammate Ed Jovonovski from Zac Rinaldo.

Although his actions speak for themselves, Gudbranson is also a vocal leader off the ice. When asked about the state of the Panthers at the end of the season after they were already far removed from playoff contention, his leadership was evident; “To me it’s just about what you do on the ice, it’s what you do in the dressing room. I think it starts now. The environment here needs to change. We need to become winners here. I think for these last nine games pushing ourselves to the limit and going out and playing well, playing hard, playing together, is going to be a huge factor for next year” (Sun-Sentinel).

Those are the kind of words that Panthers fans and the rest of the guys in the locker room want to hear from a future captain.  And unlike most hockey players, he’s not shy in front of the cameras either. Every time Gudbranson is asked a question, he puts a lot of thought and care into his answers, often going far beyond those one-liner cliche’s we’ve come to expect from NHL players.

But Gudbranson isn’t only a leader on the ice and in the locker room, this year he won the Ambassador Community award for his off-ice contributions and was nominated by the Panthers for the King Clancy Memorial Trophy. “The King Clancy is awarded to the player in the NHL who best exemplifies leadership qualities both on and off the ice and has made a noteworthy humanitarian contribution in his community” (FloridaPanthers).

Since Gudbranson is a restricted free agent this summer of 2014, the Panthers still hold his rights, but he’s no longer on the 3 year entry level contract. Promoting him to captain now will give him that extra assurance he’s still in the Panthers long term plans. A move like that is likely make him feel more invested in being a Florida Panther and inclined to sign a long term deal when the time comes. The Panthers need to build roots with the players they’ve drafted for once, and hopefully for the Panthers, that “C” on his chest will keep him from entertaining too many other options around the league when he becomes an unrestricted free agent in his prime.

Another reason he’s deserving of the captaincy is because out of the entire crop of new players the Panthers have selected in the Tallon era, Gudbranson is the only one who’s had any NHL playoff experience. And in that 7 game series against the New Jersey Devils, Gudbranson played like a man far beyond his years. He really stood up to the speed and physicality of the NHL playoffs and became one of the Panthers’ best players in that series. Although he only has 7 games of playoff experience, that type of experience is invaluable in a post-season playoff run on a team like the Panthers. It’s just as many playoff games Stephen Weiss played after a decade as a Panther.

Passing of the Torch

There’s a lot of respect between players. You can’t just rip the “C” off a guy who’s had as decorated of a career as Ed Jovonovski, but the Jovocop is getting up there in years. Although Ed Jovonovski still has one year left on his contract, no one is certain Jovo will be playing in the NHL next season after his decline in performance over the past few years as well as injuries that have kept him bouncing in and out of the lineup.

But when Jovonovski has played, he’s often been paired with Gudbranson. He’s been showing Erik the ropes and giving him that hands on experience young defenseman so desperately need in their transition to the NHL. They have a lot in common too. Other than being teammates, line-mates, and their similarities in size and grit, both also entered the league in Panthers uniforms and were thrust into the NHL playoffs in their rookie seasons where they learned how to play like men. Gudbranson is like Jovo’s little protege’, and likely his lasting impression on the league. So if you think about it, it’s hard to imagine a more suitable guy on the team for Ed Jovonovski to pass the torch of captaincy onto other than Erik Gudbranson, since Erik Gudbranson is the closest thing the Panthers have ever had to Ed Jovonovski. 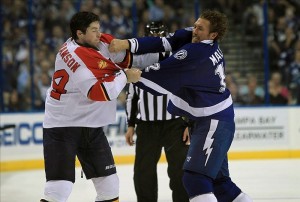 In the end, there‘s not just one particular trait that would make Gudbranson a great captain for the Panthers; it’s a total package of intangibles. Giving Gudbranson the captaincy in the 2014-15 season is like handing the keys over to the youth movement the Panthers are building upon. And if the Panthers wanted to really prove to the fans that the seeds they’ve gathered at the draft in recent years are growing their roots in South Florida, then why not hand them the ropes of the team and give those draft picks more responsibility for the state of the team? Soon those first round draft picks will have to take off their training wheels and start playing like veterans, and giving Gudbranson the captaincy would only give the youth a little more confidence and a little more swagger to carry the team down that long road from the bottom of the east to the Stanley Cup.