With the Florida Panthers finally back in the NHL playoffs, a new generation of fans is finally getting to experience one of the best traditions in hockey. For older Panthers fans, the return of the rats to South Florida is a sight for sore eyes and leads them to fondly remember the Panthers magical run to the Stanley Cup Finals in 1996. Yet, for the younger generation, a brief history lesson may be in order about the story behind the flying vermin. 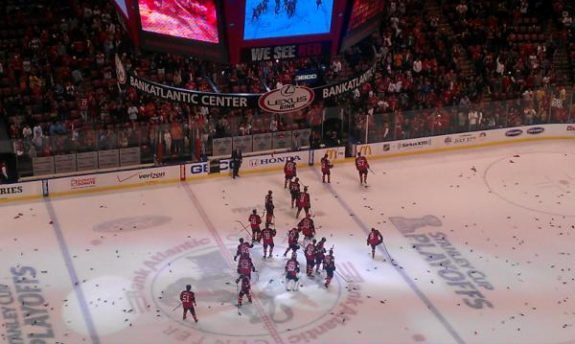 Plastic rats surround the Panther players as they skate off the ice. (Frank Rekas \\ theRatTrick.com)

The Origins of the Florida Panthers Rats

The story of the rats goes back to October 8th, 1995. Prior to a game against the Calgary Flames, a rat appeared in the Florida Panthers’ locker room in the old Miami Arena. Former Panthers’ captain Scott Mellanby jumped up, grabbed a stick, and smacked the pesky rodent against a wall. Later that night, Mellanby scored two goals, leading then Panthers’ goalie John Vanbiesbrouck to quip, “He scored a rat trick”.

As the legend goes, the next night a fan threw a plastic rat on the ice. The next night, a few more rodents found themselves sliding across the playing surface. A South Florida hockey tradition had been born and the Year of the Rat was in full swing.

During that season, fans would throw rats onto the ice after every goal, leading the Panthers to partner with the exterminator company Orkin and have men in exterminator uniforms clean up the  rink. It was incredible to see opposing goalies, arguably the toughest athletes of any sport, cowering in their nets as the rats rained down upon them. Due to the Panthers new tradition, the Miami Arena became one of the most raucous and hostile in sports.

However, as the Panthers faded from relevance, so did the Florida Panthers rats. Fans no longer threw them at games and they seemed to be only a distant memory.

Resurgence of the Florida Panthers Rats

Yet, for whatever reason, something happened this year and with this group of Panthers. For the first time in recent memory, fans began to throw rats again after the team won. Call it a coincidence if you will, but the return of the rats has also coincided with the team’s return to the playoffs and even their first Southeast Division crown.

The new ownership, which had already brought back a version of the classic red sweaters, embraced the tradition and began selling plastic rats at the Bank Atlantic Center. It’s clear that the team has equally embraced the tradition too, often talking about the 1996 Cup run and how wonderful it is to see the fans involved again. Many players have even scooped up rats as souvenirs after key wins.

Believe it or not, but the rats are actually becoming a storyline in the first round playoff series against the New Jersey Devils. The flying rodents seem to have gotten to certain Devils players, including Martin Brodeur. The NHL has asked the Panthers organization to stop selling rats in the arena, after a few made their way onto the ice during game play. Of course, the Panthers claimed that these were due to Devils’ fans, trying to get their team an advantage.

Whatever side you choose to believe, it’s hard to deny the tradition’s importance for Panthers fans. The reemergence of the Florida Panthers rats, along with the team’s success, has reinvigorated a once lethargic fan base. Perhaps, if the Panthers continue to have success, the younger generation of Panthers fans will finally have fond memories of their own.

This article was originally published in April, 2012.