This season, I have watched and read about the verbal abuse shown to young men who play NHL hockey by fans. The prevailing “wisdom” seems to be that fans, because they pay to attend hockey games, have a right to boo players who don’t perform to their expectations. I have heard it called “tough love,” and perhaps some fans even believe that the verbal abuse they direct towards players helps them perform better. That’s crazy.

There’s cheering and booing throughout the course of a game, but that isn’t what I’m talking about. Most people know the difference between booing and abuse. When fans heap relentless tirades of violent, verbal abuse at those who play the sport we love, that crosses the line. At best, such behavior is infantile and harmful. At its worst, such abuse is a sickness.

Here’s some of what I’ve seen this season as I have covered the Toronto Maple Leafs and the Vancouver Canucks.

During the Jan. 14 game against the Colorado Avalanche in Toronto, defenseman Jake Gardiner made a huge on-ice mistake that led to an Avalanche goal. Maple Leafs fans let Gardiner hear about it, over and over again, booing him loudly every time he touched the puck during the third period.

On Jan. 15, television and newspapers asked the question “Is it OK for fans to boo players?” On THW, a number of writers reviewed the topic, including myself. My post was titled “Why Jake Gardiner Will Leave the Toronto Maple Leafs.” To see how the booing impacted Gardiner, click on this video link. He was emotionally devastated.

On Feb. 28, the Maple Leafs lost to the New York Islanders 6-1 in New York. It was John Tavares’ first return to play the Islanders since he signed with the Maple Leafs. Islanders’ management played a tribute video to Tavares before the game, thanking him for his time in New York. However, fans reacted differently. They booed him, held up signs saying “traitor” and threw snakes on the ice when Tavares saluted them when the video ended.

Prior to the game, a New York TV station primed that behavior by airing a video of fans talking about Tavares’ departure using words like “traitor” and “snake.” The video went viral on social media. There’s little doubt that video encouraged fans’ reaction to Tavares.

#DearJohn, you made the right decision to get out of there. https://t.co/3fctiBhAWi

Interestingly, former Islander teammate Ryan Strome noted, after Tavares was accused of self-centered behavior, “The funny thing is that I have never played with anyone who did so much behind the scenes on behalf of his teammates and the organization. Just little things like organizing dinners, making sure we were in the proper hotels, setting things up for wives, girlfriends and families. He looked after all of those things, all the time.” Strome added, “In it for himself? That’s pretty funny.”

On March 5, it was reported that ex-Canuck prospect Jonathan Dahlén closed his social media accounts because he had received hateful messages from Canucks fans. Apparently, after the 21-year-old was traded to the San Jose Sharks at the 2019 NHL Trade Deadline, word got out that Dahlén had requested the trade, something the young player denied.

However, in an interview with the Swedish publication Hockey News, he said “They (Canuck fans) have written very hateful messages and it ended with me removing both Twitter and Instagram. I have tried to keep myself in the dark now and am focused on trying to feel a bit better.”

Obviously, when a 21-year-old young man says he’s “trying to keep himself in the dark” and is “focused on trying to feel a bit better,” it’s clear how deeply hurt he was by the fans’ social media abuse.

Even the Edmonton Oilers’ beloved Connor McDavid reports fan verbal abuse. In a 2018 interview in the magazine GQ, McDavid shared the reactions of Oiler fans. He noted, “It was awful. It was terrible. It was miserable around town. I remember everyone just chirping at you all the time. I was at dinner one time with my parents, and I was walking out and guys were chirping me. They’re passionate people and passionate fans. When you’re winning, you’re a hero in this city, and when you’re losing they want to run you right out of it.”

Former Oiler Ryan Whitney (on his Spittin’ Chiclets podcast) talked about how Edmonton fans abused Penner. As Whitney reported, the team had to walk through the hallway to the ice and Penner told Whitney before his first game as an Oiler: “‘Wait until you hear the verbal abuse I take on this walk out.’ And then door would open and all of a sudden it was, ‘Penner! you fat f*ck! You piece of sh*t, you lazy f*ck! Oh my god, they paid you for this. You piece of sh*t! F*ck you Penner,’” (from “Terrible in Edmonton when team is losing, say Connor McDavid and Ryan Whitney” – The Edmonton Journal – 9/25/18).

What’s sick is that the incidents I am describing don’t just happen to well-paid men who wear NHL uniforms. These incidents are happening throughout hockey, from the NHL to the lowest level of kids just trying to have fun playing a game. A 2015 survey by the Angus Reid Institute found that nine in ten young hockey fans believe verbal abuse is a serious issue. The survey also reported that young hockey players believe verbal abuse is increasing. 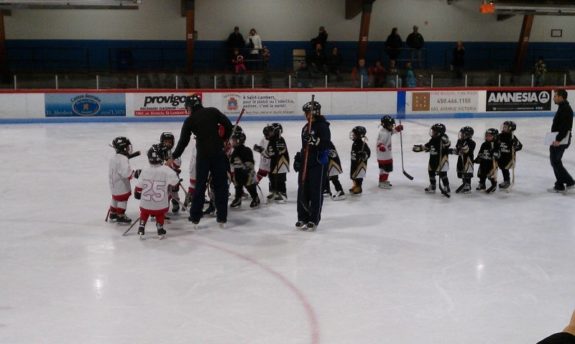 The behavior is common: 59 percent of fans report that referees face verbal abuse and 49 percent report parents yelling at children. Aaron Benarroch, a hockey fan, noted, “I’ve often seen spectators who often say things that instigate some of the players reactions which is unfortunate.”

The verbal abuse NHL players face is also expressed at children who play hockey. The hurt Gardiner, Tavares and Dahlén (by the way, none of whom are older than 28 years of age) face is also experienced by 10-year-olds. Imagine how being sworn at and threatened impacts the fun children have playing Canada’s game. Finally, imagine what children are learning about how they should live as adults.

A 2018 report in the Sudbury Star noted that the Northern Ontario Hockey Association had enacted a rule to halt the abuse young officials receive from “overly intense” hockey fans. Specifically, the new rule states, when referees received excessive verbal abuse, profanity and even physical threats from the mouths of fans, these fans would be ejected from arenas and games could be suspended.

Referees are instructed to: “come to a stationary position … point their hand to the fan and then point to the lobby. There will be no comments. If the fan doesn’t leave … go to both benches and explain what is going on … then put two minutes on the time clock, and if the fan doesn’t leave after that the game will be suspended.”

The league finally decided that threats like, “I’m going to meet you in the parking lot after the game” or personal comments about 18-year-old referees’ families should not be tolerated. Fan abuse has become so pervasive that there has been a steady decline in people returning as referees. The newspaper reported, “The majority of referees not returning is due to excessive fan abuse.” In 2016 to 2017, the league had 625 officials. In 2018, the number dropped to 592, and this year there were 482 officials.

What’s the Explanation for Verbal Abuse?

University-based academic Nathan Kalman-Lamb, author of the book Game Misconduct: Injury, Fandom, and the Business of Sport (2018), notes, “Fans view athletes as little more than objects into whom they can vicariously invest their desires, hopes and dreams.” Kalman-Lamb’s research found that fans feel little compunction about directing verbal abuse at players and don’t think twice about exhorting them to suffer violence and injury. In fact, he believes the harm athletes experience only confirms that sport is worth caring about.

His book cites a former NHL player who shared: “The effort and the sacrifice to play is out of this world and it’s something that people don’t know.” Specifically, we learned that Gardiner has  been playing hurt with back spasms for months. Might his injury have contributed to his on-ice mistake?

Kalman-Lamb cites a second former NHL player: “[Fans] see the athlete, they see them on the field or on the ice, and they expect that performance to be there every night and sometimes the player is dealing with something, it could be emotional, but most times it’s physical, that would limit them from performing at their best.”

Anyone who really watches a hockey game understands that it’s a hard game for and on the men who play it. Kalman-Lamb’s research found that fans who are verbally abusive can only be that way if they effectively dehumanize the players they cheer for and against – as Tavares experienced in New York. Dehumanization occurs either through the abusive behavior they direct towards players or the lack of compassion they feel for the physical suffering athletes must endure to play.

Finally, Kalman-Lamb notes, “The real issue is that we live in a society that systematically propels fans to seek meaning in spectator sport to compensate for the hardship in their own lives.” Sadly, that behavior doesn’t work: the problems don’t go away, but players are harmed by the abuse they face.

No Amount of Money, Success, or Status Is a Barrier Against Abuse

My point is that verbal violence against hockey players is a sickness. In my experience, no amount of success or status protects one from the harm caused by other people’s abusive behavior, and I’m in my 70s. I cannot imagine how hard it must be for Gardiner and Tavares to be abused verbally. I think fans sometimes forget just how young these men are.

Perhaps worse is that children who play hockey or teenagers who ref hockey also suffer verbal abuse. My grandson, at 10 years old, plays hockey. My daughter-in-law coaches his team and my son manages it. This is my family, and if I heard them being verbally abused by fans, you can believe I would try to stop that abuse.

I refuse to believe we should allow NHL players to suffer that same abuse. If the prevailing wisdom is that we should allow fans, because they pay for tickets, to act however they wish towards players, that prevailing wisdom is simply wrong. And, it’s time the rest of us who care about this magnificent game do what we can to stop such abuse. It’s hurting players, and it’s hurting hockey.