Tuesday night’s loss was a tough pill to swallow for the Penguins.

They fell to 22-4-1 after scoring the first goal and lost for the first time when leading after the first period (18-1-0).

It started promisingly enough; with Evgeni Malkin notching his first marker since returning from injury.

Patrick Hornqvist continued with his hot hand, scoring after a couple of beautiful passes from Sidney Crosby then Olli Maatta to make it 2-0 Pittsburgh early in the second.

Unfortunately, playing in the second of back-to-back contests with some travel thrown in the middle for good measure; not to mention a more physical and better-rested Washington Capitals team that woke up half-way through the game, eventually spelled doom for the Penguins.

After the game, Patrick Hornqvist told the gathered media in the locker room that the Pens “need to learn from this.”

Kris Letang had his own take on just where – and how – things went wrong:

“In the second, they took the momentum back away from us. They started to be physical. We kind of backed up. As a speed team, we have to answer back with someone playing physical. We can’t just take it and accept what they’re doing.”

The Penguins are learning just what kind of team they are; precisely where their strengths lie.

Their overall team speed will be their biggest asset/weapon come the Stanley Cup Playoffs (assuming they make the playoffs). What they can’t do, however, is allow a “heavier” team to bully them and push them around.

Their speed alone will not be enough for the Penguins in the playoffs. Pittsburgh will need to develop a more physical game come playoff time, to pair with that speed.

Paving the Road Ahead

Overall, the loss to the Caps on Tuesday night had little effect on the Penguins’ playoff positioning. Sure the two points would have been nice, but they remain three points ahead of the Philadelphia Flyers in the race for the final playoff spot, with each team having 20 games remaining.

Three of those games remaining, however, are against one another, and the Penguins have a less-than-stellar record against the Metropolitan Division. 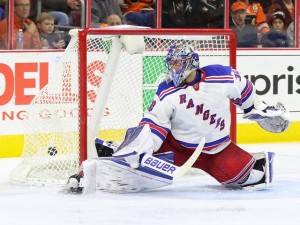 While the game in our nation’s capital was an over-hyped potential playoff preview, arguably the most important game of this week takes place later tonight at Consol Energy Center.

The New York Rangers – the Pens’ kryptonite – are in town.

This is arguably the game that will ultimately test the Penguins’ team identity.

The Rangers have eliminated the Penguins from the playoffs in each of the past two seasons, and scoring on Henrik Lundqvist has proven to be – well let’s just say that the Pens have had a better chance of landing on the moon.

The Rangers came to Pittsburgh back on February 10th and handed the Penguins a thorough drubbing 3-0.

This is another possible playoff preview, and the Penguins will need to solve the Lundqvist riddle if they hope to better position themselves.

It’s no secret that the Stanley Cup Playoffs are an altogether different beast than the NHL’s regular season.

Teams play much more defensively. The referees typically put away their whistles. Marc Staal gets away with assault.

The fact is the game tightens up come playoff time. Team speed can be the ultimate difference in advancing to the next round. Wearing down the opponent’s blue line with quickness and making them chase constantly can be the advantage that the Penguins need.

But size and hitting can also wear down a team. Especially a team that is smaller in stature, like the Pens. Something that the Capitals put on clear display on Tuesday night.

With heavy hitters being able to get away with later checks – not to mention higher on the body – a team can find itself getting worn down and just unwilling to battle for loose pucks. A seven-game series can be a nightmare for a club that finds itself on the constant “hittee” side of the equation.

In the past, the Penguins have let the emotional toll of taking so many hits get the better of them. They’ve taken stupid, retaliatory penalties in critical moments of a game. They’ve gone after hits that have taken them out of position. That can’t happen this year; lest the past come back to haunt them.

The Penguins are finally starting to look like the Penguins again. Crisp outlet passes by the defensemen. Speed through the neutral zone, and lots of shots. This is a recipe for playoff success.

As evidenced in previous games on home ice; these new, faster Penguins can certainly fill the net. Over their past ten home games, they’ve scored a total of 46 goals (one of those games was the 3-0 shutout loss to the Rangers). That’s an average of 4.6 goals per game. Imagine translating that to the playoffs. Combine that with having allowed only 25 goals in those same ten games, and the Penguins are outscoring their opponents by two goals a game.

They’ll have to take the lessons that they (hopefully) learned in DC Tuesday night and carry those over to their remaining 20 games and into the playoffs.

Don’t try to be something you’re not: a big, physical, hard-hitting team. Hit when its appropriate, and don’t chase the big one.

Let your strengths work to your favor: speed, skill, quickness can all wear a team down just the same. Bigger teams get worn down quicker due to constantly chasing and trying to hit what they can’t catch.

And put those lessons learned into practice beginning tonight with the Rangers.

Thanks for reading. Follow me @TorraoOnPucks for all the latest Penguins analysis and playoff intel as we move closer to the end of the regular season.