Scott Perunovich isn’t a household name, even for fans of the St. Louis Blues, the team that drafted him 45th overall in this past June’s NHL entry draft. Due to his minor injury at the Blues’ rookie camp, as well as his absence from the prospect tournament in Traverse City, Blues’ fans haven’t seen much of the diminutive defenseman of whom the Blues thought so highly that they brought his personalized jersey to the draft, even in the second round.

But Perunovich is certainly a household names to fans of college hockey. Last year, he took home the Tim Taylor Award as the national rookie of the year in the NCAA, along with many other titles (including the NCHC offensive defenseman of the year). He collected 11 goals and 36 points in 42 games, and led all freshmen in plus-minus with a plus-20. Perunovich was a major contributor to his University of Minnesota-Duluth Bulldogs, who went on to win their second National Championship.

It was an impressive season, particularly for a freshman, but if the first month of the college hockey season is any indication, Perunovich is just getting started.

UMD Back on Top

After a national championship campaign, it’s no surprise that Minnesota-Duluth started the year on top in the preseason polls. After a pair of losses to start the season, they slipped down the polls; however, thanks in no small part to the stellar play of Perunovich, the most recent poll sees them back atop the NCAA as the number one team in college hockey, with 47 first place votes.

Perunovich has been critical in that return to number one, as his 11 points currently leads the team. He’s amassed those 11 points (one goal, 10 assists) in just eight games, putting him on pace for 57 points in a full season. That total, should he achieve, would certainly put him amongst the NCAA’s elite scorers. Last season, 57 points would have made him second amongst all scorers and first amongst defensemen by a country mile (the next highest scoring defenseman had 42 points).

Whether or not he stays as hot as he’s been, Perunovich has the ability to put up points in bursts. Earlier this season, he scored six points in one weekend, which earned him recognition as the first star of the week in the NCAA. A few more weeks like that will make Perunovich a strong contender for the top prize in the NCAA: the Hobey Baker Memorial Award.

The Hobey Baker Memorial Award is given annually to the NCAA hockey player who best “exhibits strength of character both on and off the ice” and “contributes to the integrity of the team and displays outstanding skills in all phases of the game.” It is hockey’s equivalent to the Heisman Trophy, the top prize in all of collegiate hockey. Last season, the award went to the NCAA’s top scorer Adam Gaudette, who is now playing with the Vancouver Canucks. Other recent winners have included Will Butcher, Jack Eichel, and Johnny Geaudreau.

If Perunovich were to even be considered for the Hobey Baker Award, it would be a considerable accomplishment. In the 38 year history of the award, it has only been given to a defenseman seven times, with Butcher being the most recent of those recipients. Before Butcher, the last winner was 2009’s Matt Gilroy.

Additionally, three of the seven defenseman who have taken home the trophy have led their team to the national championship in the process, which is significant because only three of the 31 forwards have done both in the same season. It would be an uphill battle for Perunovich to take home the Hobey Baker Award, but it’s not entirely out of the question.

Perunovich currently sits in the top fifteen in scoring with his eleven points. His team’s presence among the most elite teams in the NCAA means that every point he scores will receive additional scrutiny and notoriety. His team’s high profile can only help him in pursuing this prize. 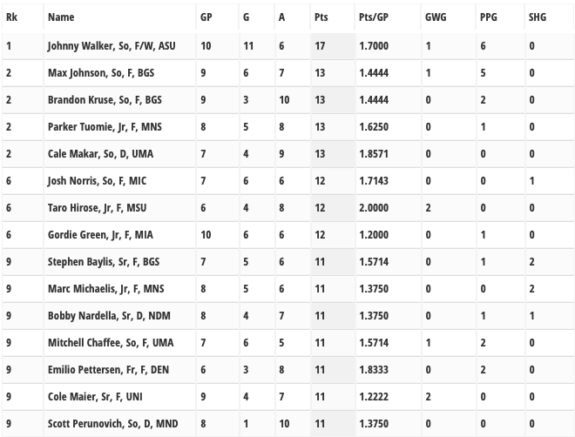 Still, Perunovich has a number of factors going against him, (as evidenced in the above graphic from uscho.com.) including the fact that he’s neck and neck with Cale Makar, a top prospect in the Avalanche system,  and Bobby Nardella for the points lead amongst defenseman. He will need to outrace both  Makar and Nardella and keep himself at the very top of the scoring list to actually bring home the Hobey Baker Award. But whether he wins it or not, Perunovich has a bright future in hockey.

The Blues were eager to draft Perunovich, despite the fact that he had been passed up on in two previous drafts. He’s undersized, at just 5-foot-9, 172 pounds according to elite prospects, but that’s becoming more and more in vogue in the NHL. Smaller, puck-moving defensemen like Ryan Ellis and Jared Spurgeon are more and more accepted in the league these days, and Perunovich hopes to fit into that mold and become a top NHL point producer.

While the Blues’ pool of defensive prospects has become more shallow in recent years as players like Vince Dunn and Jordan Schmaltz have graduated, they are stronger on the left side, where Perunovich plays. He will have to battle with more experienced prospects like Jake Walman and Niko Mikkola to earn an opportunity in the NHL, but with players like Carl Gunnarsson and Jay Bouwmeester on expiring contracts, there are some spots opening up.

Whether Perunovich arrives next season or the year after for the Blues, he has a bright future. He’s a clever puck handler and playmaker, who can create points in droves and could quarterback a power play in the NHL in the future. The Blues knew what they were doing when they stitched Perunovich onto the back of a jersey at the draft, drafting a bright, young defensive prospect who will help their defense evolve into the faster, smaller and more dynamic style of defense we see in the NHL today.