The second day of the 2017 World Junior Championship featured eight teams, a massive upset and more than one blowout. There wasn’t a marquee match like Monday, but that didn’t stop the tournament from providing surprises and a couple of standout performances.

Here’s a look at eight individuals who thrived on day two of the tournament.

Canada obliterated Slovakia. The Slovaks took just 11 percent of the shot attempts and were outshot 44-6. There was basically no positive takeaway for Slovakia aside from goaltender Adam Huska having some good moments.

Shots on goal locations from @HC_WJC's 5-0 win over Slovakia at the #WJC2017. #TeamCanada had 23 "home plate shots." #fancystats pic.twitter.com/cclSJXR695

Meanwhile, the sexy stat lines were many for the red and white. Here, there’s just one standout, because a lot of Canadians posted notable stats.

Monday, Cirelli had no points and no shots. He only saw 12:45 of ice time Tuesday, but managed to contribute a goal, an assist and a pair of shots. After a lackluster opener, he was notably improved.

Cirelli assisted on the fifth goal of the game, a marker from Michael McLeod, who saw less than three minutes of ice in the tournament opener. Cirelli recovered a poor Slovak breakout in the neutral zone and moved the play back toward Huska.

Also notable was Thomas Chabot, who was featured in Monday’s standouts as well. He was named Player of the Game on Tuesday, leading the team in ice time once again and posting a pair of points.

Group A became interesting Wednesday. Interesting, as in who knows what the hell is going on anymore. With Denmark upsetting the Finns, the Czechs are well positioned even after suffering an overtime loss to the Swiss.

On the Czech side, Chlapik poured it on late. His 18:44 of ice time was third among team forwards, behind Michael Spacek and David Kase, who have both put up a couple of solid games.

Chlapik added a pair of goals and six shots in Wednesday’s overtime loss. That included a goal with 16 seconds left in regulation to force overtime.

There’s a consensus that Hischier is the top prospect for the 2017 Draft at World Juniors. Tuesday’s game against the Czechs was his debut and he did not disappoint.

The team leaned hard on him as the game stayed tight late. He finished with 21:03 of ice time, the second most among team forwards. In regulation, he contributed two assists and a pair of shots. Then, in overtime, he was the hero, potting a breakaway during 3-on-3 play.

Yes, that means the 17-year-old was involved in three of four goals as the Swiss grabbed an OT win to open the tournament. His first assist featured strong board play, impressive work in tight spaces and a beautiful pass to set up Loic In Albon. 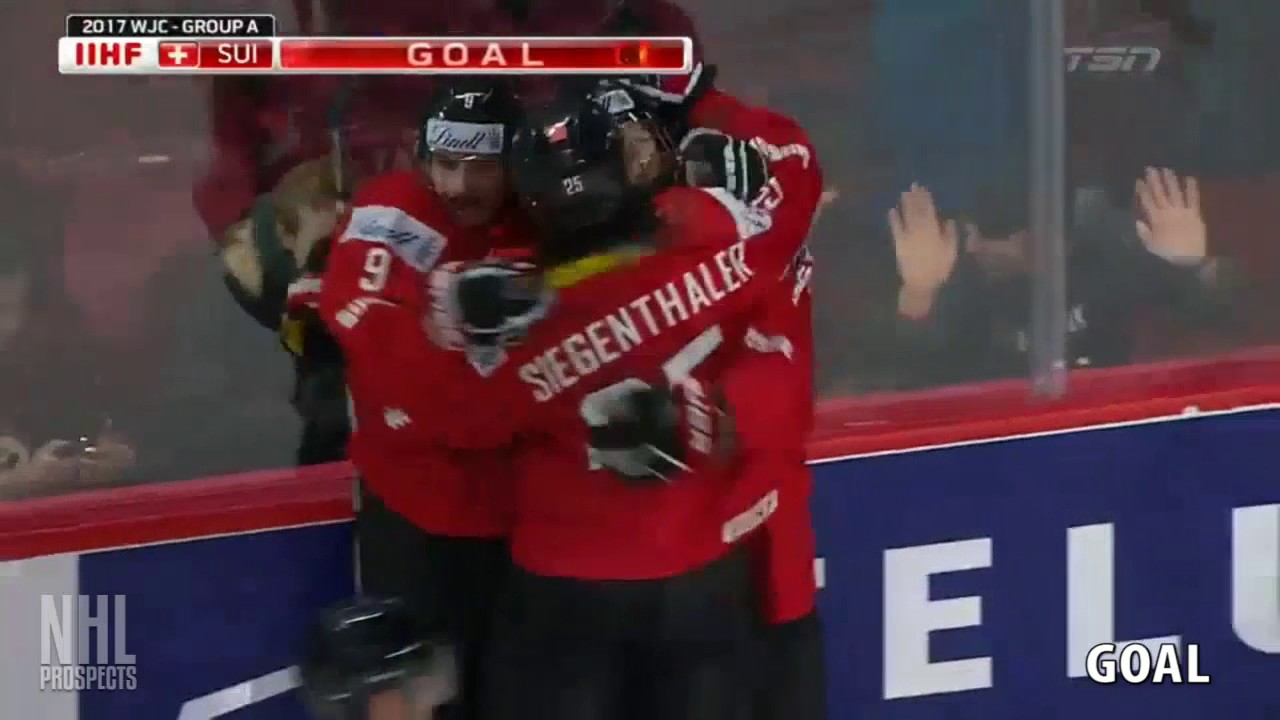 The Russian captain broke out for a huge game as the Russians throttled Latvia (including taking a time out when up 7-1 in the third to set up a power play on which they scored). Kaprizov grabbed the 2017 World Juniors’ first hat trick in a game where he recorded five total points and seven shots.

With Alexander Polunin finding his rhythm Tuesday (we’ll get to him), the entire top line was outstanding. They were clearly up against a weaker roster, but Kaprizov was everywhere doing things to help Russia keep the forecheck going.

Krog was the netminder behind Wednesday’s biggest surprise. Though they only put 10 shots on net, Denmark beat Finland 3-2. That means it was a no good rotten very bad day for Finnish goaltenders. Though Veini Vehvilainen gave up two goals on three shots in the first period, a big part of the victory was strong play from Krog, who stymied the Finnish attack.

The 18-year-old goalie was named Denmark’s Player of the Game, stopping 34 shots. His outstanding effort created a situation where Denmark, who was the odds-on favorite to head to relegation from Group A, might not face that fate. There’s a lot of tournament left to play, but that upset will loom large for both Denmark and Finland.

Polunin had a poor game to start the tournament and saw himself demoted from the top line. He was back on the first line Tuesday and the message had been received. He was one of Russia’s best players against Latvia.

Polunin looked confident throughout the game. He was effective on the forecheck and thrived playing the left side on the power play, setting himself up for a few one-timer opportunities where he nearly beheaded Latvian netminder Gustavs Grigals.

He finished the game with two goals and four points. It was an impressive game for Russia’s top line, even though they were playing an outmatched opponent.

Riat was one of a select few Swiss players who shouldered a huge load for the team in Wednesday’s win. Riat, Hischier and Calvin Thurkauf exceeded expectations, logging a ton of minutes and putting some points on the board. Riat posted a goal and three points with three shots.