In just a few days, 2016 will wrap up and the new year will begin. For the Philadelphia Flyers, 2016 will be marked down as a successful year — in the standings and in other areas. They made the playoffs after a season’s absence, ahead of schedule, but there are plenty of other things to review on the team’s 2016 calendar.

The second half of last season saw the Flyers push for the playoffs as the team ingrained itself in coach Dave Hakstol’s system and Shayne Gostisbehere continued his sensational year. However, it was a trade just six days into the new year that may go down as a victory for years to come.

On Jan. 6, general manager Ron Hextall dealt Vincent Lecavalier and Luke Schenn to the Los Angeles Kings for Jordan Weal and a 2016 third-round pick. At 35-years-old, a $4.5 million cap hit and two more seasons left on his contract, Lecavalier was the biggest albatross on Philadelphia’s salary cap. By granting the former Lightning captain’s wish to send him elsewhere, Lecavalier agreed to retire at the end of the year.

The Flyers had to retain 50% of his and Schenn’s salary to make the deal and also lost a serviceable defenseman in Schenn, but already had seven NHL defensemen on the roster and Andrew MacDonald in the AHL. Weal is now the Phantoms’ leading scorer and the team selected Carsen Twarynski with the acquired third-rounder, adding another positive element to the trade.

At the time of the trade, MacDonald was in the AHL, demoted to create some more cap room. A month after the deal, with more cap to work with, the Flyers recalled MacDonald to replace Michael Del Zotto, who suffered a season-ending injury. 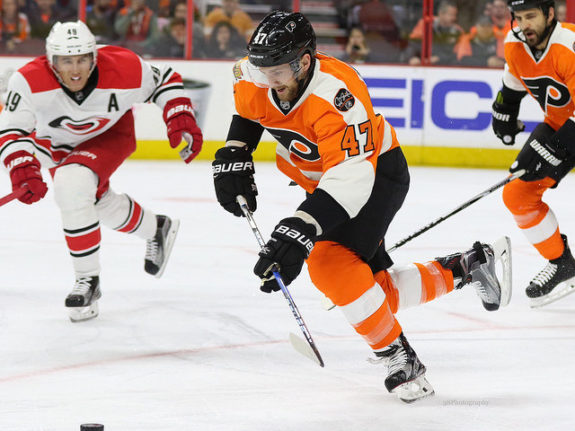 Andrew MacDonald went from AHLer to first pairing defenseman in less than a month (Amy Irvin / The Hockey Writers).

To the chagrin of many Flyers fans, MacDonald was quickly promoted up the lineup. Hakstol paired him with Gostisbehere due to the pair’s experience together at the start of the year with the Phantoms. The rookie continued to excel, but his numbers away from the former Islander were always more impressive.

Despite any deficiencies from MacDonald, Philly cruised in the month of March and clinched a playoff spot with a win over the Pittsburgh Penguins in the second-to-last game of the season. The Flyers settled for the last spot in the Eastern Conference and drew the Presidents Trophy-winning Washington Capitals in the first round.

But a day after the regular season ended and three days before the postseason began, Flyers owner Ed Snider passed away after a battle with bladder cancer. A regular presence in player’s lives and NHL decisions, Snider’s death reverberated around the NHL.

Whether it was Snider’s death or simply the skill of the Capitals, the Flyers got off to a bad start in the playoffs, dropping the first two games and only scoring a single goal. With the series coming to Philadelphia, Flyers fans hoped the home turf and memory of Snider would help propel the team to victory.

The opposite happened in Game 3, despite the Flyers opening the scoring less than a minute into the tilt. Washington tied it three minutes later and scored four in the third to bury the home team 6-1. In a controversial move, Philly fans threw bracelets on the Wells Fargo ice during the third stanza. 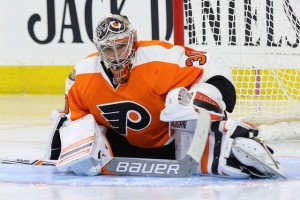 Michal Neuvirth played the best hockey of his Flyers career in the playoffs (Amy Irvin / The Hockey Writers).

For Game 4, the Flyers turned to Michal Neuvirth in net. The former Capital seemed to know something about his old club, stopping 31 shots in a 2-1 win. He followed that up with a shutout win in Game 5.

Neuvirth continued his strong, almost other-worldly play in Game 6, making 28 saves. But it wasn’t enough. The Capitals won a 1-0 decision, moving onto the second round and ending the Flyers’ season.

The Offseason (May – September)

Before the draft or free agency, the Flyers bought out the last year of R.J. Umberger’s contract, opening up some cap space for this season, but adding more in 2017-18. The forward had played only one game since Feb. 21 and the writing was on the wall for a long time. 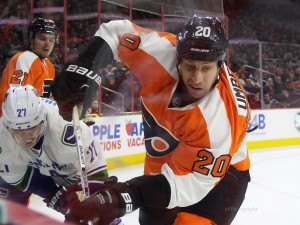 R.J. Umberger was bought out by the Flyers in June (Amy Irvin / The Hockey Writers).

At the draft, at the end of June, Hextall and company moved back in the first round and selected Russian forward German Rubstov with the 22nd pick. They also selected Pascal Laberge, Carter Hart and Wade Allison in the second round.

Besides the buyout of Umberger, Hextall also let Ryan White, Sam Gagner and Evgeny Medvedev walk away from the team when free agency started in July. To replace them, the team signed Dale Weise and Boyd Gordon on July 1.

Later in the month, Hextall signed undrafted Russian Roman Lyubmiov to an entry-level contract and stocked the Phantoms’ cupboard with T.J. Brennan, Will O’Neill and Andy Miele to finish up free agency work. Retained by the team as restricted free agents were Brayden Schenn, Brandon Manning and Nick Cousins.

As training camp neared at the end of the summer, speculation grew if rookies Ivan Provorov and/or Travis Konecny would make the team. Provorov seemed more of a lock, while Konecny would need a strong showing at camp and preseason.

But both impressed in September and earned prominent roles with the team when the season started in October. Fellow rookie Lyubimov also won a spot on the team, but in a fourth-line role.

The first game of the season, a 4-2 win over the Kings, looked like the season would be a promising one for the Flyers. The line of Konecny, Sean Couturier and Jake Voracek played like a sorely-needed second scoring line behind Claude Giroux. 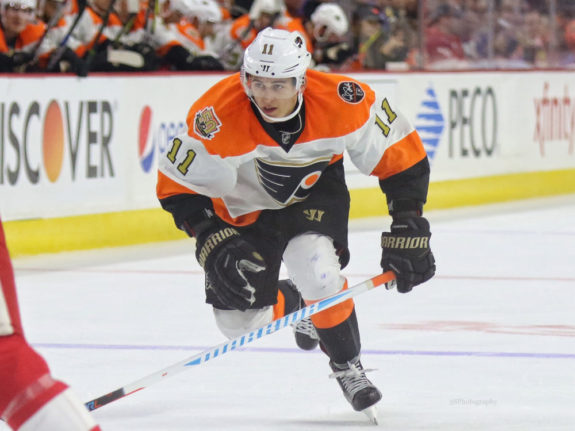 Travis Konecny has been a welcomed addition on the Flyers’ second line (Amy Irvin / The Hockey Writers).

The offense kept flowing from there for the most part, but goaltending, one of the Flyers’ best assets from 2015-16, was struggling and earning the team losses. Behind consistently bad netminding, Philly was 7-7-3 and out of the playoff picture by the middle of November.

Newcomers Weise and Gordon also struggled and have become frequent healthy scratches, but Lyubimov has been a relentless forechecker on a line with Pierre-Edouard Bellemare and Chris Vandevelde.

An injury to Neuvirth in the middle of November actually was a blessing in disguise to the team. With minimal competition, Mason settled into the starting role and began to improve.

As the rest of the team followed suit behind Mason, the Flyers rattled off 10 straight wins. Over that stretch, several heroes emerged including Mason, Voracek, Brayden Schenn and even rookie goalie Anthony Stolarz.

The hope now is that a strong run in December will carry over to a strong 2017 where the team will continue its’ rebuild on the fly that took a step ahead in 2016.