Let’s start over:  “A player’s shooting percentage in a given season has more to do with his luck as a shooter than his skill or the way he’s actually playing.”

How about an entire team’s shooting percentage? The supposedly fairly-skilled Los Angeles Kings seem to be suffering through such an “unlucky” season, as they’re second to last in the league in both total and 5-on-5 shooting percentages (7.4% and 6.2% as of 3/20/14). How will such abysmal regular season numbers affect Los Angeles’s chances at a Stanley Cup?

Of course, just two regular seasons ago, a LA squad that finished dead last in both total and 5-on-5 shooting percentages came alive—or more exactly, “regress[ed] to the mean”—in the playoffs. Can we expect such a revival this Spring?

Thanks to sportingcharts.com and hockeyreference.com, here’s a list featuring every Stanley Cup winner since 1967-68 (no shooting percentage data could be found before then), along with their regular season team shooting percentage and league ranking. 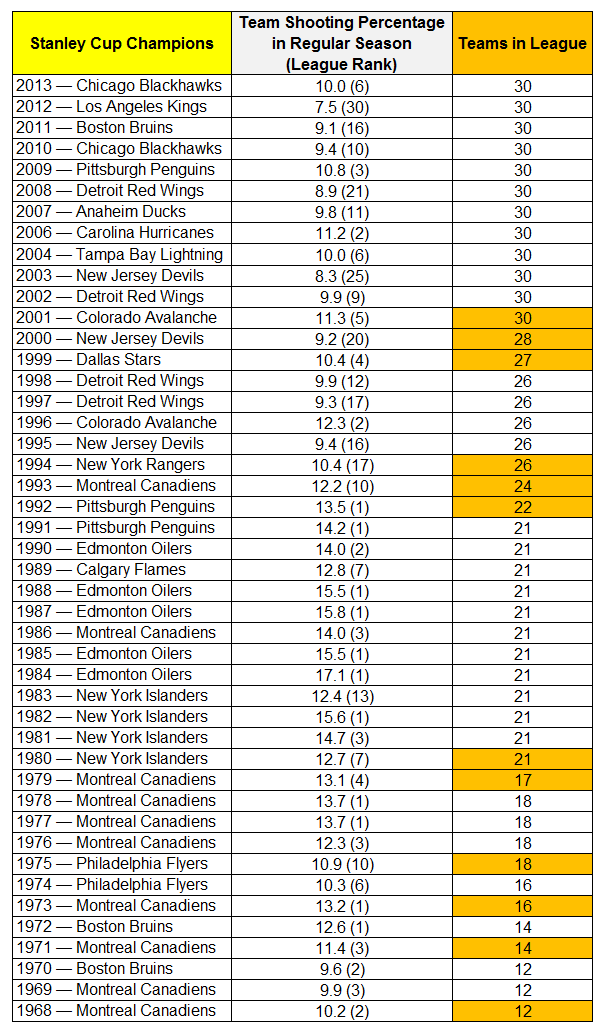 Two things popped out as I was sorting this data. First, the 2012 Kings run was completely unprecedented; only the 2003 New Jersey Devils betrayed a similar, bottom-feeder ranking, and even they were over a full percent point better than last place. However, in a related point, championship teams have been routinely shooting less successfully (compared to their peers) in the regular season since the early ’90s.

1992-93 becomes a sort of demarcation point for this trend.

As for why? Perhaps one can look toward overexpansion? The NHL went from 22 to 24 teams in 1992-93. Hence, was league-wide shooting talent being diluted? However, the influx of skilled European players into the league was building in that period of time. So instead of dilution, was the talent pool actually deeper with this infusion of foreign players? More talent was distributed more evenly among an ever-increasing number of teams; these more equally powerful teams, no pun intended, were “checking” each other’s shooting success. 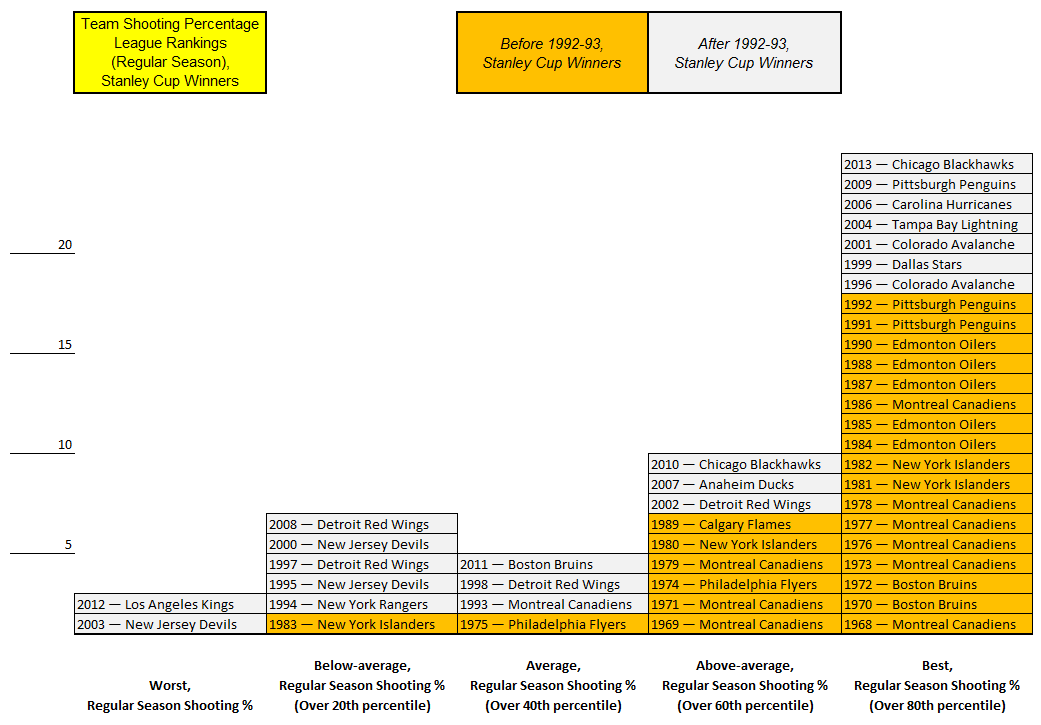 As for this year’s Kings, if you’re optimistic, you believe Dustin Brown’s 7.4 regular season shooting percentage (11.6 from 2010-13), Mike Richards’s ridiculous 6.4 (12.6 from 2007-13), and Slava Voynov’s 2.5 (8.5 from 2011-13) will benefit from greater luck sooner than later. The good news is none of the team’s top scorers are enjoying unusually strong shooting campaigns. The bad news? We’re talking about the same problem that we were talking about two years ago. What are the chances LA rope-a-dopes the whole league once again?