A split of a three-game weekend that ended in one win, one loss and one shootout loss might not seem like a lot of progress, but Rome wasn’t built in a day, and for the AHL’s Texas Stars it’s certainly a step in the right direction. 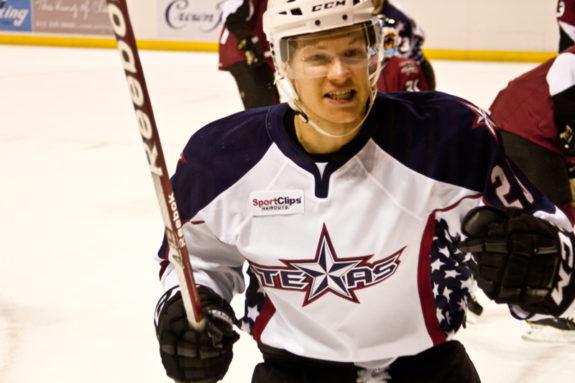 Matt Fraser’s late-game heroics helped the Texas Stars generate a point in their 5-4 shootout loss to lake Erie on November 10, 2012 (Image courtesy of the Texas Stars)

Heading into the weekend with a record of 3-5, Texas started the trio of games off on the wrong foot, getting shut out by the Toronto Marlies 3-0 on Friday. They fought back valiantly against the Lake Erie Monsters on Saturday, but still lost a 5-4 shootout thriller. Not wanting to exit the weekend empty-handed, the team played arguably their best game of the season on Sunday, dropping the state-rival Houston Aeros by a score of 4-2.

Despite only earning three out of a possible six points, those numbers don’t fully tell the tale of how much the Stars improved after their 3-5 start and how often they controlled the play during those games.

Going into Friday with one of the AHL’s least productive offenses, Texas finally seemed to be back on the right track, outshooting Toronto 31-17, including 10-4 after the first period.

The barrage of shots was unfortunately tested against a hot Marlies netminder in Jussi Rynnas, who blanked the Stars for his second shutout in three games this season, increasing his save percentage up to a lofty .968.

Stars netminder Cristopher Nihlstorp wasn’t up to the task despite a solid team defense, allowing three goals on 17 shots, albeit two of those coming against a strong Marlies powerplay.

Friday’s shot totals paled in comparison to one of the best offensive performances in Stars history on Saturday night, as they pelted the Monsters with 49 shots throughout regulation and overtime, including another hot start that saw Texas outshoot Lake Erie by a huge 21-4 margin after the first frame.

Once again, however, Texas found itself up against a red-hot goalie, 2010 Colorado Avalanche second rounder Calvin Pickard, who stopped 45 out of the 49 shots he faced, as well as 3/4 in the shootout. And, once again, Texas’ goaltending wasn’t able to keep up the pace, as 2011 Dallas first rounder Jack Campbell only stopped 22 out of 26.

The head-to-head shootout duel between Pickard and Campbell proved to be the decision-maker, as Campbell allowed the second, third and fourth shots he faced, sealing his team’s defeat.

The game against Lake Erie would have not even gotten to the shootout had it not been for the heroic work of winger Matt Fraser. Fraser registered seven shots on goal and scored twice, both on the powerplay. It was his second goal of the night that was the most important, as he raised a backhand shot past Pickard with a mere one second left on the clock to tie the game and send it to OT. The goals were only his second and third on the season, after finishing 2nd in total goals in the AHL last year.

“He had 37 last year and that’s a huge number,” said Texas head coach Willie Desjardins about Fraser to media after the game (video below). “He expected it to happen easy this year…he put a lot of expectations on himself, so it was good for him to score. He’s got a great release and it was good to see.”

After such a heartbreaking loss, leaving the team at 3-7-0-1, and after already playing in back-to-back nights, it would have been easy for the Stars to call it a weekend, pack it in on Sunday night and focus on the week ahead.

But Texas showcased their will and found a way to persevere on Sunday night in Houston, putting forth their best all-around team effort of the season. Texas jumped out to a 1-0 lead 2:41 into the game, was ahead 3-1 after another strong first period and never looked back, keeping their foot on the gas en route to a much-needed 4-2 win.

It was the only game of the weekend where Texas was outshot (28-25), but the team still capitalized on enough of the quality chances that they had, had many more that didn’t convert, and were supported by an excellent redemption game from netminder Nihlstorp. The Stars used depth to generate their scoring, as no player had more than one point and three out of the team’s four offensive lines produced.

“Guys just kept believing, working hard, shooting the puck,” said Desjardins after the game about his team’s effort. “We brought some energy for three-in-three on the road and it was a big win.”

Although it wasn’t perfect, the games were a much-needed shot in the arm for Texas, and might be the first spark of momentum that the team needs if they want to find success going forward. Even though they did it in a very raw way without perfect results, the Stars were the dominant team throughout the majority of their weekend action, and should increase their win totals if they are able to do that on a consistent basis.

Below is a quick rundown of some of the more notable stories involving individual Stars players:

-Goaltending has been a significant cause for concern thus far, with Nihlstorp currently holding a save percentage of .870 and Campbell sitting at .868, two totals that are far below league average. Though no injuries to either of those two have been announced, Josh Robinson, an undrafted free agent goalie signing out of the NCAA this summer, has been recalled to Texas after starting with a 5-0-1 record and .920 save percentage for the Idaho Steelheads of the ECHL. If Nihlstrop and Campbell continue to struggle, Desjardins might have no other option than to try starting Robinson.

-Defenceman Cam Barker, who is playing in the AHL for the first time since 2008-2009 after spending the time in between playing in the NHL, had only one goal and no assists in the first eight games for Texas, but picked up four assists over the last two games, three of which came on the powerplay. For a 26 year-old player with 296 games of NHL experience, Barker is an automatic cornerstone on the Stars’ blueline and must become a dominant force if the team is to succeed, although that has yet to happen with any consistency. Not only does the success of his current team depend on it, but so does his NHL future, after three increasingly disappointing seasons in Chicago, Minnesota and then Edmonton.

-The pressure on Barker will only increase now that Jordie Benn, one of the other leaders of the Stars blueline, recently suffered what is believed to be a concussion during the game against Lake Erie. Benn missed the next night’s game against Houston, and there is a good chance that he could miss more action beyond that. He has three assists and an even plus-minus in 10 games so far this season.

-After being an accomplished sniper during his NCAA years, Dallas 2009 3rd rounder Reilly Smith has yet to find the twine at the AHL level, going goalless with three assists in all 11 games so far this season. The speedy winger is generating offensive chances, especially playing on the top line with Cody Eakin and Tomas Vincour, but is being relied upon to score goals, and will face increasing pressure and possibly reduced minutes if that doesn’t happen soon.