Dallas fell 5-3 Saturday night to the San Jose Sharks. The loss extended the Stars winless streak to 7 games (0-5-2) which translates into a 4-6-4 overall record. They are last in the Central Division and only 1 point ahead of the last place Edmonton Oilers. Next, the Stars will attempt to get back on track while heading out on the road. Their next game is Tuesday night vs. the Arizona Coyotes. The Stars have been a respectable 3-3 so far on the road so heading out of the Lone Star State might be a good idea for now.

Seguin Moves to Within 1 of Modano 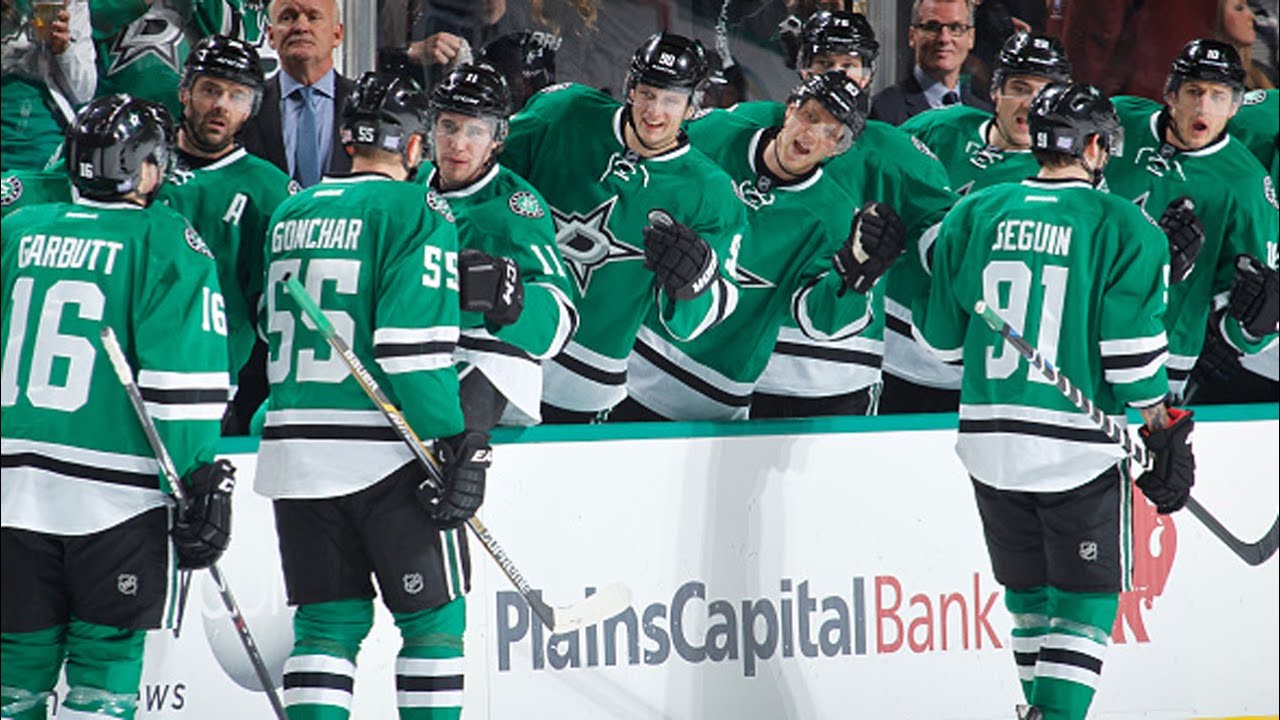 As is often the case with goal scorers, a lucky bounce seemed to spark Stars sniper Tyler Seguin mid way through the first period. What started as a Sergei Gonchar laser shot from the point, hit a Shark player in front of the net, and caromed off Seguin’s chest passed Sharks’ goalie Alex Stalock. Just over 2 minutes later, Seguin would strike again with a more conventional top shelf rocket shot passed Stalock. As the first period was winding down the Sharks’ James Sheppard beat Stars backup goalie Anders Lindback, to cut the lead in half at 2-1. Seguin would strike again on a 2nd period power-play for his 10th goal of the season and 6th hat trick as a Dallas Star. Seguin is now only 1 hat trick behind Hall of Famer Mike Modano’s franchise record 7 career hat tricks. Seguin is tied for 2nd in the league with 10 goals. As the horn sounded to end the 2nd period the Stars appeared to be in control and leading 3-1.

Since coming to the @DallasStars Seguin has averaged a hat trick every 19 games. .

What Is It about the 3rd period?

The Stars continued their season long trend of coming apart at the seams in the 3rd period. The Stars have been outscored 24-9 (21 in 3rd and 3 in OT) after the second period this season. By comparison, Dallas gave up 76 goals after the 2nd period for all of 2013-2014.  The Sharks outscored the Stars 4-0 in the 3rd. Tyler Seguin collided with the Sharks Brent Burns and fell down in the neutral zone. The collision was questionable and arguably could have been a slew-footing penalty. However, the refs deemed it incidental contact and the Sharks went down the ice to score on an odd man rush. Poor execution in the defensive zone led to two more Shark goals before they finished the scoring with an empty net goal. Backup goalie Anders Lindback has had subpar performances in all 3 games he’s played this season . I will be surprised if Jussi Rynnas isn’t called up to replace Lindback in time for Tuesday’s game. While it’s clear Lindback hasn’t performed very well, the same could be said for the Stars skaters. The Stars defenseman aren’t doing a good job moving the puck out of the zone and the forwards are often caught out of position.

Special teams have also been a factor in the Stars slow start. The Stars PK is ranked 26th at 76%, while the PP is ranked 19th at 17.3%. The Stars have too much talent to be outside of the top 15 in either category.

The Stars need more production from newcomer Ales Hemsky. He was brought in for offense and has yet to score a goal in 14 games. Also, lingering injuries to Cody Eakin and Valeri Nichushkin have impacted the Stars depth, but when you look around the league and you will find most teams are missing 2 or 3 significant roster pieces.

The Stars 4 x 4 play has also been poor. They are now tied with Colorado for the most 4 x 4 goals allowed this season with 4. On the surface you would expect Dallas to be a team that benefits from the additional space. Few teams can match up with the skill of a Seguin, Jamie Benn or Jason Spezza, but it seems the additional space only highlights the Stars shoddy team defense and average to poor goaltending.

In each of the last two games the best player on the ice was the opposing goalie. Therefore, the Stars are getting quality chances and certainly they can’t continue to run into hot goalies every night. That being said, Tuesday night should be an interesting goalie match up with Dallas starter Kari Lehtonen likely back in between the pipes to face former Dallas Star, Mike Smith of the Coyotes.

An Update from the Farm

The Texas Stars initially got off to a slow start but are now in 1st place in the West Division of the American Hockey League. They are 2-0-1 in their last 3 games with Travis Morin (16 pts in 10 games) and newcomer defenseman John Klingberg (12 pts in 10 games) leading the way. Goalie Jussi Rynnas is 4-1-1 with a 2.75 GAA and a .907 SAV%.