To coin the phrase by Old School’s Frank the Tank, “we’re going streaking”. If there was a slogan chosen by the Maple Leafs this season that would sum up their play this might very well be it. Of course during the raunchy comedy Will Ferrell uttered the expression with a much different connotation than maybe the Buds version of the little ditty.

Leafs have been very streaky recently with runs of 8-1-1 and 1-5-0. After a win to Boston on New Year’s Eve, the team recorded just its second win in the last seven games and though they continue to be up and down, for the most part the 2014-15 season has been a success for the team.

Holding Up to Last Season

The Leafs currently hold down the first Wild Card spot in the East with 45 points through their first 38 games, at times coming within a couple points of taking over the first spot in the East, but evidently dropping a couple games before being able to reach the top.
This season the team is on pace to finish with a respectable 97 points, a very interesting number with things considered. Last year the Detroit Red Wings and Columbus Blue Jackets clinched the two Wild Card spots in the East with 93 points, so if things stay the course as they did one season ago, the Leafs might be able to muster their second playoff berth in the last 10 years. 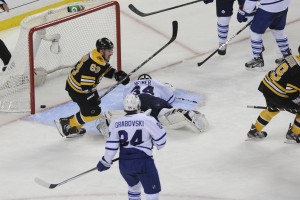 The Maple Leafs blew a three goal lead in the third period to the Bruins in game seven in 2012-13. Credit: Bob DeChiara-USA TODAY Sports)

shortened season, where the team ultimately blew a three goal lead in the third period of game seven to the Boston Bruins. During the 48 game season the team finished fifth in the Eastern Conference with 57 points, which during a full 82 game campaign was a pace of, once again, 97 points.

This special number 97 is also more significant when considering the team has not eclipsed that mark since 2003-04 when the team finished with 103 points, good enough for fourth place in the east. The team ultimately was eliminated from the playoffs in the second round to the Philadelphia Flyers.

This year and the 2012-13 season are the first seasons since the 03-04 campaign where the team has had a goal differential in the positives. Why is this? A combination of two things the Maple Leafs have an offensive weapon that they lacked for years and they have a pretty solid foundation in goaltending, at the same time.

Phil Kessel has 41 points for the team this season, good enough for fifth in the NHL and is on pace for 88 which would eclipse his career high of 82, though his 52 points in 48 games during the 2012-13 season also had him on pace for 88 points. Kessel’s 82 point season is the highest mark for a Maple Leaf since Mats Sundin hit 83 points for the Buds back in 1998-99. 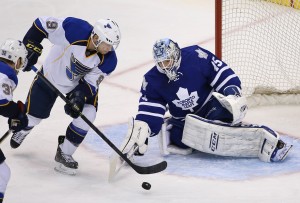 The Maple Leafs have solid goaltending and an offensive weapon at the same time. (Tom Szczerbowski-USA TODAY Sports)

On the goaltending side of things Jonathan Bernier and James Reimer (though he seems to be more inconsistent than his counterpart) have, for the meantime solved their problem in net, something the team struggled to do following the 2004-05 lockout. This year Bernier, who has become the Leafs number one has a goals against average of 2.65 and a save percentage of .921. When the Maple Leafs made the playoffs in 2013, Reimer posted numbers of 2.46 and .924 respectively.

Dating back once again to 2003-04 when Ed Belfour posted a 2.13 and a .918, only once have the Maple Leafs missed the playoffs with a starting goalie whose goals against average is better than Bernier’s 2.65. That year being 2010-11 when Reimer had a 2.60, oddly that year the Maple Leafs highest scorer was Kessel who only put up 64 points. This alludes to the fact that they weren’t getting both great offense and goaltending at the same time.

What to Expect When Expecting

Last season was almost an anomaly in the sense the numbers were pretty good on both sides of the spectrum, but once Bernier sustained the injury that kept him out of the lineup long-term the Leafs slid off the track and never could recover.

Predicting how the Maple Leafs will finish at any given time is like predicting the weather, you might have think you have all the answers, but sometimes it just doesn’t rain. Despite the hills and valleys this season the team as a whole is looking like a much better team than last season and a playoff position is definitely within their grasp. Once again though, it just might come down to whether the Leafs trend of streaking is in the win or the loss column.