ANAHEIM, Calif. — Brayden Point scored 35 seconds into overtime and the Tampa Bay Lightning finished December unbeaten with a 2-1 victory over the Anaheim Ducks on Monday night.

The Lightning — who have won six straight — went 12-0-1 in December and are the eighth NHL team in the last 10 years to finish a calendar month without a regulation loss after playing a minimum of eight games. They go into the new year with a league-high 64 points and have points in 15 straight games (14-0-1).

Nikita Kucherov had a goal and an assist and Andrei Vasilevskiy stopped 35 shots for his 100th NHL victory. 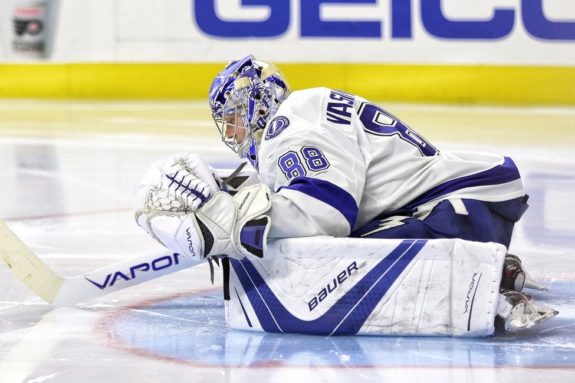 Kucherov and Steven Stamkos are the first set of teammates to combine for 50 or more points in a calendar month since March 2001 when four pairs — three of which were combinations from Pittsburgh — accomplished the feat. Kucherov and Stamkos combined for 23 goals and 28 assists in December.

Kucherov, who has a goal in four straight games, opened the scoring at 6:06 of the first when he finished off a tic-tac-toe passing setup from Erik Cernak and Point with a shot that beat Gibson on his glove side. It was his ninth goal in December.

Ritchie evened it with 2:52 remaining in the period when he got a pass from Ondrej Kase and beat Vasilevskiy from point-blank range.

NOTES: Pittsburgh’s Jaromir Jagr and Mario Lemieux hold the record for most points in a month by a pair of teammates with 59 (27 goals, 32 assists). The others to reach 50 were two other pairs of Penguins — Martin Straka and Jagr (55 points) plus Straka and Lemieux (52) — along with New Jersey’s Petr Sykora and Patrik Elias (50). … Tampa Bay has picked up points in nine straight road games.

Lightning: At the Los Angeles Kings on Thursday night.