TAMPA, Fla. — NHL scoring leader Nikita Kucherov had a goal and an assist to help the Tampa Bay Lightning earn their 50th victory of the season in their 66th game by beating the Ottawa Senators 5-1 on Saturday night, tying the 1995-96 Detroit Red Wings as the fastest teams in NHL history to reach the mark.

The Lightning also got goals from four different defencemen — Victor Hedman, Ryan McDonagh, Erik Cernak and Mikhail Sergachev — and set a franchise record with nine points overall from the defence. 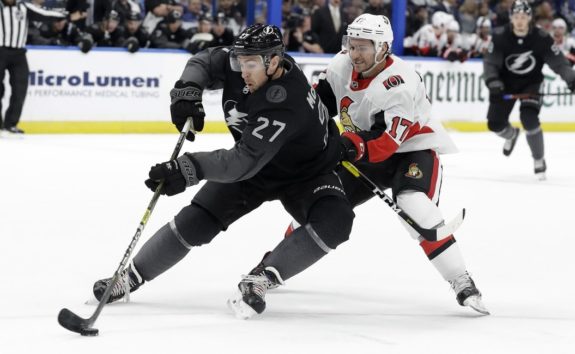 Kucherov reached 75 assists on the season to become the first player since Vancouver’s Henrik Sedin in 2010-11 to record at least that many in a season.

Anthony Duclair scored the lone goal for the Senators, who lost their seventh consecutive game a day after firing coach Guy Boucher and replacing him with Marc Crawford on an interim basis. Craig Anderson finished with 29 saves.

Second-period goals from Cernak and Kucherov, followed by Sergachev’s goal 1:59 in to the third period put the game out of reach as Tampa Bay reached 50 victories for the second consecutive season and third time in franchise history.

Hedman’s ninth of the season off a rebound put Tampa Bay in front 1-0 at 7:17 of the first period.

McDonagh made it 2-0 at 8:51 as Erik Cernak cut down the right boards off a drop pass from Kucherov and found McDonagh on a cross-seam pass to the slot for his seventh of the season.

Ottawa answered that 37 seconds later on Duclair’s 13th of the season, his second in four games since being acquired from Columbus before the trade deadline.

Cernak came off the bench to take a pass from Killorn in the right circle to snap a shot past Anderson at 3:15 of the second period for his third of the season.

Senators: at Florida on Sunday.