One notable fact from the initial 16-person rosters announced this week for the 2016 World Cup of Hockey Tournament to be held in September is that the Tampa Bay Lightning lead all NHL teams with 10 selected players. As the rosters fill out to the maximum of 23 spots, there may be another two or three Lightning players that will represent their countries in the tourney.

That speaks volumes to the entire Lightning organization but especially to Al Murray, Director of Scouting, Coach Jon Cooper and his entire coaching staff and General Manager, Steve Yzerman. Of the 10 players selected from the team, eight of them were either drafted, traded for or signed as a free agent by Yzerman and his staff. Only center Steven Stamkos who will play for Canada and defenseman Victor Hedman playing for Sweden were on the team the day owner, Jeff Vinik hired Yzerman.

Let that sink in a bit. Of the ten players from Tampa announced this week, eight became part of the franchise after Yzerman was hired less than six years ago. So, in a little over five years, he and Murray drafted four of the ten World Cup Lightning players. Yzerman signed two as free agents and one as an undrafted college player. The last of the magnificent ten was obtained through a trade.

With all due respect to Stamkos and Hedman, for this purpose let’s focus on the eight that became Lightning players during the Yzerman era. Here’s a little side note to Jonathan Drouin and his agent, Allen Walsh: Six of the ten World Cup players have been drafted or traded for and developed into very good NHL players by Yzerman, Murray and Cooper and their staffs.

Ben Bishop was traded to the Lightning by the Ottawa Senators for Cory Conacher at the 2013 trade deadline. At the time, Bishop was a backup goalie. Since last season, Bishop has been Tampa’s number one net minder and was selected to represent Team USA. Conacher had impressed in his first season with the Lightning. In 35 games with Tampa during the 2012-13 season, Conacher scored 9 goals and added 15 assists for 24 points. He was a sparkplug of a player and in short time fairly popular with the Lightning faithful. When the trade was announced, many fans in the area were disappointed. 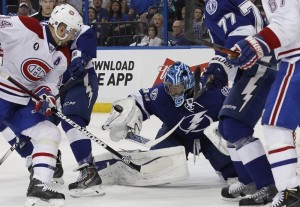 Bishop has shined with the Lightning (Kim Klement-USA TODAY Sports)

Nowadays with Bishop becoming one of the elite goalies in the NHL, most people have forgotten Conacher. Some fans have even forgotten that when he joined the team, Bishop was not named the number one goalie from the get-go. In his first full season with the team in 2013-14 he platooned with Anders Lindback at the beginning of the season before wrestling the top spot about six weeks into the season.

Bishop went on to be a Vezina Trophy finalist that season leading the team to the playoffs for the first time in three years. Last season, he led the team to within two wins of the Stanley Cup. This year he has established himself as one of the league’s best, currently #1 in goals against average. As well as Conacher was received in Tampa, he is not currently in the NHL and the Lightning have one of the best goalies in the league. Thank you, Mr. Yzerman.

Andrei Vasilevskiy was drafted by the Lightning 19th overall in the 2012 NHL entry draft. Scouted and assessed by Murray and his team and signed by Yzerman to his three year entry level deal shortly thereafter. After playing in the KHL for two more seasons, Vasilevskiy began the 2014-15 season with the Lightning’s AHL affiliate, Syracuse Crunch.

Because of the inconsistencies of Evgeni Nabokov, who was Bishop’s backup and waived by the team with three months left in the season, Vasilevskiy saw action in 16 games, posting a record of 7-5-1 during that stretch. His play earned him the role of backup goalie which he holds today. In his second NHL season, he has played in 18 games and holds an 11-5 record including winning his last five in a row and now has been chosen as one of the goalies for Team Russia. There were a lot of NHL teams that did not have a goalie selected on any World Cup team. It says something about their depth between the pipes that the Lightning had both of their goalies chosen.

Half of the Lightning’s ten World Cup selections are forwards from their roster. In addition to Stamkos, there were three draftees in Nikita Kucherov and Vlad Namestnikov who both made the roster for Team Russia and Ondrej Palat selected for Team Czech Republic. These three young forwards were all drafted in the 2011 NHL entry draft. Namestnikov was taken in the first, Kucherov in the second and Palat in the seventh round.

Palat began to make some noise in the league two seasons ago when he was a Calder Trophy finalist. To be named one of the top three rookies in the NHL is by itself an honor but Palat continues to improve his two-way game. Kucherov has begun to come into his own this season as he battles Stamkos for the team lead in goals. Possessing as wicked a wrist shot as there is in the NHL, KUCH as he is called in Amalie Arena is becoming a perennial 30 goal a year scorer.

Namestnikov has taken advantage of increased ice time this season with injuries to Palat and other forwards earlier in the year. He can skate like the wind and handles the puck extremely well. A few weeks ago, he recorded his first career NHL hat trick.

This magnifies the importance of Murray and the entire scouting team for the Lightning as well as the role in the development of these players from 2011 draftees to budding NHL stars to preliminary selections on the 2016 World Cup rosters of their native countries. Cooper and the entire coaching staff deserve recognition for the development of these three. Are you listening, Mr. Drouin? All three were drafted in 2011, all three are under 25 years of age, all three spent time in the AHL before riding a little NHL pine, finding the right line combinations before their talent and skill level earned them critical spots in the Tampa lineup.

The fourth member of the Lightning 2016 World Cup players not named Stamkos is free agent signee, Valtteri Filppula. The center who will represent Team Finland has been an integral and versatile player for Tampa since joining the team prior to the 2013-14 season after playing seven seasons with the Detroit Red Wings. Filppula is usually the third line center but has seen top line minutes as well as being a top penalty killer for the team. He is generally considered one of the best puck handlers on the team.

There were three players from Tampa’s roster of defensemen that were chosen on their respective 2016 World cup lineups. Hedman is the 24 year-old budding superstar and potential Norris Trophy candidate who was drafted by the team as the  #2 overall pick in the 2009 NHL entry draft. That was the year before Yzerman was hired by the team. So, while credit cannot be given to Yzerman for drafting Hedman, much, if not all, of the credit can be given to the team for the development of this star blueliner.

Hedman’s defensive partner on the Lightning lineup may very well turn out to be his partner for Team Sweden in the World Cup, Anton Stralman. The Swedish pair is one of the top defensive duos in the NHL. Signed as a free agent prior to the 2014-15 season, Stralman has won the hearts and minds of Lightning fans with his heady and relentless play on defense. The fact that he adds some offense often at critical times is icing on the cake.

The third Lightning defensive player chosen to represent their country is Andrej Sustr chosen for Team Czech Republic. At 6 feet, 8 inches tall, Sustr is one of the tallest players in the NHL. Signed after his junior year at the University of Omaha-Nebraska, Sustr was undrafted by the league even though he is a coveted right-handed defenseman. His development had more ups and downs than a volatile stock market. As he closes in on 200 NHL games, Sustr has minimized his unforced errors and continues to improve his play, particularly in the defensive zone.

As the rosters for all the 2016 World Cup teams are finalized to get to the maximum of 23 there could be even more Lightning players chosen. Nikita Nesterov has an outside chance at earning a spot as a defenseman for Team Russia. Center Tyler Johnson and forward Ryan Callahan could be chosen to help round out the Team USA roster.

Ultimately, kudos must be directed towards GM Yzerman, Murray, Cooper and their staffs within the Lightning organization. They have worked tirelessly to improve their brand of hockey and in a few months the fans that watch the 2016 World Cup tournament will get a first hand look at what fans in Tampa have seen for the last few years. World class talent on ice.