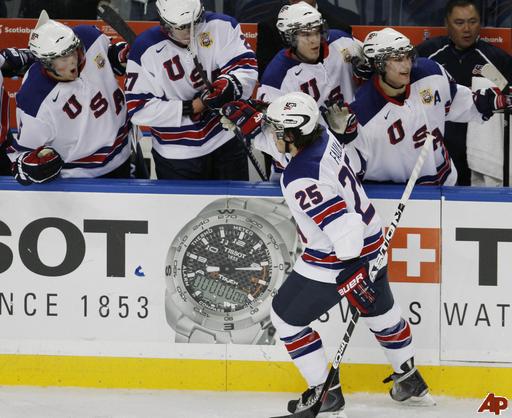 Team USA secured first place in Group B with their 5-4 overtime win against Slovakia yesterday. The victory gave them 17 points in the preliminarily round, one better than the Finns and two more than the rival Russians.

This position means that they will play lower ranked teams in the elimination section that starts tomorrow. Dodging a first round bout with the deadly Swedish squad may prove to be a vital part of the team’s long-term success.

Better yet though, first place means that the Americans would not have to face Team Canada until the gold medal game. If they do have to play Canada, they will at least be guaranteed some sort of hardware to take home.

The United States will play Switzerland in the quarterfinals tomorrow.

With the confidence of being the best in the group, the benefit of facing lower seeded squads, and not having to face the juggernaut Canadians until the championship game, Todd Richards’ team is poised to have a successful run in this year’s IIHF World Championship tournament.

However, their situation does not guarantee them ultimate victory. There are three things that need to happen in order for Team USA to secure their first gold medal since 1933.

Goaltender Connor Hellebuyck has been the best player for the Americans in this tournament. In five starts, he has posted a .942 SV% and a 1.38 GAA, which rank first and second respectively among goaltenders with at least three starts.

He made some spectacular saves in the preliminary round and is a big reason why Team USA was able to win in tight, low-scoring games.

Even those outstanding numbers are a bit skewed due to the four goals the Slovaks scored against him on Tuesday. While allowing that many pucks to go by is typically associated with bad netminding, this was not the case; two markers were off deflections in front of the net while another was scored on a breakaway. He was not to blame for the high-scoring affair.

Hellebuyck has been incredible in goal and has arguably outperformed Vezina Trophy candidate Pekka Rinne at times during this tournament. Him keeping up his stellar play could be a large factor in the Americans going deep into the elimination round.

Comparing Team USA’s penalty kill performance against their power play efficiency is like comparing Saving Private Ryan to a Will Ferrel movie: one is really good while the other is hit and miss.

On one side of the spectrum, the penalty kill unit has been spectacular over the past seven games. In 22 instances of being short-handed, they have only been scored on twice, thus giving them a 90.9% kill rate. Although the sample size is small, it is a strong percentage and is good enough to be ranked fourth in the tournament.

This success can be attributed to the four-man unit denying zone entries and keeping the puck to the outside. Hellebuyck’s play has been a contributor as well. The entire team has bound together to create a defensive group capable of shutting down their opponent’s top shooters.

Less effective, though, is the inconsistent power play that has plagued the men in blue.

Team USA is four for 22 with the man-advantage, which is an 18.2% success rate. While this is not an atrocious number, it puts them eighth among the 16 teams that participated in the tournament. The Americans should be better than that.

And remember, one of those goals was on a five-on-three.

Power plays are critical points in a game that can determine who comes out as the winner. If they want a chance at beating Russia or Finland in the second round, let alone Canada, they need to convert on their opportunities. At the very least, they should put on enough pressure to gain or sustain momentum.

Overall, the defensive corp employed by the Americans has shown that they are a highly skilled group. They have allowed just 14 goals in seven games and demonstrated their ability to win low-scoring contests. This will prove crucial over the next few days.

However, they have slipped up on a number of occasions, resulting in their country losing out on a few points in the standings.

In their two matchups against Belarus and Slovakia, Team USA surrendered a total of nine goals. This is because the defense allowed opposing forwards to get behind them and generate breakaways and odd-man rushes. The netminders did not stand a chance.

Even though Hellebuyck has shown that he can make the big save when he needs to, this is not a skill the United States wants to rely on. Countries like Russia, Sweden, and Canada will exploit holes in defensive coverage and convert on their opportunities.

To avoid giving up a large amount of goals and hoping that the offense can match the opposition, the defenseman need to be tight. Sticks need to be tied up, skaters need to be covered, and pucks need to get out of the zone quickly and efficiently. If they can do that, then they have a quality chance at success.

After being eliminated in the quarter finals in the tournament last year, Team USA has a legitimate chance at making it all the way to the gold medal game. They have done a number of things right, especially when playing against skilled clubs.

As long as Hellebuyck maintains his caliber of play, the special teams get their job done, and the defense pick up their assignments, the United States may win their first gold medal in over 80 years.

Will be shown on NBCSN, along with all other Team USA games