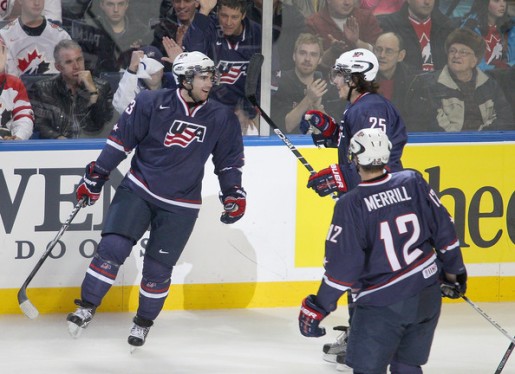 It is almost May, which means it is time to start getting ready for the annual IIHF World Championship tournament. The competition will take place in the cities of Prague and Ostrava in the Czech Republic, and feature 16 national teams battling for the gold medal. This event is sure to bring about incredible highlights and stories over the next three weeks, so you won’t want to miss a game.

Brought to You By…

NBCSN will be showing every Team USA game throughout the tournament so that American audiences may watch their fellow countrymen compete. However, many of the games are at inconvenient times due to the event’s location. That is where we come in.

Throughout the World Championships, myself (California) along with fellow writers Matt Bowen (Illinois), Daniel Mount (New York), Cam Kerry (Massachusetts), and Dustin Luke Nelson (New York) will be bringing you post-game analyses and opinion articles throughout the tournament. We are all passionate USA Hockey fans and will make sure that you are up-to-date on how your country is fairing in the Czech Republic.

Management of Team USA has strived to put together the best squad they can from the players available. Because of the NHL playoffs, a number of big names are not able to represent their nation and participate in the event. But even without some of the top American skaters, the club is packed with talent from an assortment of leagues throughout the world. Here is the roster (courtesy of USA Hockey):

This lineup contains players from the NHL, NCAA, KHL, and the AHL, meaning that this tournament will not only show the talent the United States already has, but the skill that is coming up through the ranks as well. This young and exciting lineup with some unfamiliar names is bound to make headlines starting on Friday morning.

Team USA will enter the tournament ranked sixth by the IIHF after falling in the quarterfinals to the Czech Republic last year. Their journey will begin on Friday, May 1 against the second-seeded Finnish team. From there, they will face the likes of Slovenia, Denmark, and the third-ranked Russian squad before the start of the quarterfinals on May 14. A full schedule of the event can be found here.

The United States will face tough competition in their attempt to win their first gold medal since 1960. The heavy firepower on the Canadian and Russian roster makes the Americans the underdog in this tournament. But as most U.S. hockey fans know: miracles can happen. The game is played by people, not machines.