The Pittsburgh Penguins have become a storied franchise in their rich, 48-year history.

The have put three of the best hockey players in history on the ice in Mario Lemieux, Jaromir Jagr, and Sidney Crosby. They’ve captured three Stanley Cups and now have one of the largest fanbases in all of hockey.

Over those 48 years of Penguin hockey, there have been some remarkable moments which have gone down in the history books. Moments that no Penguin fan could ever forget. In a list of unforgettable Penguin goals, the three aforementioned players dominate it. We could have easily looked at 25 memorable goals, as there are so many unbelievable moments in their history. But, we managed to narrow it down to the best five. So, here they are, the five most memorable Penguins goals in history.

5: Jaromir Jagr Wins It In Overtime to Tie the Series vs. the Devils

In 1990-91, Pittsburgh was able to capture the division title. In the first round of the 1991 NHL playoffs, the New Jersey Devils held a 1-0 series lead over the Penguins. In game two, it went all the way to overtime with the score tied 4-4. That’s when rookie, Jaromir Jagr, came out of his shell and decided to take the team on his back.

On a relatively routine play, Jagr carried the puck through the neutral zone and across the blue line. Skating along the side boards, Jagr had Devils legend, John MacLean, who was coming off of a 45 goal year, draped all over him. He stuck out his arm in an attempt to hold off MacLean, who promptly wrapped both arms around Jagr. He was able to keep his feet moving and dance away from MacLean, before cutting towards the net. With one hand on his stick, Jagr was able to pull the puck back towards the centre of the ice. He patiently stickhandled and waited for Sean Burke to drop to the ice. Jagr was finally able to lift the puck over Burke and score the game winner.

Jagr’s goal tied the series at one and allowed the Penguins to go on to win the series in seven games. They would continue on a tremendous playoff journey before capturing their first ever Stanley Cup against the Minnesota North Stars. If not for Jagr’s goal, Pittsburgh may have had to put their Cup dreams on hold for quite some time.

In 1991-92, Mario Lemieux had one of his many, many outstanding seasons in the NHL. He managed to win the Art Ross Trophy for the most points in the year, with 131, despite only playing 64 games. While the Penguins finished third in their division, they were able to make their second playoff run in as many years.

In the Conference Finals, the Penguins went up against the bid, bad Boston Bruins. Riding on the back of Mario Lemieux and Jaromir Jagr, The Pens were able to outcome the Bruins all series long using their outstanding finesse and smarts. Facing off against a fellow legend in Ray Bourque, Lemieux found himself on a one-on-one situation, with Bourque’s back turned towards him. Lemieux made the uncharacteristic decision to skate directly at Bourque, instead of trying to go around him. By doing this, Lemieux was able to cross up Bourque, who was unable to even turn around to face Lemieux. Instead, Mario put the puck right in between Bourque’s skates and went past him to give himself a free breakaway. 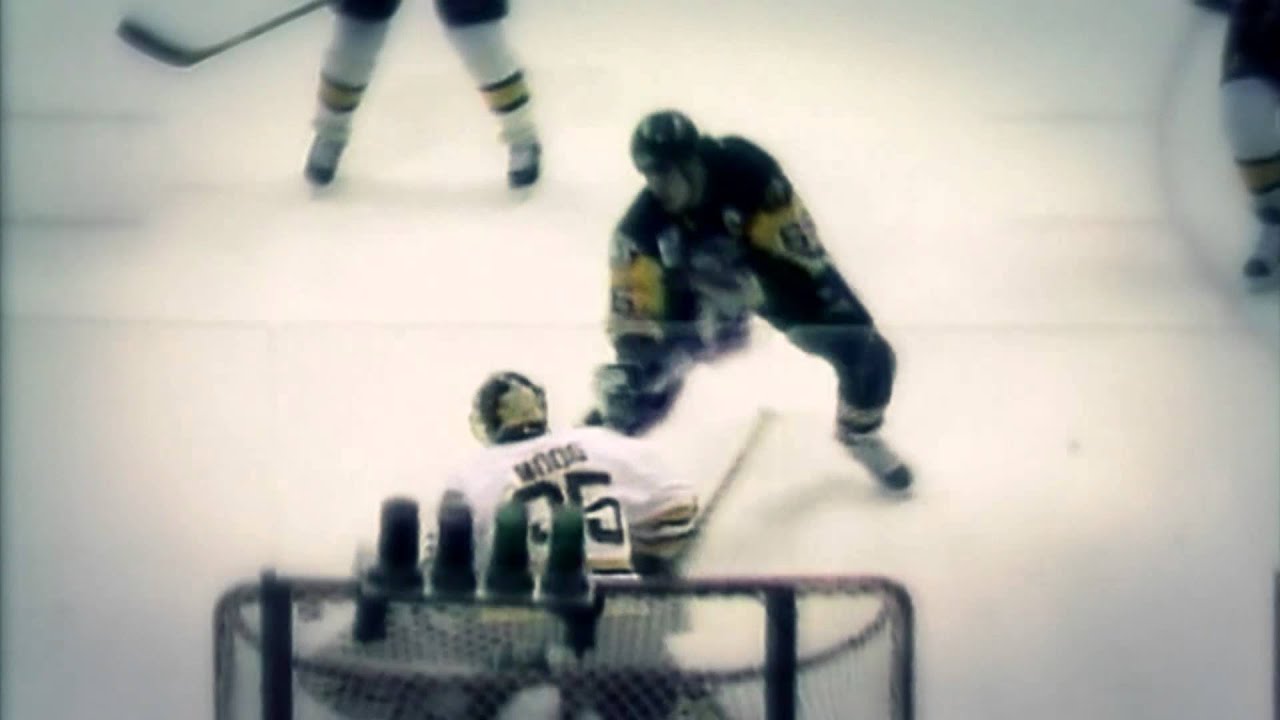 Lemieux was then able to fake a deke before snapping the puck above Andy Moog’s glove to finish off one of the most incredible goals in NHL history. The Penguins were able to sweep the Bruins, and go on to sweep the Chicago Blackhawks as well in the Stanley Cup Finals to win their second ever Stanley Cup, and second consecutive championship.

In the inaugural Winter Classic in 2010, Sid’s Penguins faced off against the Buffalo Sabres. The day was supposed to bring back memories of playing on the pond in the harsh winters, and boy, did it ever. They played through almost blizzard conditions, with snow constantly piling up on the ice. Snow crews were called upon to shovel the rink at each whistle during the time of the worst conditions.

Despite terrible conditions that made it tough to move the puck, and even tougher for goaltenders to keep an eye on it, the game remained a very entertaining one. With the score tied 1-1 going into the shootout, the shots were 37-25 in favour of the Sabres. Then, up came Sidney Crosby with a chance to win the game. He had to push the puck from center ice all the way to the hash marks through thick snow, just making sure to not let the snow push it off his blade. Once he reached the face-off circle, he hit a clean watch that had been recently cleaned. Once he was there, Crosby began to dangle back and forth in front of Ryan Miller before opening up his five-hole and sliding the puck through. 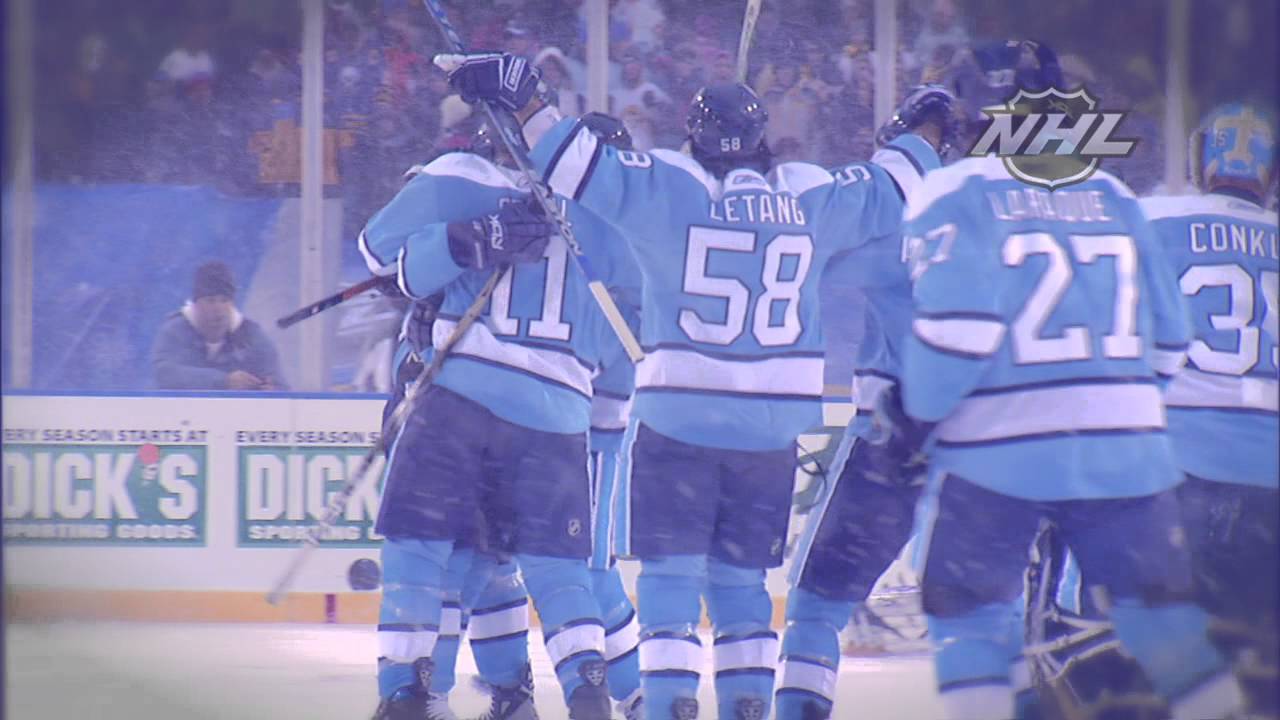 Crosby capped off the Winter Classic better than Gary Bettman could have written it himself. The poster child for the league was able to win the game in fancy fashion and kickstart a very successful annual outdoor game, which has become a key component of each NHL season.

In the 1992 Stanley Cup Final, the Pittsburgh Penguins were facing off against the Chicago Blackhawks, looking to defend their championship from 1990-91. In the all important first game of the series, the Blackhawks ad been shutting down the Penguins with a trap style play which didn’t allow Pittsburgh to enter the offensive zone with nay success. As a result, the Blackhawks held a commanding 4-1 lead just midway through the second frame.

After goals by Rick Tocchet and Mario Lemieux cut the lead to just one, Pittsburgh had regained momentum and control of the contest. Then, Jaromir Jagr decided to put the fate of the game in his own hands. As he controlled the puck at Chicago’s blue line, he danced around one Blackhawk which ad forced him towards the side boards. That’s when Brent Sutter rushed him, thinking he would have no time to react. Well, Jagr balanced himself before slipping the puck between Sutter’s legs and sidestepping his bodycheck. Then, he was able to get the puck back before dragging it around another defender which set himself up between the circles. He then controlled the puck on his backhand before rifling a shot five-hole on Ed Belfour to tie the game at four a piece.

Later on, the Penguins would score a final goal with just 13 seconds left in the game to lift the roof off of the “Igloo”, assuring them a game one win. Without Jagr’s goal, Pittsburgh would very likely have been forced to empty their net being one goal down, ultimately losing the crucial game. It is arguable that Jagr’s goal had an extremely significant impact on the Penguins winning their second Stanley Cup in as many years.

1: Mario Lemieux Splits the D on Breakaway against MNS

Back to the 1991 Stanley Cup Final for the most memorable goal in Penguins history. Heck, it’s become one of the most memorable goals in NHL history and is a staple in Hockey Night in Canada’s opening segment each night. It was game two of the finals, against the Minnesota North Stars, who held a 1-0 series lead.

With the Penguins leading by a score of 2-1 in the game, Super Mario was able to put the game out of reach. After a Minnesota scoring chance, Pittsburgh broke out the puck to a flying Lemieux who drove towards two defenders at the offensive blue line. He put the puck on his backhand, which forced Shawn Chambers to bite. Lemieux was able to then slide the puck under Chambers’ stick and between his legs. As he turned around to find the puck, Chambers tripped over his own feet, and Lemieux was able to skate right between the two defencemen towards the net. He then faked a shot which Jon Casey reacted to with a poke check. Lemieux went to his backhand and slide the puck in the open net before falling into the post. The goal gave Pittsburgh a 3-1 lead and stole any hope the North Stars had of a comeback.

The Penguins would tack on one more and win the game 4-1, tying the series at one. In the end, Pittsburgh would take the series 4-2, on route to their first ever Stanley Cup. Without Lemieux’s goal, who knows if Minnesota would’ve been able to tie that game. Lemieux would be rewards with the Conn Smythe Trophy, as the playoff MVP, with 16 goals and 44 points in just 23 games.

Which goal do you think is the most memorable in Pittsburgh Penguins history?

Let us know in the comments below!