The NHL’s Western Conference is going to be difficult to accurately predict this season. But perhaps that should be no surprise. Last season, the difference between most of the Western teams was the smallest it has been in a long time. I looked at three metrics covering the past half-dozen 82 game seasons. In each case, it shows the gaps between the teams has tightened.

In the prior five years, that average gap was 21 points between the playoff team that had the fewest points and the team with most points. The smallest gap was 16 points and the highest was 26 points. This past year, that gap was just 12 points as shown in the chart below. 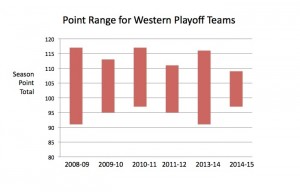 But to show the depth in the West, one needs to look further down the standings. In this case, I cut off at the 3rd team from the bottom. The difference between the top point team in the West and the team with the 3rd lowest point total is much lower this past year than in recent years.

In the prior five years, that average gap was 33 points, with the smallest gap at 29 points and the highest gap at 38 points. This past year, that gap was just 20 points, shown in chart below. 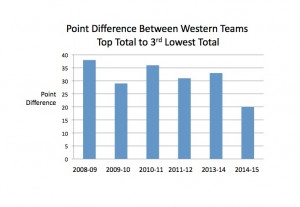 Lastly, I looked at the 3rd lowest point total among teams in the West team to determine if the lower tier teams were becoming more competitive. The results are clear, the lesser teams were more competitive. In the past 5 years, the team 3rd from the bottom earned between 79 and 84 points. Last year, that jumped to 89 points as the chart shows. Those additional points likely came at the expense of the top teams, as for the first time in over a decade, no Western team reached 110 teams points. 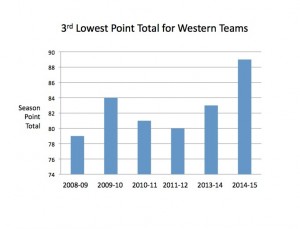 In each chart, I excluded the results from the 48 game season in 2013. Scaling suggests that fewer games should mean smaller absolute ranges between the top teams and the lower teams. But the ranges for the just-completed season were even smaller than the ranges for the 2013 season — which was barely half as long.

It’s a clear picture, the bottom teams got better and the top teams were a bit less dominant. So the gap between the teams shrunk. The question is, will this change for this upcoming season? The answer is likely to be ‘no’.

It Is Getting Tighter

The Kings added Milan Lucic, and are no longer coming off a short postseason. The Sharks added solid veterans Paul Martin and Joel Ward. The Stars, who finished strong last year, added Patrick Sharp, Antti Niemi and Johnny Oduya. Though Colorado sent talented forward Ryan O’Reilly to Buffalo, they have several younger players that are on the upswing: Nate McKinnon, Matt Duchene, Gabriel Landeskog, Tyson Barrie and Semyon Varlamov among them. Colorado will be no pushover. All four of these teams are legit contenders for a playoff spot.

That leaves the two teams that finished well back of the pack: Edmonton and Arizona.

Edmonton is the consensus candidate for NHL’s ‘most improved’ team this year. On paper, the Oilers seem to have improved more than anyone. They added a potential goalie solution in Cam Talbot, the most sought after prospect in a decade, Conor McDavid, and a well-respected coach in Todd McLellan. It would surprise very few people if better coaching leads to better all-around play from younger players like Ryan Nugent-Hopkins, Taylor Hall, Jordan Eberle, Nail Yakupov and Oscar Klefbom. Even the introduction of 3-on-3 overtime hockey figures to give the agile Oilers an edge. With better coaching, better goaltending, better player development and the addition of a generational talent, Edmonton appears poised to take a major leap forward.

Of the Western teams that missed the playoffs last season, only Arizona has little chance to make the playoffs this coming season.

Since five teams that missed the postseason last year are legit playoff contenders this year, it begs a question: which teams that made the 2015 playoffs might find themselves out of the picture come April 2016? The short answer, all eight who made the playoffs last year look to be playoff capable teams again this coming season.

Minnesota, Winnipeg and Calgary are young and on the upswing. St. Louis, Nashville, Anaheim and Chicago all forecast to be strong again. It might be the reigning champs, the Blackhawks, that took the largest step back. But counting out the Blackhawks is a fool’s errand. Vancouver may be the most vulnerable among the playoff teams for a step back, but a healthy full season from Ryan Miller (29-15-1 in goal last year) can help the Canucks stay competitive.

The West has no clear favorite. There are very good teams, but no team that screams greatness. It’s possible a team like Calgary emerges and dominates. They had a strong season last year and perhaps the best offseason acquisition of any team for help this season, with their addition of Dougie Hamilton. But more likely, this season will again be close from the top almost all the way to the bottom. Thirteen of the fourteen Western teams look competitive. Only eight will make it to the playoffs. Setting up this regular season to be the wildest one the West has seen in many years.