In 1909, the reigning pro hockey league was the Eastern Canada Hockey Association,  supposedly amateur but with players who were getting paid.  Their annual meeting was held in the Windsor Hotel, November 25th, and all four clubs were fully represented: the Quebec Bulldogs, the Ottawa Senators, the Montreal Shamrocks and the Wanderers, also from Montreal. NHL Hockey was still in the distant future. 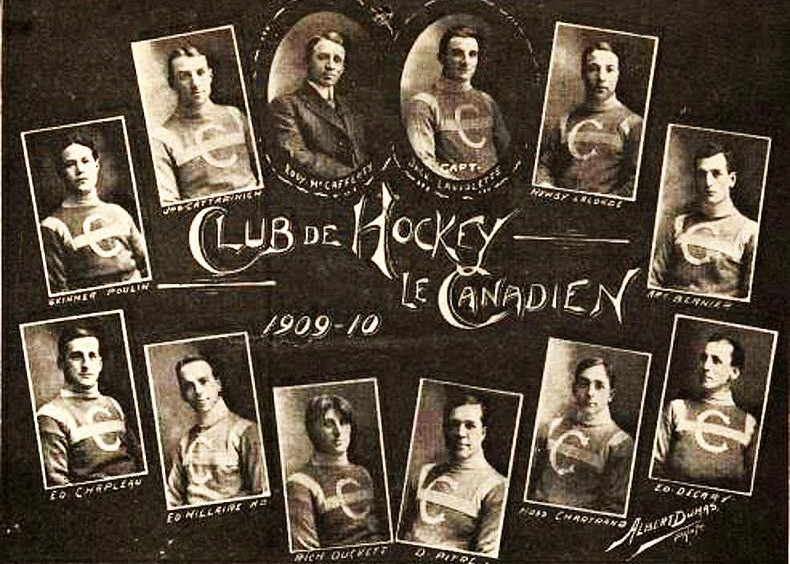 Before the Canadiens: The Wanderers

The Montreal Wanderers were a powerhouse club under the feisty direction of general manager Jimmy Gardner.   Their new owner, James Doran, had built the Jubilee Arena (capacity 3500), on Ste. Catherine Street East, two miles east of Boulevard Saint Laurent – the dividing line between English and French Montreal – and was insisting that his team would play their home games there. 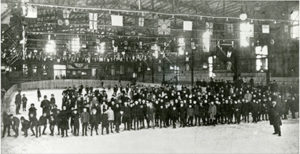 The Ottawa team demanded that the Wanderers make  their home base the Westmount Arena, one mile west of Saint Laurent, since it had double the capacity, better facilities and a much larger, heated foyer where the visiting Ottawa fans could wait in warmth and comfort for the gates to open after the train trip in to see their team play.  The argument grew in volume and in fury.  In a pre-arranged plan the three opposing clubs disbanded the ECHA in front of Gardner’s eyes and formed a new league: the Canadian Hockey Association (CHA), leaving the Wanderers out in the cold.

The Birth of the NHL 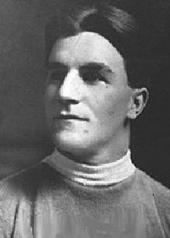 Gardner and his crew stormed out of the room and through the lobby of the hotel where they were intercepted by J. Ambrose O’Brien, a wealthy dairyman from Renfrew who had made the trip into Montreal to seek a spot in the ECHA for his own hockey club, The Renfrew Creamery Kings.  Gardner calmed down enough to greet O’Brien and over drinks suggested they form a new professional league with Haileybury, Cobalt, Renfrew, the Wanderers and a new team they would create called Le Canadien to represent the French speaking population of Montreal. They called the new league “The National Hockey Association of Canada,” the predecessor of NHL hockey.

Days later after cementing the agreement of the participating teams, the group announced their plans to the press, including the hiring of Jack Laviolette to manage and play on the new team, and the deposit of five thousand dollars in a Montreal bank account by Mr. O’Brien to guarantee the salaries of the players.  All teams in the new league agreed to give Laviolette thirty interference-free days to sign any French-speaking player he could.

The press was skeptical and wondered out loud how a city the size of Montreal could be expected to support five professional hockey teams.  The owners declared:  “Skepticism be damned. Let the games begin!”

Laviolette immediately went after two experienced, outstanding players, Didier Pitre and Newsy Lalonde – the future NHL hockey star.  Joe Cattarinich a well-known lacrosse player signed on to tend goal.  Rounding out the team were forwards George Poulin, Ed Decarie and Art Bernier.  By the rules of the day, each team dressed only seven players who played the entire game with no substitutions.  The Canadiens were formed and ready to play.

Their first game was played January 5, 1910 against the Cobalt Silver Kings at the Jubilee Arena in East End Montreal.  The Canadiens took the ice wearing dark blue sweaters, with a narrow white band in the middle and an egg-shaped “C” on their chests, sporting fire engine red pants.  A furious contest, with end-to-end rushes all night long, it ended up after three regulation periods in a 6-all tie.  As the band played “God Save the King” and the crowd poured out of the building, the officials on the ice declared the game would be decided in overtime.  At five minutes twenty-five seconds of the overtime Poulin scored the winning goal giving the new team its 7-6 maiden victory that received rave reviews in the next day’s press.

So…  thanks to an ambitious dairyman from Renfrew, Ontario, a revenge-bent general manager from the Wanderers and the strong-willed persuasion of their fiery first coach the Canadiens were born.

One hundred years later, on January 5, 2010, the Montreal Canadiens NHL Hockey club hosted the Washington Capitals in a game that commemorated that opening night.  One hundred years of action, ecstasy, agony, despair, pure joy, unlimited thrills but above all full-out hero worship.

This article was originally published in January, 2010.

Sabres’ Jack Quinn Is a Surprise Addition to the Taxi Squad

Penguins Need More Out of Evgeni Malkin and Kris Letang