A bizarre and unpredictable run by the 8th-seeded Oilers was culminated with a 7-game defeat to the Carolina Hurricanes, who became North Carolina’s first major pro sports team to win a title. The series is recognized for ear shattering crowds in both arenas, the cause of Fernando Pisani’s ridiculous contract with his fine play, and for a Game One gaffe by Edmonton goaltender Ty Conklin (replacing Dwayne Roloson, injured in that same game), when he played a puck right onto the stick of Canes captain Rod Brind’Amour in the dying seconds of a tie game.

Nobody gave Montreal any credit coming into this series, and even after surprising critics with a Game One OT win, the Habs still found themselves down 3-1 after four games. Montreal goalie Jaroslav Halak took over, allowing just three Washington goals the rest of the way, on 130 Capital shots. After dispatching one of the top two NHL stars in Alexander Ovechkin, the Habs would go on to eliminate Sidney Crosby’s Penguins in the second round.

Rivalries are made in the playoffs, and after three years of the Leafs eliminating their provincial rival Senators, they met for a fourth consecutive year. After a terrible effort in Game Five, Ottawa captain Daniel Alfredsson guaranteed a Senators win in Game Six. Mike Fisher scored in double OT at home in one of the franchise’s finest moments, sending the series to the Air Canada Centre for Game Seven. Unfortunately for Ottawa, they could not recover from two bad first period goals from goaltender Patrick Lalime, and the Leafs won their fourth straight series against the Senators. They have not won a playoff series since.

Anaheim goalie JS Giguere fully earned the Conn Smythe Trophy with his play to send the Mighty Ducks to the Finals after losing just two games in the first three rounds. But he ran into future Hall of Fame goalie Martin Brodeur. The home teams won each game in the series, but Game Six was when the series came alive. After being knocked out on the ice by Scott Stevens, Duck legend Paul Kariya came out on his next shift and fired a slapshot past Brodeur, the eventual winning goal. A less likely hero, Michael Rupp, would score two goals in a Game Seven 3-0 shutout, giving the Devils their third Stanley Cup.

On their way to his first Stanley Cup, Sidney Crosby ran into his rival Alexander Ovechkin in the first playoff series between the two. Both superstars scored eight goals in the series, with the most memorable game being Game Two, when the players traded hat tricks in a 4-3 Capital victory. Unfortunately, the series ended anti-climatically, with Washington goalie Simeon Varlamov laying an egg in the seventh game as Pittsburgh cruised to a 6-2 win on the road.

The one series on this list to not go the full seven games, this one is on the list based on the pure interest the series received, as well for the two high-powered offenses going at it. The teams combined for 47 goals, the most in any series since 1980. There were two overtime finishes, one being Patrick Kane’s soft shot along the ice which eluded Philly goaltender Michael Leighton, as well as hockey commentators everywhere, with nobody seeming to notice the puck went in the net.

In Game Six of this meeting between hockey’s greatest rivals during the late 90s-early 00s, with Colorado up 3-2 in games, there was no score in the dying seconds of the first period. Avalanche goalie Patrick Roy made a great glove save off of Steve Yzerman, but he lifted his hand up to show everybody the puck. In what is known as the ‘Statue of Liberty’ goal, the puck fell out of his glove and Brendan Shanahan tucked it away, giving Detroit a 1-0 lead. They would win the game 2-0, and dismantle the Avalanche in Game Seven by a 7-0 score.

The Flyers would become the third NHL team to rebound from an 0-3 series deficit. After a lacklustre performance in Game Three, Flyer fans were trying to give away their tickets to Game Four. But that game turned it all around. Simon Gagne, who missed the first round due to injury, scored in Game Four overtime, and Philly took Game Five on Boston ice, won a close 2-1 decision at home in Game Six, and then rallied from a 3-0 game score in the seventh game, again, with Simon Gagne providing late heroics.

This series had it all. Lightning captain Vincent Lecavalier and Calgary captain Jarome Iginla fought in Game Three. Lecavalier responded by checking Flame forward Ville Niemenen from behind in the next game, seeing a suspension. The Flames, Canada’s first team in the Finals since 1994, took Game Five in overtime and had a chance to win at home in a Game Six that went to triple overtime. Former Flame Martin St. Louis scored on a bad angle to beat Mikka Kiprusoff, sending the series back to Tampa Bay. In Game Seven, Lecavalier put together one of the finest assists in Stanley Cup history, setting up Ruslan Fedotenko for the winning goal in the last hockey game before the lockout.

If, for nothing else, all this series gave us was the image of Joe Sakic handing Ray Bourque the Stanley Cup, and the eventual Hall of Famer lifting it into the air for the first time, then so be it, it’s Number One on the list. The fact that this happened after a hard-fought seven game series between the two best goaltenders of the era in Patrick Roy and Martin Brodeur. Roy won his third Conn Smythe Trophy, who rebounded with a puck handling gaffe in Game Five. Alex Tanguay scored two huge goals in Game Seven, along with one of the finest wrist shots coming from the stick of Joe Sakic. 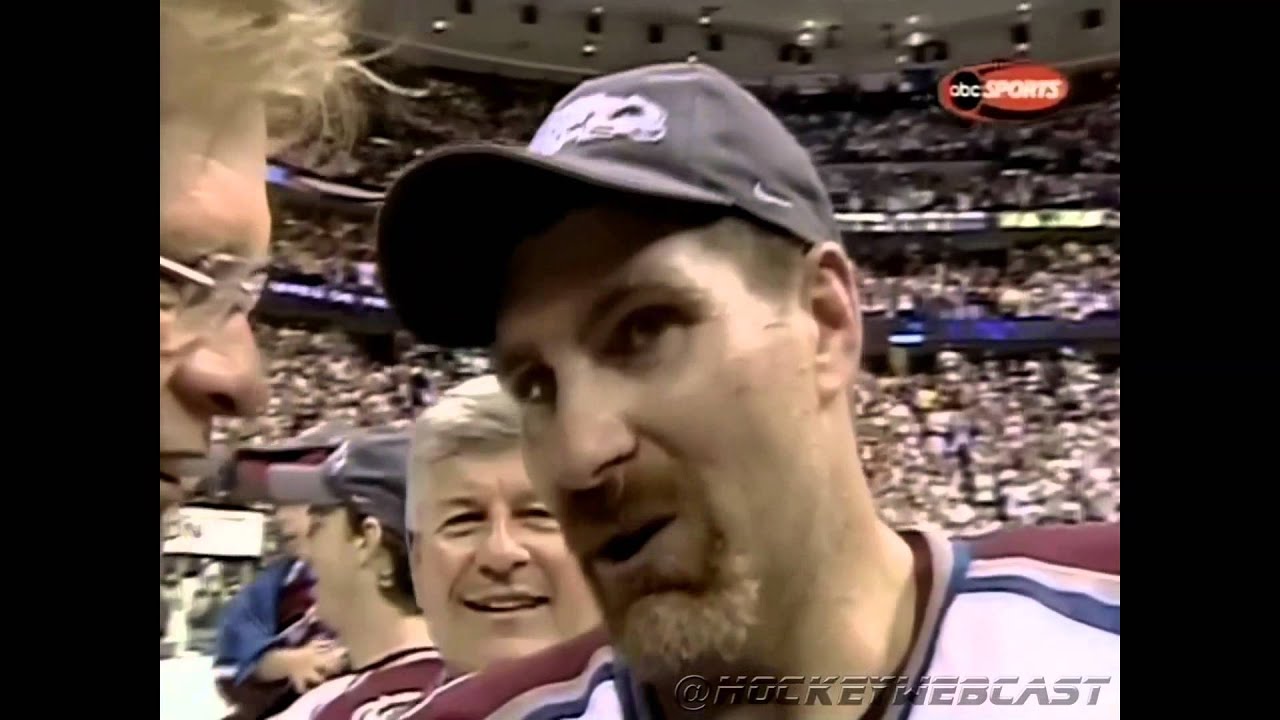 Born in Vancouver, Cam works as a freelance writer out of Kamloops, BC and now writes for SB Nation’s Nucks Misconduct.