After the Detroit Red Wings clinched their 23rd consecutive postseason berth, the focus quickly shifted to how much damage they could do in the playoffs. ESPN’s Craig Custance went as far as to rank the Wings as the most dangerous wildcard team. Through four games, the Bruins hold a 3-1 series lead, but that doesn’t tell the full story. The Wings have done a decent job hanging with the Bruins, but there have been periods of time where the Bruins talent completely takes over. Some are amazed by how competitive Detroit has been while others are amazed at how Boston has been able to raise their level at critical points of the games. All of this is a result of the chess match between the two coaches, Claude Julien for Boston and Mike Babcock for Detroit.

Just two months ago, these two men were working together to guide Team Canada to a second consecutive gold medal in the 2014 Winter Olympics. They’ve spent a significant amount of time working with each other and have a high degree of mutual respect for each other. This has led to a highly entertaining chess match that has gone back and forth throughout the series. It has been highly enjoyable for all those watching.

In the first game, the Red Wings surprised the Bruins with their speed. The Wings were building up steam through the neutral zone, chipping the puck in deep and then blowing past the defensemen to retrieve the puck. Here are a series of images depicting a typical zone breakout in Game 1. 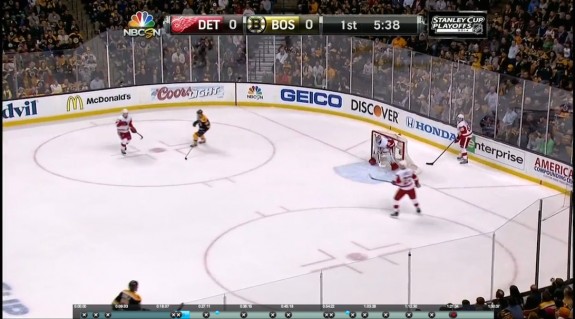 In the first image here, you can see Red Wings’ defenseman Danny DeKeyser setting up behind the net to evaluate the play in front of him. 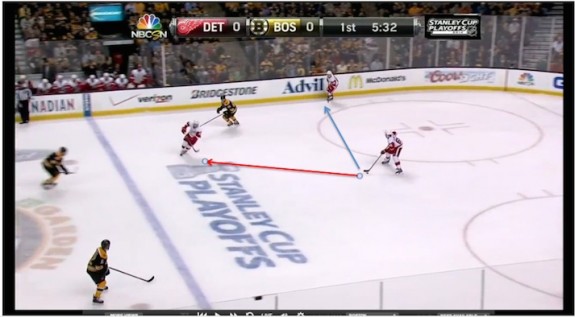 Here we can see that DeKeyser has skated the puck up middle of the ice and that Boston is playing a 1-2-2 forecheck. By skating up the ice and having two forwards come up the ice, DeKeyser is forcing the two forwards to make a decision as to who they are going to take and how much ice they will give up. At the same time, DeKeyser has two options here as he can pass to Riley Sheahan cutting through the middle of the ice (red line) or he can pass to Gustav Nyquist who has built up steam and is flying up the boards. In reality, DeKeyser dishes to Nyquist. 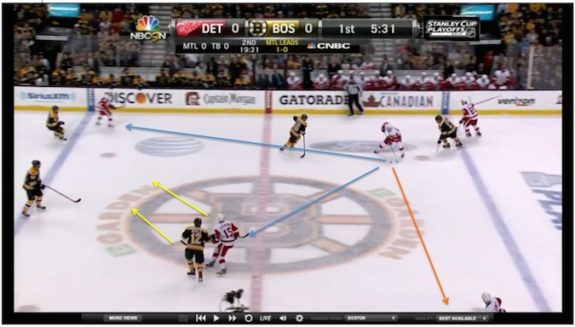 This next sequence is a little more complex. Nyquist has the puck and has come off the boards and into the middle of the ice while DeKeyser has circled back behind him. At this point in time, Nyquist has used his speed to get past one forward and has enough speed built up to beat the second forward. Also, by coming off the boards and across the ice, he is reversing the flow of the play, causing the Bruins players to change directions, something that is exceptionally difficult to do at top speed. Nyquist has three passing options on this play as well. He can step around the forward in front of him and throw a pass along the right-side boards. He can shuttle a pass into the middle of the ice to Sheahan, or he can zip a pass to the pinching defenseman, Kyle Quincey. Nyquist decides to dish to Quincey. 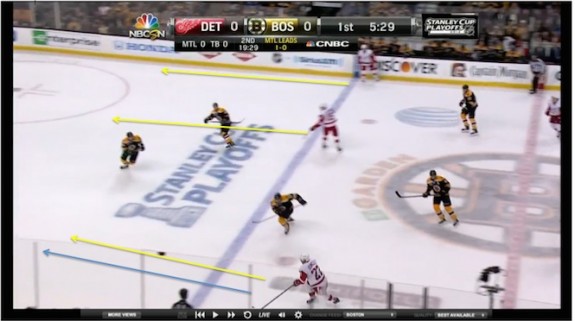 The simple pass across the ice by Nyquist forces all the Bruins players to switch direction, giving Quincey ample time to get up the ice. At this point in time, Quincey can either shoot the puck around the boards where the Wings have an odd-man advantage in the corner, or he can simply skate the puck into the zone. This fast and simple breakout gave the Bruins fits in Game 1 and ultimately resulted in the only win of the series for Detroit.

The second game saw Detroit have very few clean breakouts like the one shown above. Instead, Boston forced Detroit to play along the boards, forcing the Wings to play physical. After the Wings recovered the puck, the Bruins would shift to a relentless forecheck that prevented Detroit from setting up and building up speed. At the same time, Boston sent more men to the front of the net as they noticed that Jimmy Howard was giving up a lot of rebounds in the first game. This led to Boston scoring two quick goals in the first period. The Wings made an adjustment in the second period to counter this aggressive forecheck. Check out this image from a breakout in the second period of Game 2. 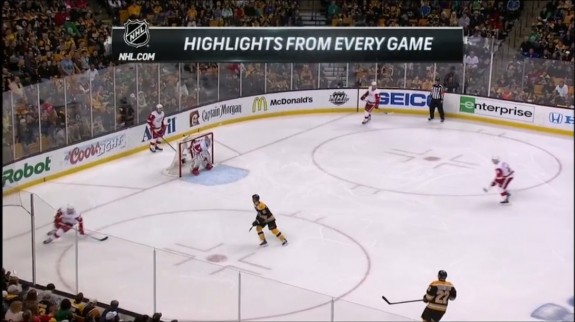 In this image you can see how the lead forward in the Bruins’ 1-2-2 forecheck is cheating towards the side where the forward is circling to build up speed. You can also see the second forward cheating into the zone to take away any of the short and simple passes. To counter this, the Wings started to station a forward at Boston’s blue line which leaves the neutral zone open. This allows the pass to be completed and it immediately puts the Bruins’ D on their heels. This strategy worked for the rest of Game 2 as the Wings outshot Boston 25-11 after the first period, but the Wings were unable to pull out a victory.

Game 3 was not so much about the coaching as it was a complete self-destruction by Detroit. Boston’s forecheck forced mistake after mistake which led to numerous odd-man rushes. The Wings were playing too fast and Boston just let the game come to them. Game 4 saw Detroit play a much better game, but unfortunately they broke down in overtime and allowed wave after wave of offensive chances. The insertion of Todd Bertuzzi and the return of Henrik Zetterberg were key for the powerplay as the Wings finally scored a powerplay goal, but in the end, the Bruins depth overwhelmed them. Julien was extremely smart to continue to roll four lines in the third period while Babcock shortened his bench. When the game switched to overtime, guys like Carl Soderberg, Shawn Thornton, and Gregory Campbell wreaked havoc because they had the fresher legs.

The Wings are facing elimination and need to make changes immediately. The story of the series has been Boston’s powerplay and forecheck. Boston’s forecheck has been so effective and the Wings have been turning the puck over right outside of their own blueline far too frequently. With the man advantage, Boston is 4/10 and almost 20% of their total shots for the series are from the powerplay. Even more impressive is that Boston has generated 37 shot attempts in 13.9 minutes of powerplay time, a rate of 2.66 shot attempts/powerplay minute, by far the highest rate of all teams in the postseason. One of the things the Wings love to do on the penalty kill is have their forwards be aggressive against the defensemen. They like to pressure the points in hopes of forcing rushed decisions. However, Boston’s defense is far too experienced for this. Boston is making a short pass to a player who is on the half-boards. That player then turns immediately to the middle of the ice because that ice is wide open. The Wings may be better advised to play a tighter box when down a man. Obviously the Wings don’t want Chara, Hamilton, and Boychuk unleashing bomb after bomb from the point, but they have to tighten up their coverage from the half-boards down and it starts with a tighter box on the penalty kill. 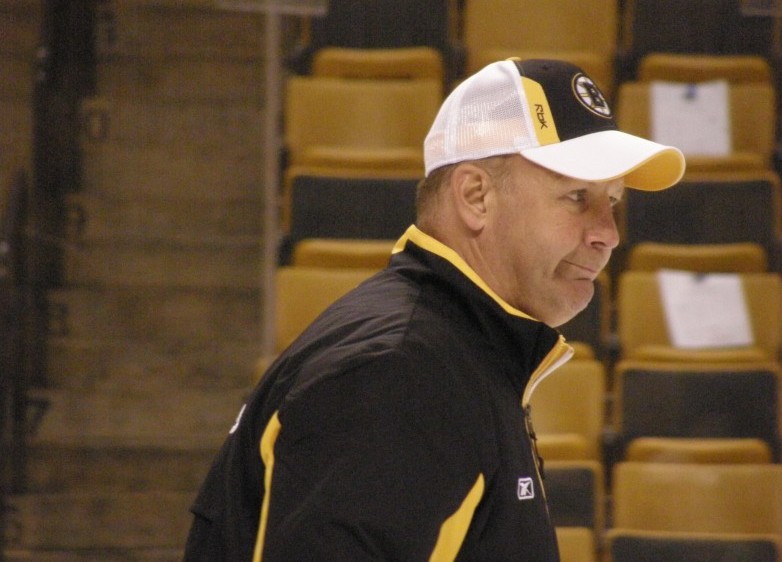 In terms of Boston’s forecheck, the aggressive 1-2-2 has been a problem for Detroit. The Wings have tried the short passes to players flying up the wing and Boston took that away. Detroit tried long stretch passes to back up the forecheckers, but Boston has adjusted. The change will start with Detroit’s support. Boston has forced Detroit to engage in board play in their own zone, so Detroit has to do a better job of supporting the players in the board play. As soon as the puck comes out of the scrum, the player with the puck has to have two options to pass, one to the center of the ice and the other further along the boards. The short quick passes out of the zone will not allow Boston to set up their vaunted forecheck and it will allow Detroit to use their speed.

This series has been an exceptional chess match between two highly talented coaches, but the checkmate has yet to be obtained. While Boston is in the driver’s seat, the games have been close and competitive. If Detroit can adjust their penalty killing tactics to a tighter box and provide more support to their players engaged in the board scrums, the Wings will have a fighting chance of getting back into the series.