The day that we have all been waiting for has finally arrived.  It is draft lottery Saturday.  It is the day we all find out which team gets the honor of picking 1st in this June’s draft.  In other words, we will learn where Connor McDavid will make his home.

Buffalo currently sits with the highest odds of winning the top pick, at 20%.  Though they have the best odds, there is still an 80% chance that they will pick 2nd.  Given the results of lottery in past years, numbers suggest someone will move up to the top spot.

This lottery marks the 21st season of its existence.  The lottery has evolved from its origin.  From its debut in 1995, until 2012, whoever won the lottery could move no higher than 4 spots up.  Therefore, only those teams in the top 5 could pick 1st.  However in 2013, the lottery was made so that anyone had a chance to win the top overall pick. 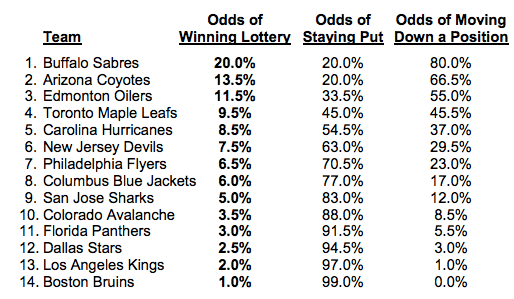 Memorable Moments From The Lottery

In the 1st lottery, the Ottawa Senators finished with the worst record.  But when the results were revealed, the Los Angeles Kings ended up the victors.  But because they were in the 7th spot, they could move up 4 spots.  They selected 3rd, and picked Aki Berg.  Ottawa maintained the top spot, and selected Bryan Berard.

In 1998, the Tampa Bay Lightning held the league’s worst record.  On draft lottery night, the ping-pong balls fell in the favor of the San Jose Sharks.  But, thanks to the Bryan Marchment/Andrei Nazarov trade between the Sharks and Lightning, Tampa Bay had the right to switch 1st round picks with the Sharks.  They exercised their option.  The Lightning drafted Vincent Lecavalier.  In 2004, the Lightning won the Cup.

And who could forget 2005, the Sidney Crosby lottery?  The work stoppage wiped out the previous season.  As a result, all 30 teams were entered into the lottery.  The Pittsburgh Penguins came out victorious, and the rest is history.

In the previous 20 seasons, the team with the worst record won the lottery a total of 6 times.  If we exclude the Crosby lottery, the worst team won 31.6% of the time.

The last team to finish last and win the lottery, the Edmonton Oilers.  It has been 5 years now since it has happened.  That year, the Oilers selected Taylor Hall.  The Oilers got to pick 1st 3 years in a row from 2010-2012, but didn’t win the lottery every year.  In 2011, the New Jersey Devils won, but could only move up 4 spots.

The lottery consists of 14 balls.  Of the 14 balls, 4 are chosen at random.  There are 1,001 possible outcomes as a result.  The Lottery Simulator has the combinations listed for each team here.  The winner is determined by the 4 chosen balls, and matching them with the master list.

The lottery has had its share of moments in 20 seasons.  This year’s might be the most memorable yet.  One franchise is going to have a historic night.  Who will it be?  Only the lottery balls know.