The Pittsburgh Penguins have made quite a few of big moves during this offseason in an effort to improve their forward depth. To say the least, on paper, general manager Jim Rutherford and his staff has done a great job. The 2015-16 Penguins look to have the deepest group of forwards we’ve seen in a long time, and they might be the best in the metropolitan division as well.

During the playoffs last season the Penguins were having an uncharacteristic problem, scoring goals. So Pittsburgh sent out Brandon Sutter, Kasperi Kapanen, Scott Harrington and some other pieces to return Phil Kessel, Eric Fehr, Nick Bonino and some other prospects. We know that the forwards should not have trouble scoring come playoff time this season and goaltender Marc-Andre Fleury is coming off one of his strongest seasons to date, but there’s a problem.

How have the Penguins allocated so much of their salary cap to their forwards? They’re going very cheap on defense this season. Kris Letang is obviously the highest paid player on the Penguins blueline at $7.25 million, Rob Scuderi, who might not be in the lineup, comes next at $3.375 million, then it drops to Ian Cole at $2.1 million, Ben Lovejoy is only making $1.1 million and the rest of the players are on entry-level contracts.

So what will the starting blueline look like in just 71 days? Assuming that the Penguins create a lineup based on who deserves to play and not veteran status or salary here’s what we’re looking at for 2015-16.

Rob Scuderi would be the healthy scratch in this scenario.

On paper, it’s not a bad blue line, but there are quite a few reasons to be concerned heading into the season. And let’s start with the obvious, three of the projected top four defenders have, or have had, some serious injury issues throughout the years. Letang is the most severe case, as he’s suffered numerous concussions, countless lower-body injuries and a stroke. Throughout his nine-year career Letang has played all 82 games just once. Shifting to the other top defender, Maatta, he’s been an outstanding young defender that no one saw coming, but he’s coming off a scary year. Last season Maatta had a cancerous tumor removed and was forced to miss the remainder of the season with shoulder surgery. Then there’s the other young defender, Pouliot, who has his own shoulder problems and has just 34 NHL games under his belt. 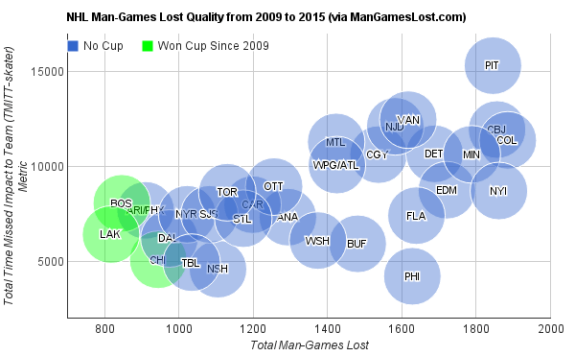 The rest of the defensive corps have been fairly durable, but injuries aren’t the only reason to be concerned. As I just mentioned, Pouliot has a total of 34 games played in his career, Dumoulin has 14, Maatta has 98 Cole has 187 over five seasons, Lovejoy has 268 over eight seasons and Letang is the most experienced with 491.

There’s a huge gap in experience between Letang and Dumoulin. In other words, prepare for a lot of growing pains early in the season, which isn’t a problem. As long as the Penguins make the playoffs, they have a chance to compete for the Stanley Cup, but playoff hockey is an entirely different animal.

The fate of the 2015-16 Penguins depends on the blueline, how well the youth adapt and if they can remain healthy. With the noted issues, it’s clear that the defense could limit the team. It’s a radical change from last season when quite a few recognized how the Penguins were becoming one of the best defensive teams in hockey.

Next season depends entirely on the youth, if they can live up to expectations the Penguins were be a force to be reckoned with. But if they fall short, let’s just say it could a long season where Sidney Crosby and Evgeni Malkin are forced to outscore the opposing team by three goals a night to win.