It’s something the Flyers have severely lacked, and greatly mismanaged for a long time now. Patrick Sharp, James van Riemsdyk, and many draft picks for players who could be classified as short term fixes. It’s been almost like an addiction for the Flyers over the past few seasons. Player x doesn’t pan out in his first two years? Trade him.

And that right there is why the Flyers have seen just one Cup Final in the last two decades.

The good news? This is the first time in a very long time that things are shaping up to be very different.

Trading JVR was not one of the Flyers’ better ideas. (Icon SMI)

Despite their recent struggles, and a few ver, very bad contracts at the end of Paul Holmgren’s tenure, the Flyers haven’t given up a notable prospect or  “young guy” since James van Riemsdyk in 2012. That says a lot about the direction this team is going, especially when you look at the list of prospects that tout; Travis Sanheim, Shayne Gostisbehere, Samuel Morin, Robert Hagg, Scott Laughton, Taylor Leier, just to name a few. That’s on top of guys who are already working their way up, like Brayden Schenn, Sean Couturier, and Jakub Voracek.

Speaking of Schenn and Couturier…..

By the end of this past season, most people in Philadelphia were aware that Craig Berube had lost this team. No direction, no fire, no nothing. However, Berube’s misuse of Sean Couturier and line juggling of Brayden Schenn probably stinted their numbers. In fact, it’s pretty amazing that Couturier put up the numbers he did, given his usage.

So what’s the difference now?

First and foremost the coach. Many fans (myself included) did not know much about Dave Hakstol. After some quick reading, you’ll quickly realize he was just what the Flyers needed. I’ll be the first one to admit, college hockey and the NHL are two very different ballgames, and 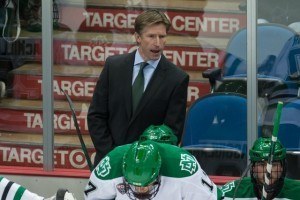 the Flyers will need a transition period to implement Hakstol’s system, but that’s besides the point right now.

Hakstol’s history with developing players is something the Flyers need, and have not seen in a long time. Hakstol has coached and helped send many players to the NHL. Jonathan Toews and TJ Oshie are just two of those players.

The next few years will involve a transition period for the Flyers. Hakstol will need to help ease in young defensemen, and also place Couturier and Schenn into the roles they hadn’t been able to fulfill under Craig Berube.

As the title says, the Flyers need to go all in with their youth. Contracts for the older guys are going to start to expire, and on defense especially, the Flyers will be completely revamped. Hextall has this team on the right path, and has demonstrated by the moves that he has (or hasn’t) made, that he believes in the youth that the Flyers have. He went outside the box by hiring Hakstol, and it could pay huge dividends, especially for the youth on this team.

The Flyers are on the right path, it’s unfamiliar territory for a lot of fans, but that’s how today’s NHL works. Be patient, their time will come.