Detroit Red Wings fans have been blessed to watch Gordie Howe, Steve Yzerman, Ted Lindsay, and other greats don the Winged Wheel over the franchise’s history. Following their respective retirements, their numbers have been raised to the rafters of Joe Louis Arena as a tribute to success they contributed to the Red Wings. With Nicklas Lidstrom’s #5 being the last number to be retired, there’s debate about the next number that will join those honored by the Red Wings.

Since joining the Red Wings in 2001, Datsyuk has been dazzling fans with impossible moves on the ice. He was a part of the Hall of Fame team to win the Cup in 2002 and has been a major contributor to the Red Wings ever since.

He has been one of the best players in the league throughout his career following Steve Yzerman’s lead in playing a two-way game. Datsyuk is a surefire Hall of Famer when he decides to hang up his skates and will certainly be honored by the Red Wings for his contributions to their success over the past 15 years. 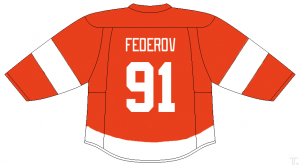 The retiring of Sergei Fedorov’s No. 91 is long overdue. There were many issues between Red Wings’ management and Fedorov, most of them related to compensation. When he chose to leave Detroit for Anaheim in 2003, it was because the Mighty Ducks were offering an extra year on his contract.

The reality is that Fedorov was one of the best ever to wear the winged wheel. In 13 seasons with the Red Wings, the Russian-born dynamo amassed 954 points through 903 games, which places him fifth all-time in scoring for the team. The Red Wings have kept No. 91 out of circulation for this long – they could have allowed Brad Richards to wear No. 91 this season, but they did not. With Fedorov entering the Hockey Hall of Fame this season, it would be fitting to see his jersey raised to the rafters in Detroit in the very near future. 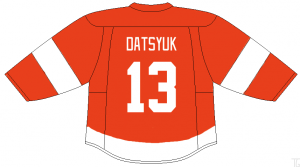 When the Detroit Red Wings opened training camp before the 2001-02 season, their 1998 sixth-round draft pick came in under the radar. That sixth-round pick made the team as a 23-year-old and went on to be one of the best players to wear the Winged Wheel in the past 13 seasons.

That 23-year-old was Pavel Datsyuk.

Out of all the men to play for the Red Wings from the 80s onward, the men with the two highest point totals are Steve Yzerman, and Nick Lidstrom. Third on that list? Sergei Fedorov.

The man who put up a staggering 954 points in 908 games with the Red Wings is quite deserved of a retired number, or at the very least, a number that is honoured by the Red Wings. With 85 points more than Pavel Datsyuk, and 163 more than Henrik Zetterberg, it’s very possible that Fedorov keeps his place on the Red Wings all-time list for a number of years.

What’s that? You want more impressive numbers for one of the founding members of the Russian Five with the Red Wings? 163 points in 162 playoff games, 3 Stanley Cups, 6 time All-Star, Hart Trophy winner, Lester B. Pearson Award winner, 2-time Selke Award winner, most career overtime points, first Russian to reach 1,000 points, most goals by a Russian born player, and an all around astounding career with the Red Wings. Expect to see number 91 hanging in the rafters, as Fedorov is the only Red Wings player to ever wear the number.