With a 32-22-11 record, the Detroit Red Wings currently sit in fourth place in the Atlantic Division and hold the top wild card spot in the Eastern Conference. Much has been said about the Red Wings’ current 24-season playoff streak. Jeff Blashill and the team are looking to continue the streak with a 25th consecutive playoff appearance this spring.

But who would give the Red Wings the best matchup in the first round? Boston, Florida, and Tampa Bay all currently sit ahead of the Red Wings in the Atlantic Division standings. Additionally, if another team leapfrogs the Red Wings in the standings, Detroit will have to open the playoffs at Washington against the likely Presidents’ Trophy-winning Capitals.

In this week’s column from The Grind Line, the Red Wings coverage team for The Hockey Writers take their picks for Detroit’s first round opponent. 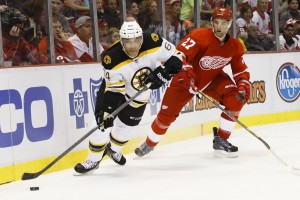 Though the Bruins are still a bruising team, they are now without Red Wing-killers Dougie Hamilton and Milan Lucic, who have been dealt to Western Conference teams. In three games against the Bruins this year, the Red Wings are 1-1-1, with their two losses coming early in the season. The latest game was a barn-burner, with the Red Wings putting six past Tuukka Rask in a 6-5 home victory.

In comparing the Bruins to the two Florida teams and the Capitals, Boston does not have as deep a roster and has a weaker offense. The Red Wings have (mostly) struggled to score goals this season and would likely prefer to play a team they’ve scored six against in one game. Boston has also given up far more goals than the other three teams. Washington, Florida, and Tampa Bay are all in the top-five for least goals against, while Boston sits in 19th place in that category.

Because of Boston’s tendency to let in more goals than the other possible opponents, they are the best first round matchup for the offensively challenged Red Wings. They are also a less physical team than in seasons past—much to the delight of the smaller, skilled Red Wings. 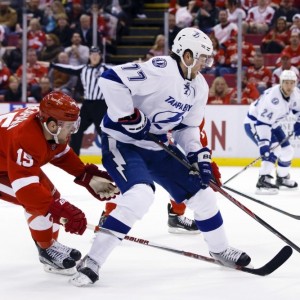 What better choice is there than the team that ousted the Detroit Red Wings in the first round of last year’s playoffs? Surely, the Wings (and their fan base) would enjoy some revenge against the Tampa Bay Lightning. Beyond that, the matchup against the two teams was just plain fun to watch.

The difference makers for Tampa Bay were forward Tyler Johnson and goaltender Ben Bishop. Johnson was the Lightning’s most potent offensive weapon throughout the series, finishing with six goals and one assist against the Wings. For his part, Bishop posted an impressive 1.87 GAA and .922 save percentage against Detroit. He made several timely stops through the series, and shut the Red Wings out in game seven.

So what makes this year different from last? Maybe nothing. Quite honestly, I’m not totally confident the Red Wings would fare any better against the Lightning. It’s entirely possible that the inexperienced Florida Panthers would be a better draw for the Wings, but I’d much rather see the team redeem themselves against Tampa Bay.

Though he has struggled of late, Petr Mrazek has another year of experience under his belt, one where he has taken over the role as the number one netminder in Detroit. While he’s had a shaky outing or two against the Lightning, he also pitched two shutouts against them in games three and five of last year’s playoffs. Overall, he posted a very respectable 2.11 GAA and a .925 save percentage in the series.

The Red Wings also have a pair of young rookies with plenty of skill and speed to spare. With 39 points through 63 games, Dylan Larkin sits second in scoring amongst all Red Wings players. Andreas Athanasiou could also be a difference-maker for Detroit. Since his call up from Grand Rapids on February 6th, the speedy center has notched six points in 14 games. Both players could provide the extra scoring punch that Detroit would need to push past Tampa Bay, should we be lucky enough to witness a rematch against the two teams this year. 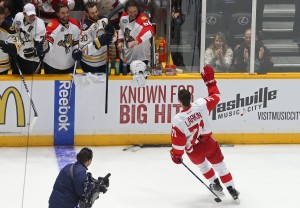 While the Florida Panthers have been good—leading the Atlantic Division for most of the season, good—they’re a young and inexperienced team when it comes to the playoffs. Playing an inexperienced team certainly has its benefits; Tampa Bay’s first-round exit in 2014 (albeit with starting goaltender Ben Bishop) was a necessary step in their march to the Stanley Cup Finals in 2015.

Florida does have a strong veteran presence with a roster that boasts names including Jaromir Jagr, Willie Mitchell, Shawn Thornton, Brian Campbell, Dave Bolland, and Jiri Hudler, who have all combined for nine Stanley Cups.

Veteran presence is important in the playoffs and Florida general manager Dale Tallon acknowledged that by acquiring Hudler and Teddy Purcell at the trade deadline in an effort to make some noise come playoff time. However, top players including Aleksander Barkov, Jonathan Huberdeau, Aaron Ekblad and Nick Bjugstad have never played an NHL playoff game and will have to learn on the job the pressure, speed and grind of an NHL playoff series.

The x-factor of the series would be goaltending. Roberto Luongo and Petr Mrazek have had great seasons, each with their name attached to the Vezina Trophy race at times. Back in 2011 Luongo came as close as he could to his first Stanley Cup, losing in seven games to the Boston Bruins in the finals. At 36, Luongo is well-aware that his chances at a Cup are slimming.

As a rookie last year, Mrazek was lights out for Detroit in 2015 against Tampa Bay before losing to the Lightning in seven games. Mrazek posted two shutouts with a .925 SV% and 2.11 GAA.

At the end of the day, Detroit is a roster well mixed with veteran know-how, youth, playoff experience and a new coach eager to make his mark. Florida should be Detroit’s easiest opponent if the two teams find themselves matched up in the opening round of the 2016 playoffs.

Who do you think would be the best opponent for the Red Wings come playoff time? Discuss below or tweet at us: @THW_RedWings