Alexander Burmistrov (Click on name for up- to- date stats)

Perhaps the biggest question when considering prospects such as Burmistrov is a phrase I have coined “Russian Roulette”, rather than simple the Russian factor which many other scouts/writers use. This places an even great emphasis on the potential risk involved with Russian prospects, even more so in recent years. (See “Russian Roulette” section below for further discussion).

While Burmistrov may not reach even 75% of the level with which they play, he might be best described in the mold of former Russian great Igor Larionov and present NHLer Pavel Datsyuk.

He will have to beef up to take on the rigors of the big league, but his work eihic suggests this won’t be a big issue for him.

Some call it the infamous Russian Factor. Because of developments in recent years such as lack of transfer agreement and the KHL enticing players, I go as far as calling it the “Russian Roulette” Factor.

Burmistrov might be the exception to the rule and might not need to worry about his desire to play in NHL. He told NHL.com: “I don’t know, I really wanted to play in OHL and Canada. It’s my dream to play NHL. My father played before hockey and told me, it’s okay, you want play NHL, you go play hockey in Canada.”

“You have to see this scout in Under Armour to understand what he needs to do. I don’t care how dynamic you are, he’s 146 pounds and built like Gilligan. But I like his compete level.”
– A scout  in The Hockey News Draft Preview 2010 (Surprising that they actually rank Alex 6th overall)

“He’s like a water spider out there on the ice. Light on his feet, but he’s got a venomous strike like a snake when he goes on the offense. Speed and agility, great fakes and he’ll bring players, fans, alike out of their seats. I’d compare him with a (Alexei) Kovalev, (Sergei) Samsonov or (Maxim) Afinogenov.”
– E.J. McGuire, Director of Central Scouting

“He’s got a great hockey IQ, and is a wonderful skater. He has a habit of playing well above his size and has a great feel for timing on the ice. He battles hard and is continually working on his shot to become an effective scorer, but he is a great passer and has great vision on the ice.” – Barrie Colts head coach Marty Williamson

“Burmistrov is very skilled with the puck and able to make plays while at top speed, and does not panic when under pressure. Burmistrov is a speedy offensive threat who really takes advantage of the space his teammates can make for him. He has tremendous offensive instincts and is tenacious in offensive situations. A calm and calculated player during zone play, Burmistrov has outstanding edge control and balance and can change his pace before defenders can even think to adjust.”
– International Scouting Services NHL Draft Guide 2010

*Relatively high risk rating only because of the discussed mentioned “Russian Roulette” Factor. 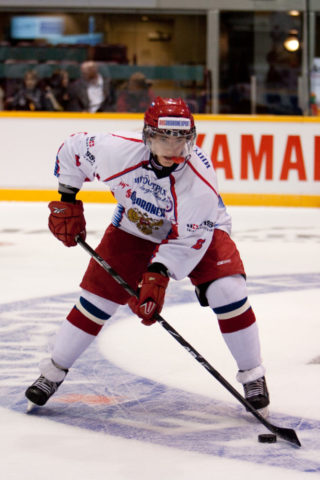 – At his best: Pavel Datsyuk

“He wears the jersey number eight as a tribute to former Russian NHL star Igor Larionov and he patterns his game after his favorite player, Pavel Datsyuk.”