*Also note, “We’re pleased to announce that The Hockey Writers will be hosting a webcast covering the entire First Round of the 2010 NHL Entry Draft, being held in Los Angeles on June 25th. We’ll be webcasting live from the Rbar, in the shadow of Nationwide Arena, from the beautiful Arena District in downtown Columbus, Ohio.”

*Check out and bookmark this link for more information on the Live Draft Coverage!

There are some changes in store for this years preview. I have recently just returned from a month long amazing European Vacation. And “no” to NHL scouts and GMs I did not uncover any hidden hockey gem prospects while touring Southern Germany, Vienna, Transylvania and Bucharest. Obviously, this has cut into my preparation time, but there is still plenty of information to be had and yet to be revealed.

The profiles are even more jam-packed with information this year with additional categories.

ISS = International Scouting Services (These are taken from their May Top 30 rankings or THN’s quoted ISS ranking, where available.)

{Click on Prospect’s Name for link to “Full Potential” Profile} 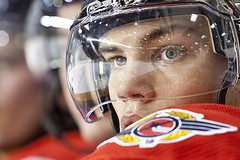 {Note: There are differences between the mock drafts and the above rankings.}