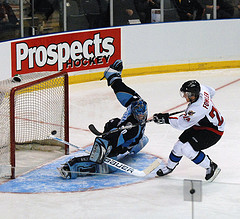 One-Timer: While Brandon Gormley and Erik Gudbranson may have narrowed the gap, Fowler is still the clear cut number one blueliner for the 2010 draft class. Drawing comparisons to the likes of Drew Doughty, Niedermayer and Rob Blake, if he can continue to develop his physical play, Fowler has the potential to be a franchise defenseman.

He is an elite skating, savvy puck carrying, two-way blueliner.  Should he tap into all his potential, and his work ethic and attitude suggest he will, Fowler could very well be a top 10 point-producing  blueliner in the big leagues in the not so distant future.

While Fowler may have taken a backseat to Taylor Hall and Tyler Seguin for the running of the top two prospects drafted, I would be mighty surprised if he falls behind the #3 draft slot.

“The NHL’s Central Scouting Bureau has Fowler as the No. 3 prospect overall among North American skaters and the No. 1 defenceman, but a scout for International Scouting Service didn’t hesitate to say Fowler has dropped to No. 4 overall on that list and is second among defencemen behind Kingston’s Erik Gudbranson.

The six-foot-two, 190-pound Fowler isn’t physical enough for his liking.”

The Hockey Spy’s Take: I am honestly not sure why the narrow-minded focus on his physical play. Elite NHL blueliners such as Nik Lidstrom and Duncan Keith get the job done in their own zone effectively and efficiently without highlight reel hits. To his credit, Fowler recognizes what scouts have seemingly been discussing and is focusing on improving that aspect of his game.He is also said to have a good active stick in the defensive zone.

After notching 40points in 47 games last season with the USNTDP-U18 team, Fowler continues to put up impressive offensive numbers with 55 points (8G, 47A) in 55 regular season games while patrolling the blueline for the Windsor Spitfires this year.

While Cam failed to notch a point in the top prospects game held in January, he was the only player to register a plus 4 rating.

From The Detroit News: Fowler was in the Fastest Skater competition, going up against Hall. Fowler was third with a time of 14.612.

*Coming Down The Pipe

“B2010DW: Who are some of the toughest players you’ve competed against at home and internationally over the past two years and why?

CF: That’s a tough one, but I’ll say Taylor Hall first of all, because it was definitely a challenge for me to go from using him as a teammate to give him the puck to do his thing to having to stop him, because he’s so fast and skilled.”

2009-10: Fowler notched 2 assists and 4 PIM in 7 contests for the gold medal winning Team USA squad. The stats don’t tell the whole story as he displayed great composure on the blueline and was an important cog for USA.

2008-09: From Hockeys Future:  “Played for the U.S. NTDP U-18 team. Earned a gold medal at the 2008 Men’s Under-18 Four Nations Cup, leading all defensemen in that tournament in scoring.  Also earned a gold medal as a member of Team USA’s entry at the 2009 World Under-18 Championship in Fargo, North Dakota.  Fowler was named the best defenseman in that tournament, and was named to the tournament All-Star team.”

*Composure and poise with the puck.

*The Scouting Report reports: “…could probably afford to shoot the puck a bit more. Scouts also would probably like to see Fowler utilize his size more as it is surely an asset to his game.”

*He also needs to better choose shooting lanes on the offense, as well as not forcing to rush the puck offensively and thus avoiding needless turnovers.

*To his credit, Fowler realizes what he needs to work on and is especially addressing the level of physicality issue, as Jim Parker of the Windsor Star recently reported.

– At his best: Rob Blake (if can raise physical aspect of his game), Scott Niedermayer, Brian Leetch, Drew Doughty

– At his worst: Oleg Tverdovsky, Wade Redden (of past few seasons)

“Although he considers himself a Michigander, Fowler is now playing in front of his true hometown fans in the OHL; he was actually born in Windsor to Perry and Bridget Fowler, and possesses dual Canadian-U.S. citizenship by virtue of his mother being a native of the Detroit suburb of Grosse Pointe. When he was about 1½ , his father [originally from Newfoundland], an employee of Ford Motor Company, was transferred from Ontario to Michigan, where the family has been ever since.”