Things were different back then. It’s pretty safe to say some of the events of January 1967 would not happen in today’s NHL. Now, depending on your age, you may think of 1967 as ancient times. Really, in overall NHL history, 1967 is more like the middle ages. The NHL was 50 years old, but most players still didn’t wear helmets. So players kept their sticks on the ice and everybody politely respected each other. Not really, as you’ll see in a second.

I’ve often been asked by hockey fans and hockey history lovers for my favorite books or websites on hockey history. There are obviously many, but one source stands out mainly because the stories are written in the context of their concurrent times. If you want to know exactly what was going on in the hockey world in January of 1967, for example, my recommended source would be the four issues of The Hockey News dated January 7, 14, 21 and 28, 1967. Back dated copies are always available on eBay. I’m always buying, reading and then re-selling old issues. You’re almost always guaranteed to find at least one amusing or revealing item of interest. Hey, you may even finally confirm that old tale your father once told you when you were a kid. Chances are, he exaggerated slightly.

That’s what I did. I bought the four January/67 issues of The Hockey News on eBay. I politely asked the good people at The Hockey News if I could reproduce some of the pictures and content to share with you. They willingly obliged.

Let’s start with a believe-it-or-not type item. Did you know that on Christmas Day in Bobby Orr’s rookie season, the player deemed to be the NHL’s all-time greatest defenseman actually played Center for most of the game that night against the Toronto Maple Leafs? Not a big deal was made of it back then, but somehow, it’s difficult to believe Bobby Orr ever played forward in the NHL. He even picked up a couple of points. Great trivia! The NHL continued to schedule games on Christmas Day until 1971.

In the same January 7, 1967 THN issue, there’s a story about Gary Smith, the wandering goalie. One time, he actually stickhandled all the way to center ice before passing off to a teammate. The NHL had to put in new rules just because of him. Great stuff!

In the January 14, 1967 issue, there’s a neat article about how future Hall-of-Famer Dick Duff has been injured for a significant chunk of the first half of the schedule, yet in 23 games played, he has scored 4 goals – all against the Chicago Black Hawks. Uncanny! There has to be some kind of trivia question here. You have to remember, the 1966-67 season was the last of the “Original Six” and each team played each other 14 times. Still, at the half way point in mid-January, Dick could only get lucky against Chicago.

I’m glad I’m able to reproduce Page 2 of the January 21, 1967 issue for you; otherwise, you’d never believe me. Montreal Canadiens’ tough guy John Ferguson crashes the Red Wings net, whacks goalie Roger Crozier over the head, and scores. It counts. No dispute from the Wings. In fact, Crozier is said to have “respect for Mr. Ferguson well etched in his mind.” It seems head shots was not forefront on the agenda in 1967. 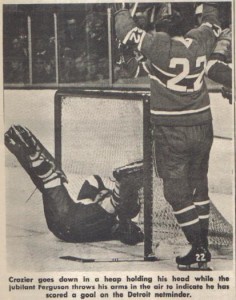 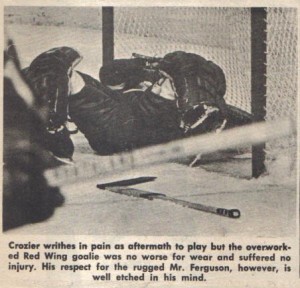 Of course, old copies of The Hockey News are invaluable for their unique and precious vintage photos. The January 28, 1967 issue includes a snapshot of the immortal Tim Horton defending the zone against two attacking Black Hawks. The expression on his face is priceless. The Black Hawk players seem unsure they want to test Timmy. Who could blame them?

This issue also unveils the original team emblem of the Minnesota North Stars, one of six new teams scheduled to enter the NHL next season in an unprecedented doubling in league size.

There was a lot going on in January of 1967. The Black Hawks were in first place where they’d finish for the first time in team history. That must have been sufficient for them. They choked in the playoffs later on. But that was in April. We’ll save that for another time.